It’s been announced this week by Samsung LCD Netherlands R & D Center (SNRC)’s Johan Feenstra that the company will begin mass production of their own next generation e-reader displays starting in 2013. Through the company that Samsung purchased specifically to make their own company bring such technology to the market, we’ve already had a glimpse of what was once just known as Liquavista’s ElectroWetting display. This new-world e-reader-bound technology is able to not only display text and black and white images with great success and next to no power consumed, it’s able to play videos and flip through pages of content without the relatively massive refresh time an e-ink display still does today.

The news here is that this new technology might be hitting shelves within a year from today. Feenstra was not shy about telling the world how close Samsung was to bringing the tech to the e-reader market, he noting this at a digital reading and tablet event in Bussum earlier this week. Feenstra noted that they’re currently concentrating on a 9.7-inch prototype that they hope to show off soon. 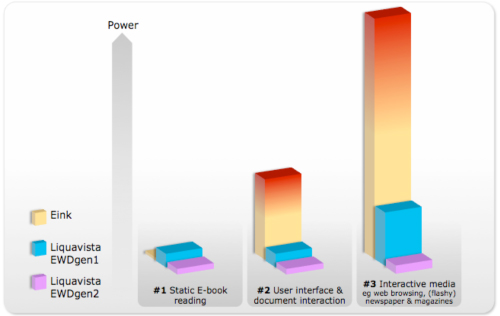 Samsung’s new technology is set to improve on current e-reader displays while dramatically reducing battery draw. This means improved ability to show off color as well as black and white paper-like display and more than double the already excellent battery life e-readers have on the whole. And given the current market for e-readers at less than $100 a pop here in the USA, we can expect excellent prices as well!

Have a peek at this demonstration of LiquaVista’s solution from all the way back in 2010 – we’re expecting vast improvements in the meantime!