When reviewing the 7-inch tablet known as the Samsung Galaxy Tab 2 7.0, we mostly stuck to describing its graces and faults in and of itself, but this week Samsung has released several charts comparing the device to two of what they see as its main rivals. You’ll find that Samsung has quite a few areas it’s eager to show off as superior here in the Galaxy Tab 2 that, shown here, certainly seem to be lacking in the competition. Is it time for e-readers to step up their game and go Android without the extra skin, or will the two other champions of text-based media here in the tablet universe beat out Samsung’s newest effort?

Samsung’s Galaxy Tab 2 lineup includes both this 7-inch version and a 10.1-inch version whose specifications include many of the same features with an added bonus of front-facing speakers and a slightly larger display. Both Galaxy Tab 2 units have dual-core 1GHz Texas Instruments processors and are generally capable of handling all basic apps in the market and certainly capable of working with ebooks, music, and videos galore. What these charts compare though, are the Galaxy Tab 2 line’s ability to connect and expand. You’ll also find that Samsung’s tablet here is a bit lighter, has two cameras instead of none, and has access to the Google Play store.

Check out our review of the Galaxy Tab 2 as well as our hands-on look at the newest NOOK tablet.

What the other device lack here, as Samsung has made clear, is the ability to run Android essentially as Google presents it. Both the competitors here in the ebook space take Android and change it drastically to fit their own needs for their own stores and ecosystems for books and media. You’ll find that they’re a bit less expensive too – by $50 in their cheapest iterations. What Samsung has done here is to take out the contest each tablet was built in and create a set of charts that has these devices specifications rated against one another one to one to one. Have a peek at each chart enlarged in the gallery below. 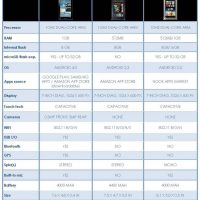 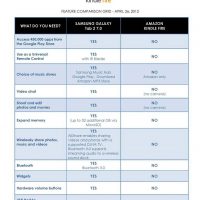 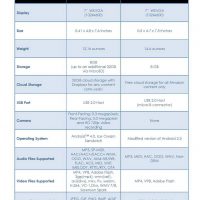