Back during CES 2015, Samsung revealed a curved all-in-one PC, the Samsung ATIV One 7 Curved. The maker revealed its slew of specs at the time, as well as its snazzy curved display, but was less specific when it came to revealing its launch date, saying only that it would be arriving in the first quarter of this year. Fast-forward a couple months, and we’ve finally been given a more specific launch date: March 8. As of yesterday, the maker’s notable AiO is now shipping to customers who pre-ordered.

You can grab the PC from Samsung’s website, where it is being offered for $1,299.99, and is currently listed as shipping in four to six weeks. With it comes a 27-inch Full HD curved display, a swell as an Intel Core i5 5200U processor, 8GB of memory, and Intel HD Graphics 5500. Storage is hefty at 1TB, and the system is loaded with Windows 8.1 64-bit.

As far as more specific details go, you’ll get an anti-reflective coating with that display, which has a 16:9 aspect ratio and 300nit brightness (LED backlight). Sound comes via a pair of 10W speakers and Dolby Surround. The webcam is up to par with the rest of the hardware, offering 1080p FHD resolution. There’s an integrated mic, as well as a combo audio (headphone/mic) port.

Connectivity includes Bluetooth 4.0, 802.11ac Wi-Fi, WiDi, HDMI in/out, a 3-in-1 SD/SDHC/SDXC card reader, and RJ45. As with most all-in-one systems, it comes with a keyboard and mouse, both of which are wireless. And whether you consider it a good thing or not, Samsung has loaded its SideSync 3.0 and Link 2.0 software onto the system. 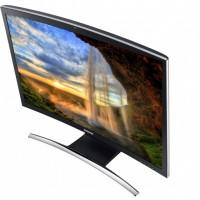 Topics All in oneComputingPCSamsung
Must Read Bits & Bytes