Samsung has demonstrated a 55-inch glasses-free 3D HDTV prototype which, the company claims, could be commercially ready in just three years time. Shown at FPD China 2011 this week, Tech-On reports, the display actually uses two LCD panels: one for the actual picture, and another, overlaid on top, the optical refraction index of which can be changed to flip between 2D and 3D modes.

In that way it can operate as a lens, splitting the picture being displayed between the left and right eyes of those watching. As with other glasses-free 3D technologies there are a limited number of “sweet spots” within which the picture can be viewed: in the Samsung’s case, that’s nine, with the optimal viewing distance being 2.5 to 6 meters.

As for the underlying panel, that’s running at Full HD 1920 x 1080 resolution with 500 cd/m2 brightness and a 4,000:1 contrast ratio. The prototype uses a CCFL backlight, but according to Samsung “we can replace it with an LED backlight unit.” Whether it actually will make it to market is yet to be decided – as is the price it might command – but if so Samsung reckons “it will take about three years to commercialize it.”

Update: Looks like this was too good to be true; Samsung has told SlashGear the three year estimate was off the mark. 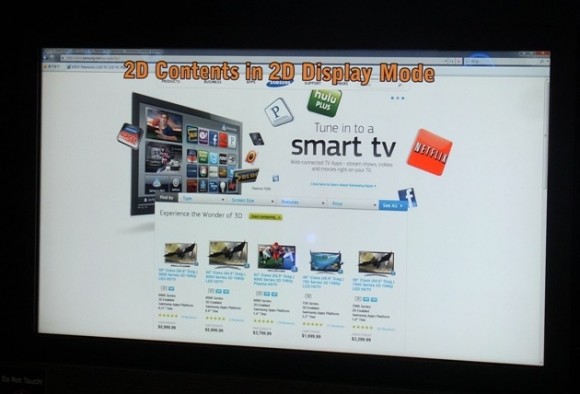