Google’s Jacquard touch-sensitive fabric tech continues to spread, with the new Samsonite Konnect-i Backpack weaving gesture recognition right into the strap. Able to remotely control your phone with taps and swipes, Jacquard is a subtle but smart addition to what’s otherwise a fairly unobtrusive bag. Read on for what works and what isn’t quite there yet.

There’ll be two versions of the backpack, one “slim” at $199.99 and the other “standard” sized at $219.99. Samsonite says both can hold a 15.6-inch laptop; a 16-inch MacBook Pro slotted in snuggly. There’s also a tablet pouch, and then a separate compartment for things like your camera, lenses, notepads, or anything else. It’s all lined in a lighter silver and contrasting blue fabric, making it easier to see what you’ve stowed away. 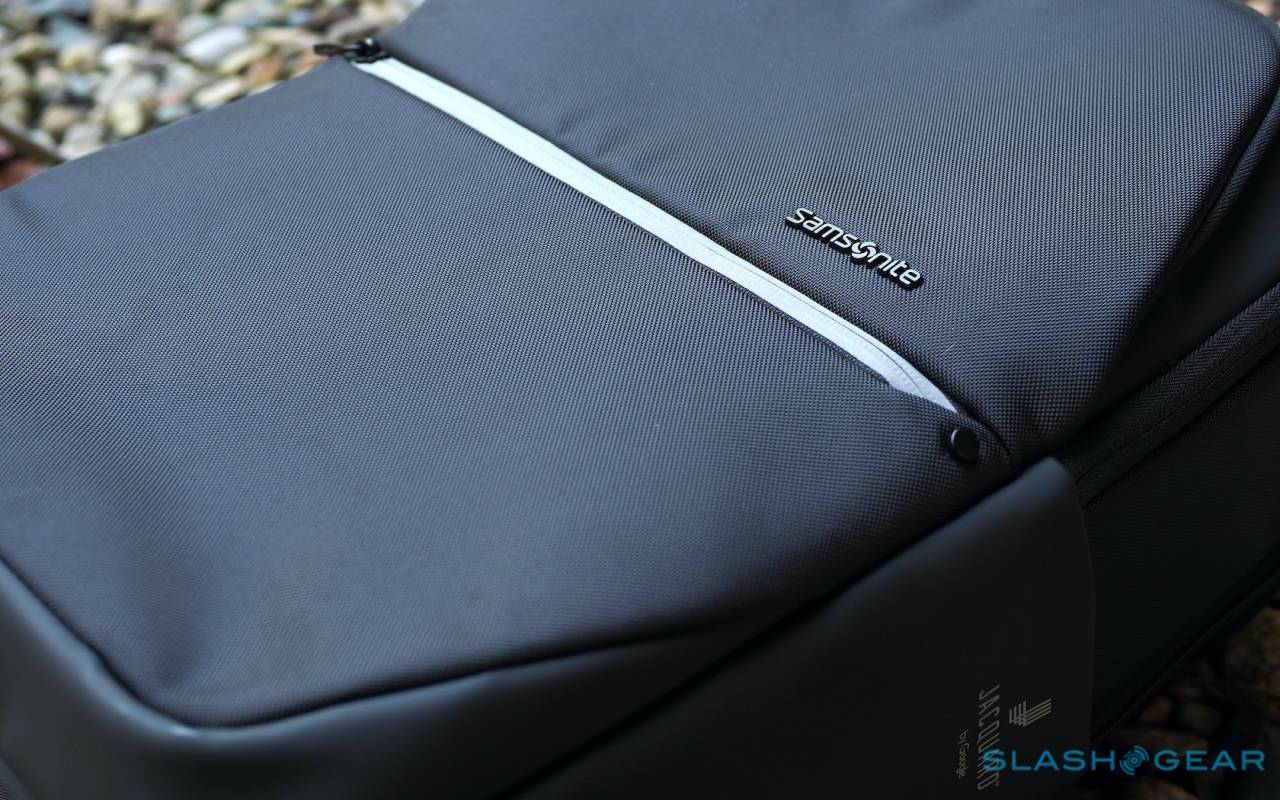 I’ve been testing the Standard Backpack, and it’s surprisingly capacious. Helping cut through the disorder is the sheer number of different pouches and pockets for organization. There are three external zipped pockets – two on the front which each have further subdivision and pen holders, and then one on the top – while both the main compartment and the well-padded laptop section also have separate pockets for documents, cables, and other small objects. The only thing I missed was a keychain clip. 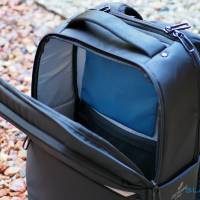 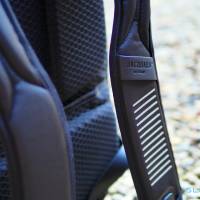 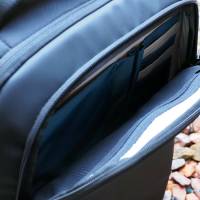 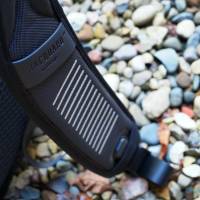 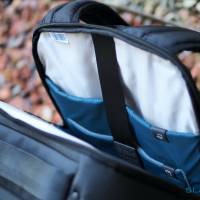 The black, water-repellent polyester isn’t going to turn heads, but I’m of a mind that that’s a good thing overall. A thin strip of reflective silver runs across the center. As for the back panel, that has thick padding and the straps seem well-reinforced. There’s also a horizontal sleeve that can slide over the handles of your carry-on suitcase.

What sets the Konnect-i Backpack apart from the rest of Samsonite’s bags, of course, is Jacquard. The left strap has Google’s touch sensors woven into it, above a nook where the Jacquard tag clips into place. It’s a fairly tight fit, and half-covered with an elastic strap, so I’m pretty confident the Bluetooth dongle won’t get shaken out inadvertently even if you’re stuffing the bag under a seat or throwing it in the back of the car. 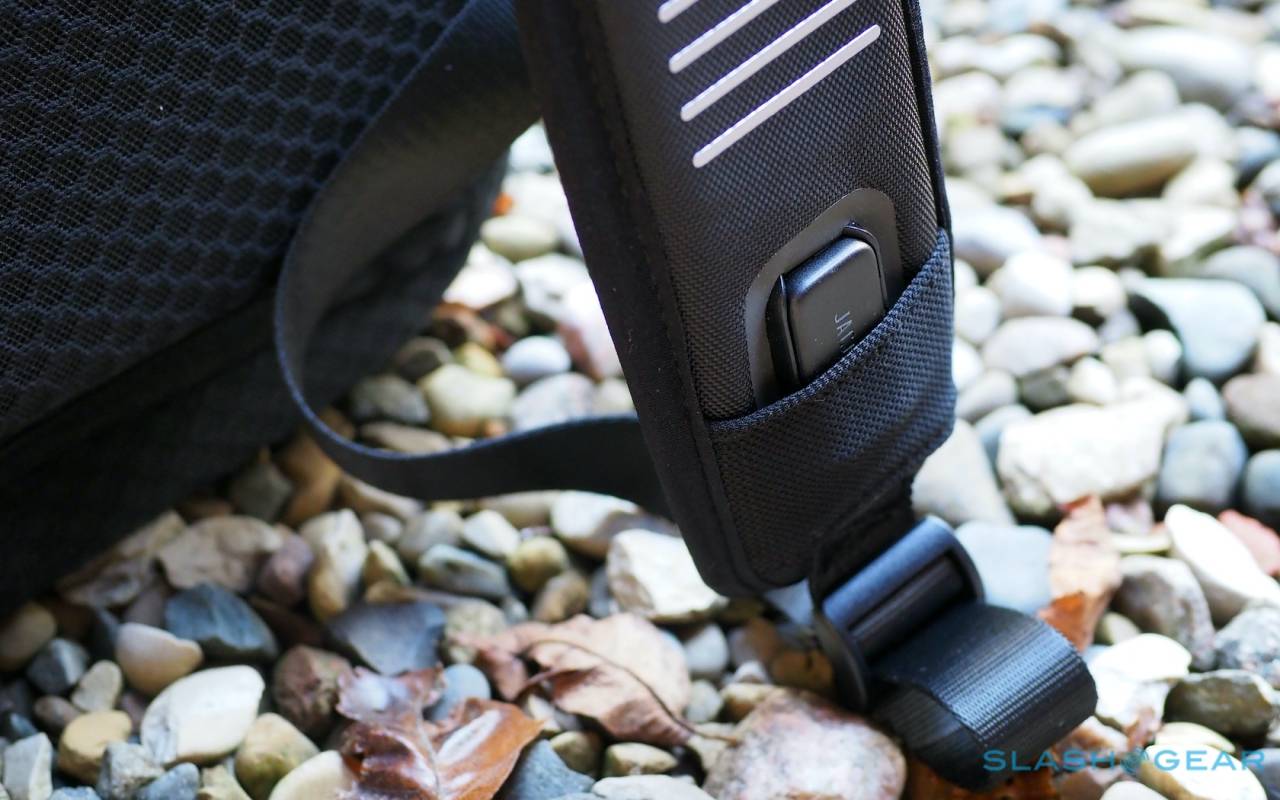 Just like other Jacquard-powered wearables such as Levi’s jackets, the sensor strip can track taps, long-holds, and brushes up and down. You’re not going to be using the Konnect-i Backpack as a keyboard alternative: instead, it’s for basic controls like adjusting music playback, handling incoming phone calls and texts, triggering the Google Assistant, and dealing with pedestrian or bike navigation. 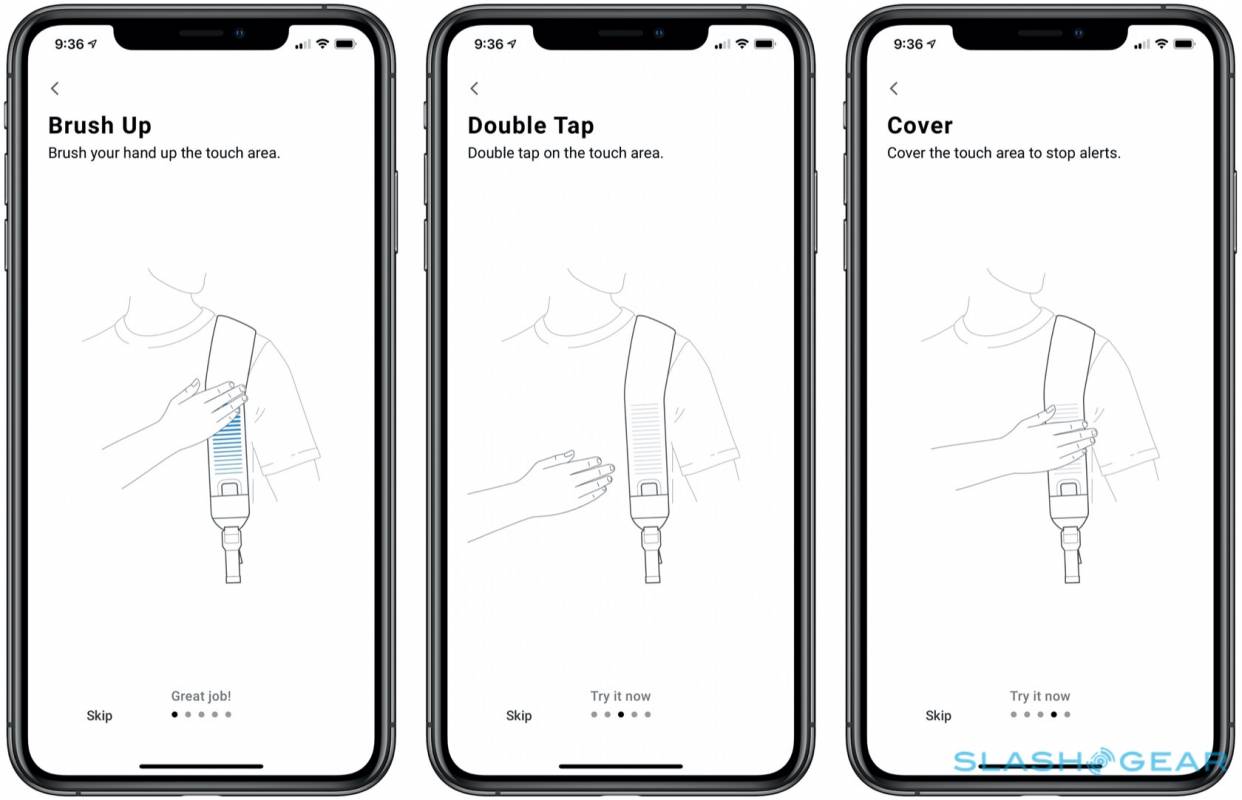 You set all that up in the Jacquard app, which is available for Android and iOS devices. Brushing down across the sensor strip, for example, could skip your music forward a track, or answer a call. Tapping it might announce what’s currently playing, while holding your hand on the sensor strip could launch the Assistant. There’s an LED and subtle vibration to show when a gesture has been recognized, and three colors of LED blinking – blue, green, and pink – which can be assigned to notifications like VIP calls and texts, if your bag is separated from your phone, or when your rideshare is about to arrive. 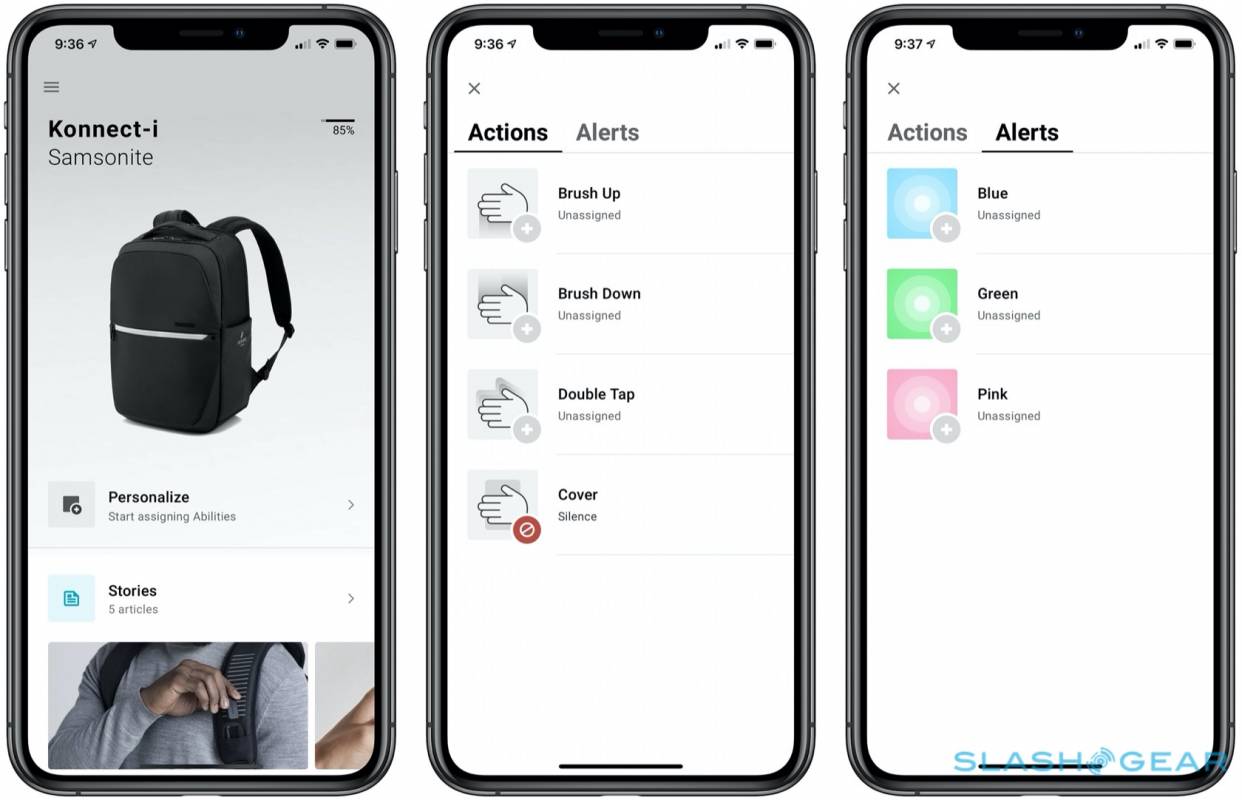 While I can control what Spotify is playing from my Apple Watch, Jacquard offers some more esoteric options. You can assign a gesture to keep track of counting something, or drop pins in Google Maps to record locations. You could trigger an Assistant-powered summary of your day, assuming you’ve granted Google’s AI access to your calendar and such, or even have it trigger the camera app for a selfie. 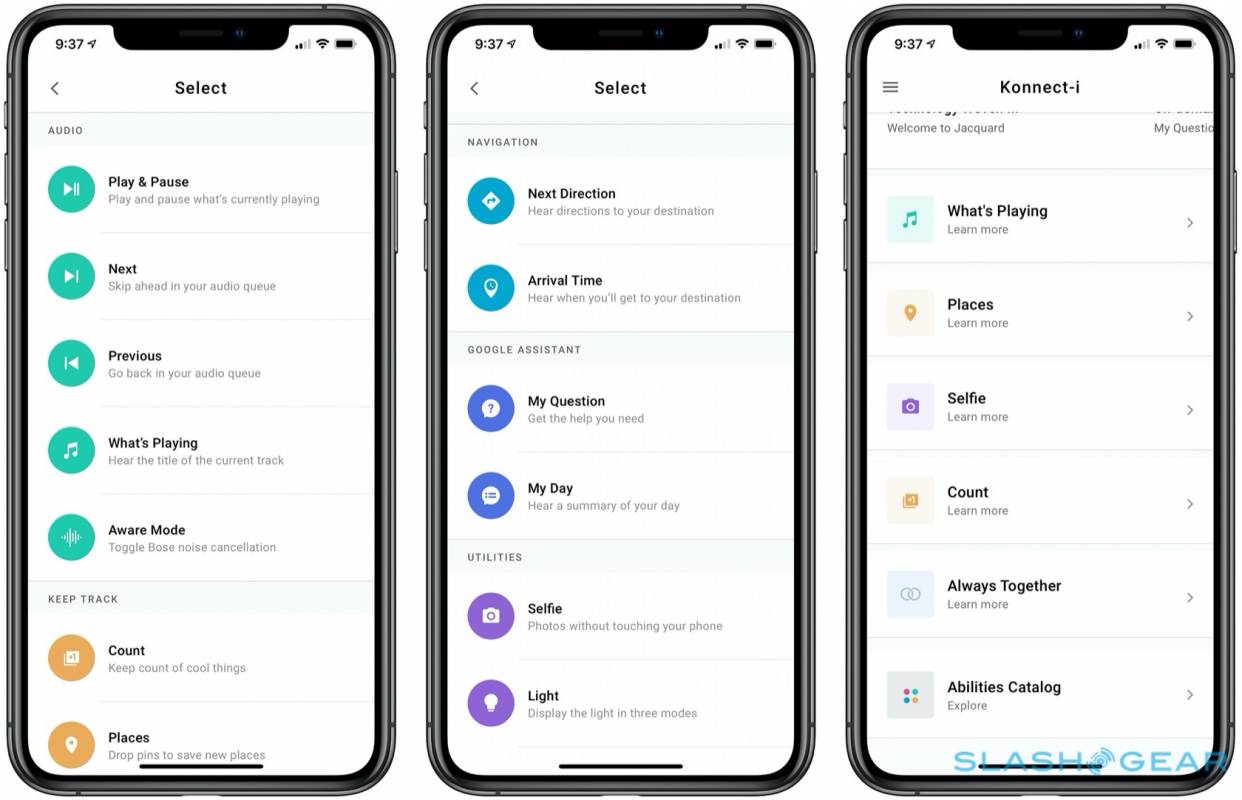 It’s clever stuff, but I wish Google had gone a little further. Just like it has Routines on Google Home – turning off all the lights bar a nightlight and pausing the music in one fell swoop when you trigger a “goodnight” routine, for example – it would be great to be able to assign Jacquard triggers to a series of actions. If I’m about to get home, for instance, it’d be useful for a long-press of the Jacquard strip to turn on the lights, message my spouse that I’m safely back, and start my favorite playlist. Even just IFTTT integration would be a neat workaround. 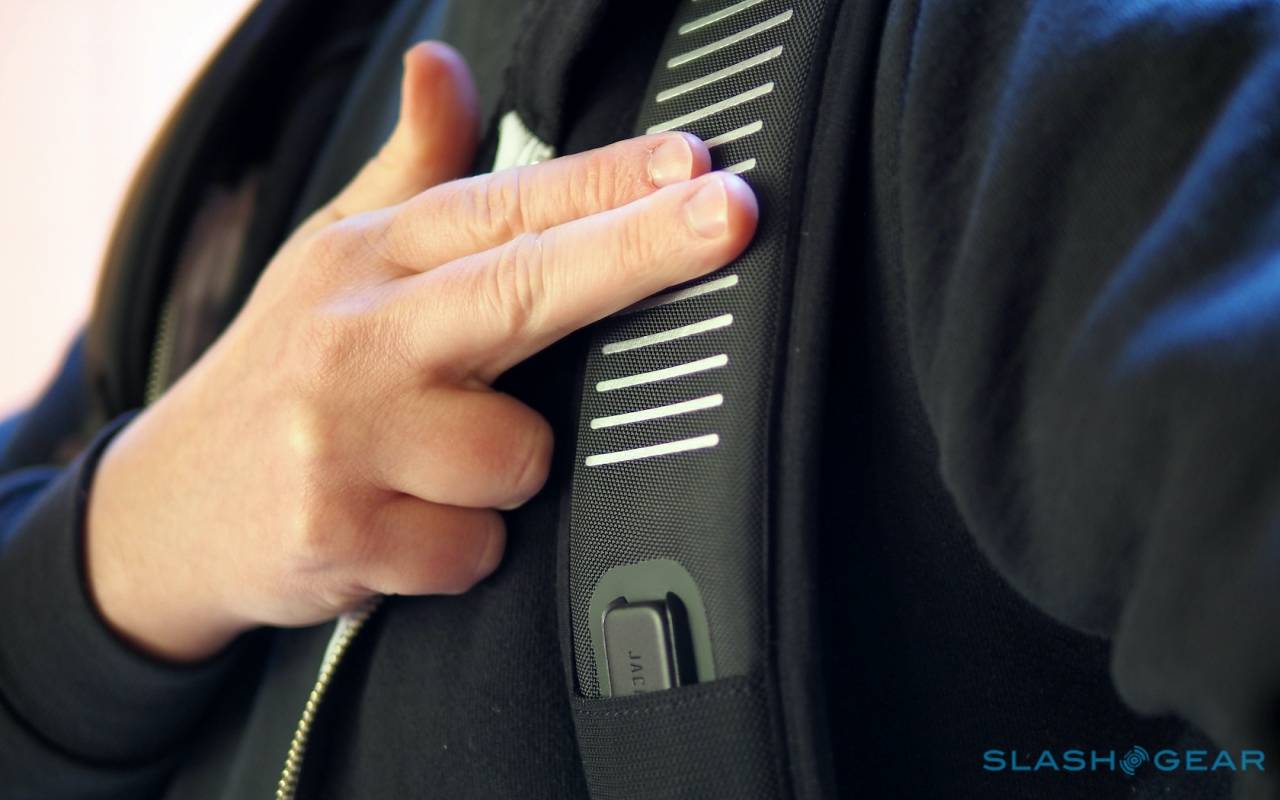 Instead, the Konnect-i Backpack feels a little limited by virtue of Jacquard’s set of commands. If you’re in the habit of wearing a smartwatch, then everything you can do with Samsonite’s bag is just as accessible on your wrist.

The upside to Jacquard is battery life. The tag – charging via microUSB – lasts 10-14 days, depending on how much you use it. Considering most smartwatches last for a couple of days at best, that’s a long time away from a charger. You can simultaneously connect multiple tags to the same smartphone, too, if you’re going all-in with multiple items. 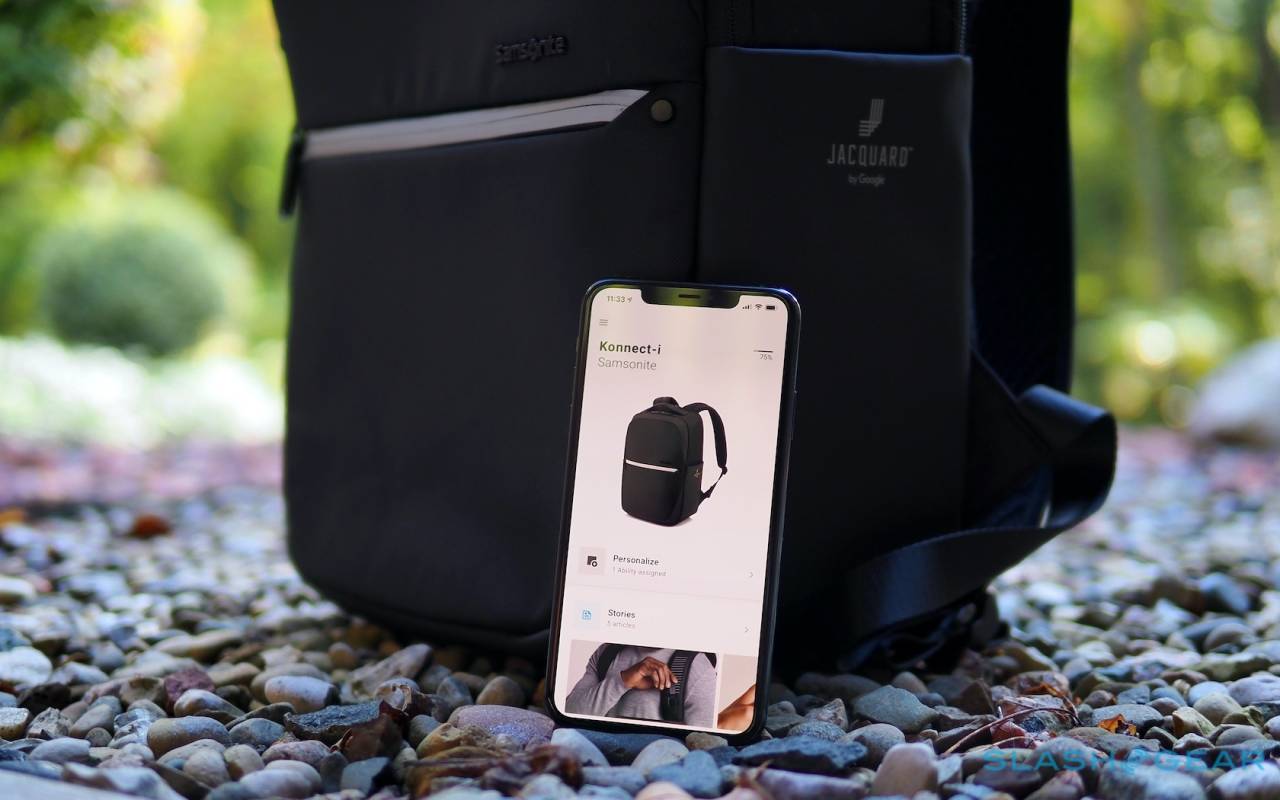 As with previous Jacquard products, my lingering feeling is that it’s clever but mainly constrained by software. I love the idea of smarter clothes and accessories, softening our interactions with tech compared to phones and tablets. Swiping the Konnect-i Backpack strap is a lot less distracting than pulling out my phone, changing track, and then inevitably getting sucked into some doom-scrolling on Twitter. A little extra app flexibility would be all it takes to nudge Jacquard out of the “cool experiment” category and into something much more broadly useful.