SAFFiR, The Navy’s firefighting Robot is all fired up

Automation is the name of the game, and with machines taking over people’s jobs left, right, and centre, many are getting worried about one day receiving that dreaded pink slip. According to some recent research conducted for Forbes Magazine, Robots will take 45% of all jobs in the not too distant future. Well, one job most people won’t be too sorry to let go to a machine is fighting fires aboard ships. Considered incredibly dangerous, this job will soon become a lot safer for humans, courtesy of the US Navy’s very own SAFFiR.

What sounds like a diamond in the rough, actually stands for Shipboard Autonomous Firefighting Robot. What the Robot and the rock with a similar-sounding name have in common, is that they are both very tough on the outside.

Built to withstand the rigours of fighting fires on all kinds of ships, the Robot stands 5 foot 10 Inches tall, and is equipped with multi-modal sensor technology for advanced navigation, and a sensor suite that includes a camera, gas sensor, and stereo IR camera to enable it to see through smoke. The internal battery can keep it working for over 30 minutes at a time. It is also outfitted with propelled extinguishing agent technology (PEAT) grenades. On top of that, according to Naval Engineers, it will be able to balance in rough seas, enabling it to kill flames while onboard a ship. 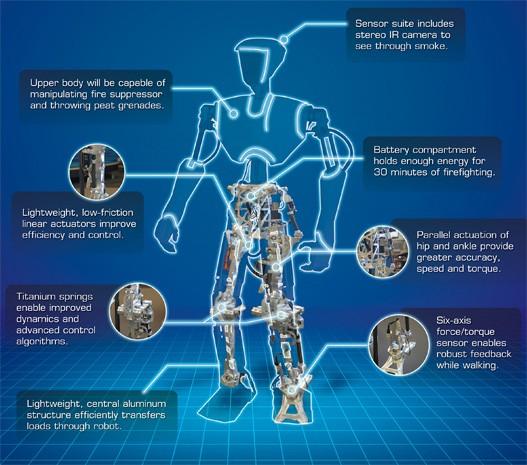 Hmm, a mostly autonomous Robot outfitted with grenades and capable of moving about a swaying vessel at sea, and having the ability to navigate tight, complex spaces… Now that is a concept even SkyNet would be proud of.