Russian government-linked internet troll accounts aimed to use Pokemon GO to stir several political bees nests over the past year. Using the then mega-popular game to lure users to participate, Russian-linked operatives attempted to draw foot traffic to physical locations where events involving police brutality had occurred. Operatives promised that once Pokemon gamers had arrived at these locations, they were to snap a photo and send it in to win prizes.

In the contest, as reposted by CNN, operatives send users to The Guardian where total police murders can be found, state by state. Users were encouraged to go to locations on the map, win Pokemon battles at nearby Pokemon Gyms, and place their inappropriately-named Pokemon in said gyms for all to see.

In the image of the “contest” we have here, these Russia-linked operatives used the name Eric Garner for the Pokemon they’re using as an example. Garner was murdered by a police offer by the name of Daniel Pantaleo. The police officer held Pantaleo in a chokehold until he died, interrupted only by Garner’s plea for mercy: “I can’t breath”.

It’s unclear what Russian operatives hoped to gain by creating a Pokemon GO contest to win Amazon gift cards in areas home to police brutality. The campaign was part of a larger effort to stir trouble in the USA during (and presumably after) the 2016 presidential election. According to CNN, “one Russian-linked campaign posing as part of the Black Lives Matter movement used Facebook, Instagram, Twitter, YouTube, Tumblr and Pokémon Go and even contacted some reporters in an effort to exploit racial tensions and sow discord among Americans.” 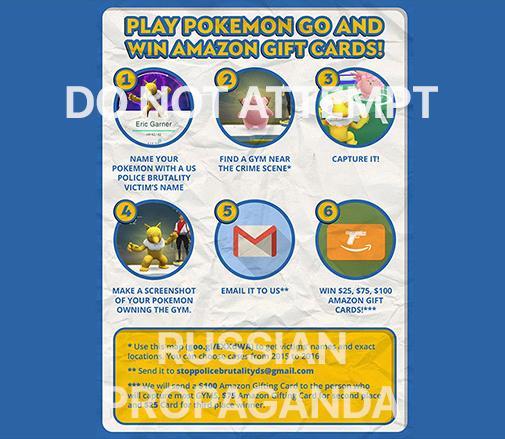 Niantic provided a comment on the situation this week, saying “It’s clear from the images shared with us by CNN that our game assets were appropriated and misused in promotions by third parties without our permission.” Niantic also mentioned that no malicious entity ever used Pokemon GO itself to spread any messages of discord, as the game has no means of communication between players.

It’s likely this campaign was meant to do several things, if I might be so bold: it sowed the seeds for potential violence. It belittled the major events that took place at the locations the contest marked. It posed as a resistance group against police brutality but did so in a way that made said resistance look petty and absurd.

If this campaign was truly run by Russian operatives as CNN reports, it’s clear their overarching goal is to make citizens of the United States look like a bunch of idiots.

The same Tumblr page that promoted the (very obviously unofficial) Pokemon GO contest now provides pro-Palestinian propaganda to the public. This group was (and is, apparently) related to Russia’s IRA (Internet Research Agency), a troll group responsible for massive amounts of disinformation and tension-spurring across the internet for a number of years – culminating in a concentrated campaign aimed at the 2016 presidential election season.