Rosetta’s lander may be fading, but its photos are incredible

Philae may be lost somewhere on Comet 67P, rapidly running out of power, and yet to tie itself down safely, but that’s not stopping the Rosetta mission from sending back some incredible photos of the hurtling space rock. Images captured both by the lander itself and the Rosetta rocket that delivered it to Comet 67P/Churyumov–Gerasimenko – and is currently orbiting it as a radio lifeline back to Earth – show the incredible surface both from close orbit and from Philae’s unexpectedly awkward current resting place, though how much longer the probe will be able to send back footage is unclear.

That’s because, while Philae originally touched down in the right place, it then proceeded to bounce back up and drift across the surface of the comet for almost two hours.

Its final resting place – after one last bumble – proved to be far less conducive to the original plan than hoped. The European Space Agency initially hoped for more than half of the lander’s day to be spent basking in sunshine and thus recharging its secondary batteries; instead, it’s in a spot where it gets just a fraction of that light. 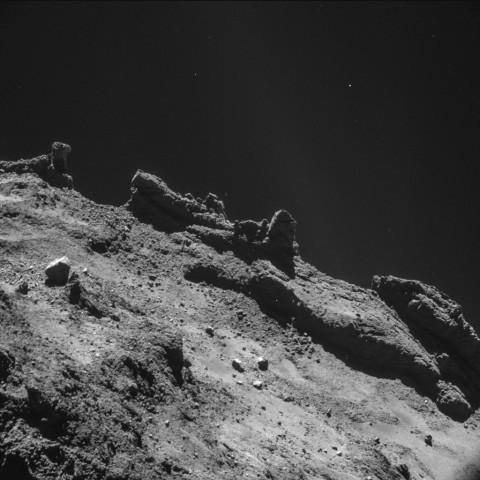 With the primary batteries, only intended to keep the rover going at the very beginning, almost drained, it’s unclear whether Philae will go ahead as intended.

Still, even the shots we have so far are breathtaking, though they’ve taken a little post-processing to make the detail visible. 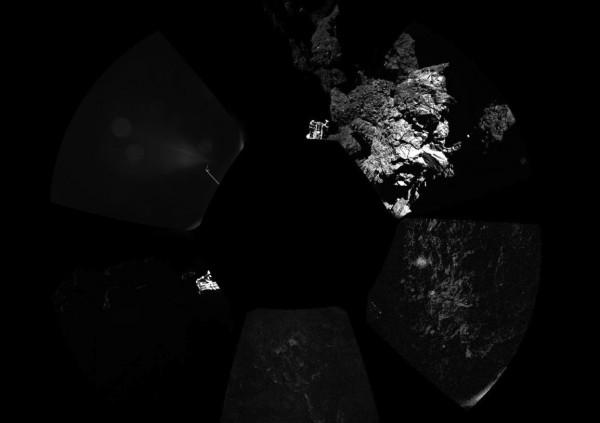 “In reality, the comet is extremely dark – blacker than coal,” the ESA points out. “The images, taken in black-and-white, are grey-scaled according to the relative brightness of the features observed, which depends on local illumination conditions, surface characteristics and composition of the given area.”

Panoramic shots from the surface, meanwhile, are being pored over as the ESA team attempts to figure out exactly where Philae has come to rest. Several possibilities for moving the lander are being explored, including effectively pogoing it out of the shadows by repurposing the drills or harpoon system.