Roku HD, XD and XDS streamers get refreshed: from $59.99, wireless across the board

Roku has updated its line-up of on-demand media streamers, with the $59.99 Roku HD, $79.99 Roku XD with WiFi-N and 1080p, and the flagship $99.99 Roku XDS with dual-band wireless.  Delivering Netflix, Amazon Video On Demand and other video content – together with audio from Pandora, MP3tunes, MOG and RadioTime, and pictures from Flickr and Facebook – the XD and XDS versions will also get Instant Replay for skipping back through video without waiting for it to rebuffer.

Each hit of the Instant Replay button takes you back seven seconds, just as you might be used to from a DVD or DVR.  The entry-level Roku HD supports 720p HD, composite and HDMI outputs, has integrated wireless and wired ethernet, and measures under an inch tall and under five inches wide.  Meanwhile the Roku XD upgrades to 1080p over HDMI and 802.11n.

Finally, the Roku XDS makes that WiFi connection dual-band, for more stable connectivity with compatible routers, and it has an optical audio output, component video, and a USB port that – as of November – will allow you to plug in a hard-drive and play locally stored content as well.  All three new models are available now. 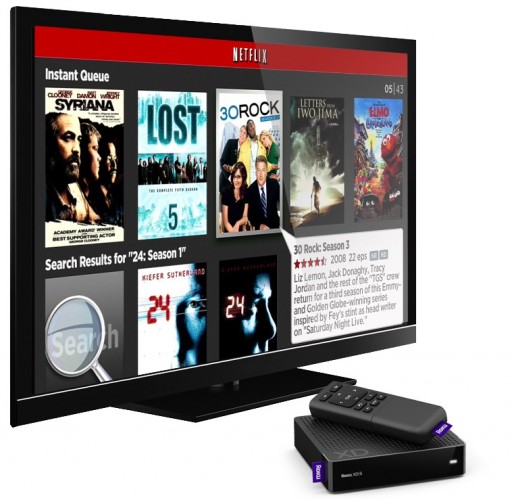 Saratoga, Calif. – September 23, 2010 – Roku, Inc., maker of the best-selling and award-winning Roku streaming player, introduced today its new product lineup, featuring improved performance and the lowest prices in the industry. With up to 1080p HD streaming support and Instant Replay, the new players are shipping immediately at prices starting from just $59.99. All models feature high-definition playback as well as support for older, standard definition TVs.
There are three new Roku models: the entry-level Roku HD at $59.99; the Roku XD with Wireless-N and 1080p, and the top-of-the-line Roku XDS, which adds dual-band wireless technology and extensive connectivity options for home entertainment systems.

All Roku players will continue to deliver the largest collection of streaming entertainment available for the TV, including over 100,000 movies and TV shows from Netflix (NASDAQ: NFLX) and Amazon (NASDAQ: AMZN) Video On Demand; live and on-demand baseball from MLB.TV; music from Pandora, MP3tunes, MOG, and RadioTime; photo and video sharing from Flickr and Facebook; plus news and entertainment from thousands of sources around the world.

“We’re committed to delivering the best entertainment experience at the lowest price in the industry,” said Anthony Wood, founder and CEO of Roku, Inc. “Customers can now buy an HD-capable Roku player with wireless for 40% less than the price of our original $100 Roku HD player. Or, think of it this way: for around the price of two Blu-ray Discs, a Roku player brings you access to limitless instant streaming entertainment choices available today and in the future. It’s perfect for anyone who wants the most choice and control over their entertainment.”

The new $59.99 Roku HD streams video in high-definition at up to 720p, and features built-in wireless and Ethernet for easy broadband connectivity anywhere in the home. The small, sleek Roku HD is only 1 inch tall and less than 5 inches wide, so it fits anywhere and is tiny enough to take on a trip. A composite A/V cable is included so that it can connect to virtually any TV, including standard definition models. An HDMI port enables HD playback on HDTVs.

The new Roku XD ($79.99) and XDS ($99.99) models deliver the next level of streaming performance, with 1080p HD support (delivered over HDMI) and extended-range Wireless-N. In addition, the XDS model features dual-band Wireless-N technology, component video output, optical audio output, and a USB port. Over USB, customers will be able to play stored music, photos, and up to 1080p video using a USB playback channel, available as a free upgrade to XDS owners (expected to be available in November 2010).

Both XD and XDS models also feature an industry first in streaming devices for the TV: an innovative Instant Replay button on the remote, enabling the viewer to skip back in 7-second increments without having to wait for a rebuffering delay. It’s a convenience that until now has been limited to DVRs and other hard-drive based devices.

First introduced in May 2008, the Roku player provides an easy, affordable, and reliable way for hundreds of thousands of Netflix customers to watch movies and TV shows instantly on their TV. Since the launch of the Roku Channel Store last fall, all Roku customers now have access to over 85 channels from 50 unique content services, with more added all the time.

About Roku, Inc.
The market leader in streaming entertainment devices for the TV, Roku has always believed that anything you want to watch, listen to, and enjoy should simply be there on your TV, whenever you want it. Roku streaming players are renowned for their simplicity, variety of entertainment choices, and exceptional value. Roku is privately held and based in Saratoga, Calif.