Coffee is serious business but, despite plenty of companies trying to bring traditional brewing methods into the 21st century, one has lagged behind: the French Press. The Rite Press aims to change that, though this is no internet-connected, Tweeting and HomeKit-enabled gadget for geekery’s own sake. Instead, it’s a thoughtful and effective upgrade to one of my favorite ways to make a cup of coffee.

French Press – also know as a cafetière, coffee press, or press pot – is one of the older methods of brewing, dating back to 1929. It’s also fairly straightforward. Hot water and coffee are mixed together in what’s usually a glass or metal vessel, left to brew, and then the coffee grounds are separated from the drink by pressing a filter of fine mesh down with a plunger. 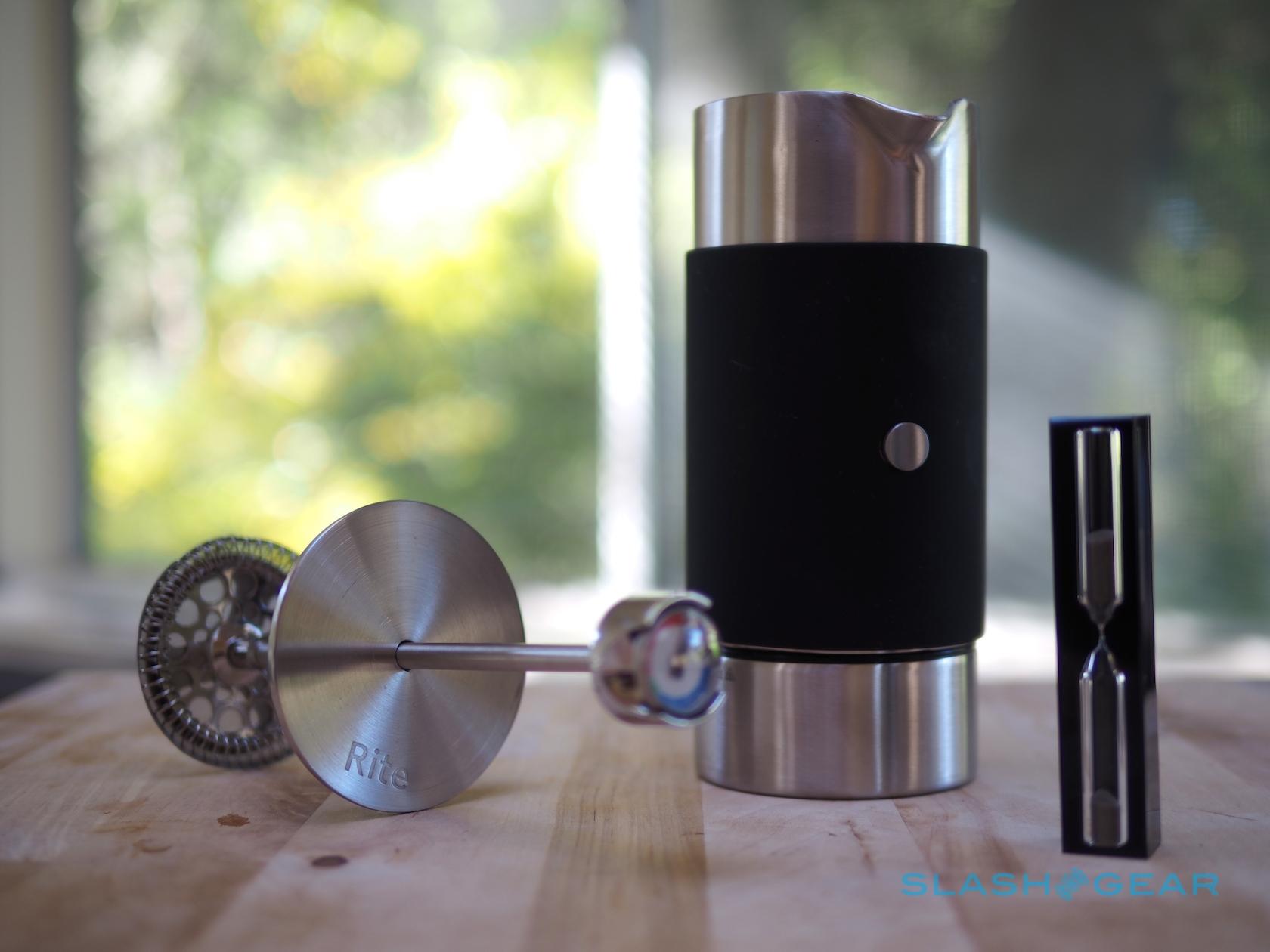 It’s simple, though there are a few issues which can turn caffeine addicts off. Most commonly complained about is the clean-up process: when you’ve finished your coffee you’re left with a messy sludge at the bottom of the pot, which needs to be disposed of. The mesh needs to be cleaned, too, and the whole brewing vessel itself unless you want stale coffee oil tastes in your next cup.

The other big issue is heat. Most French Press use glass for the pot itself, which is great for watching the grounds swirl in the water but not so effective at keeping in its heat. Considering a typical brew lasts for 3-4 minutes, that’s a lot of time for your drink to start going cold. 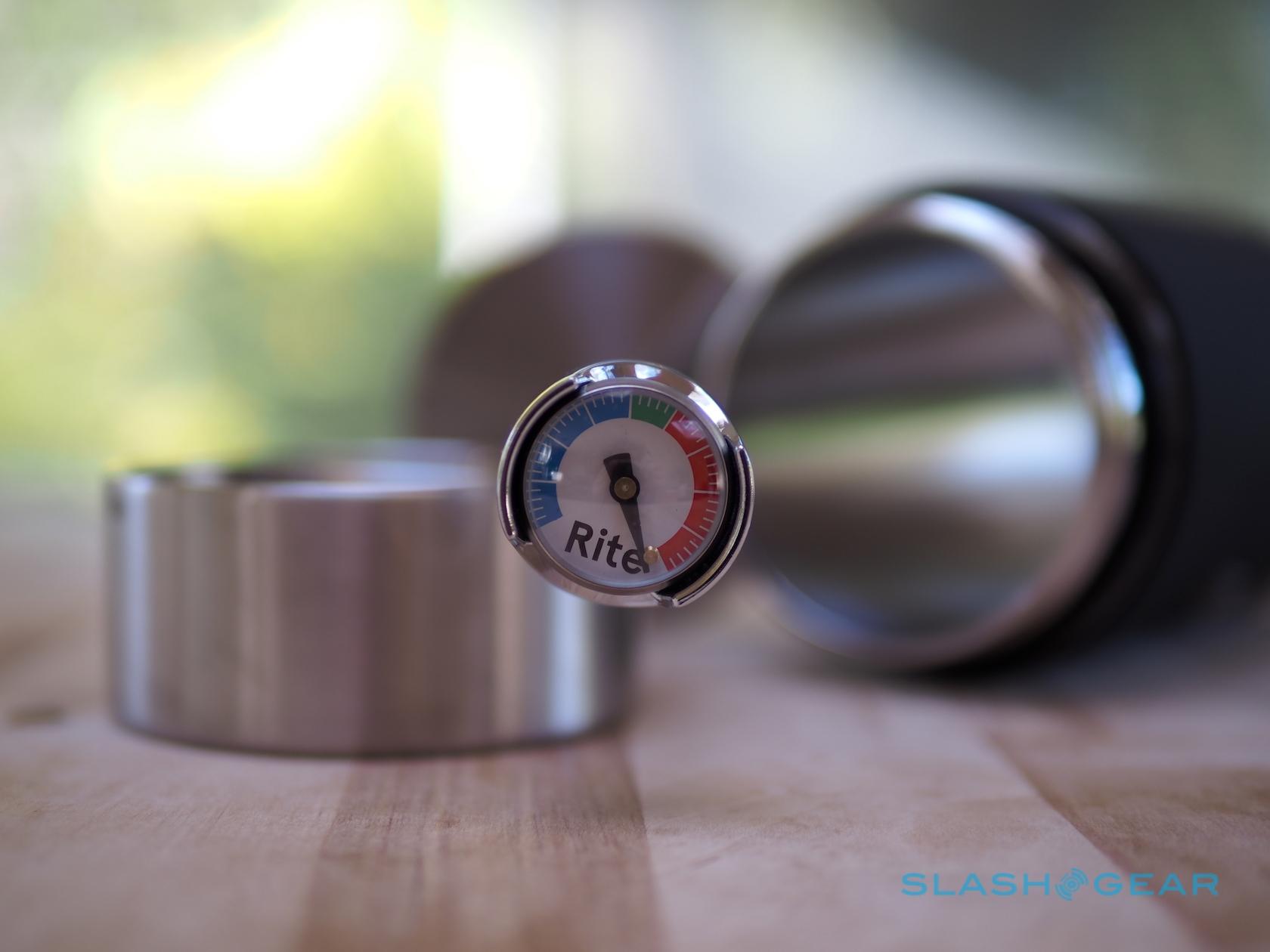 Rite Press promises to address both those factors, and throw in some extra convenience along the way. Rather than glass it’s double-walled stainless steel – available in one liter or half-liter capacities – to keep more heat inside. The bottom unscrews for easier clean-up. And there’s a timer and a thermometer included to settle questions about how long you should brew for, and whether the water is hot enough.

The one liter Rite Press has a handle, while the half-liter model – which I have to review – is wrapped in a rubber grip like a large travel mug. It feels sturdy and unlikely to break; the stem of the filter plunger is thick and you’d need to seriously go out of your way in order to bend it. The thermometer slots into the top of the plunger handle for safe-keeping, while the timer sticks magnetically to the front. 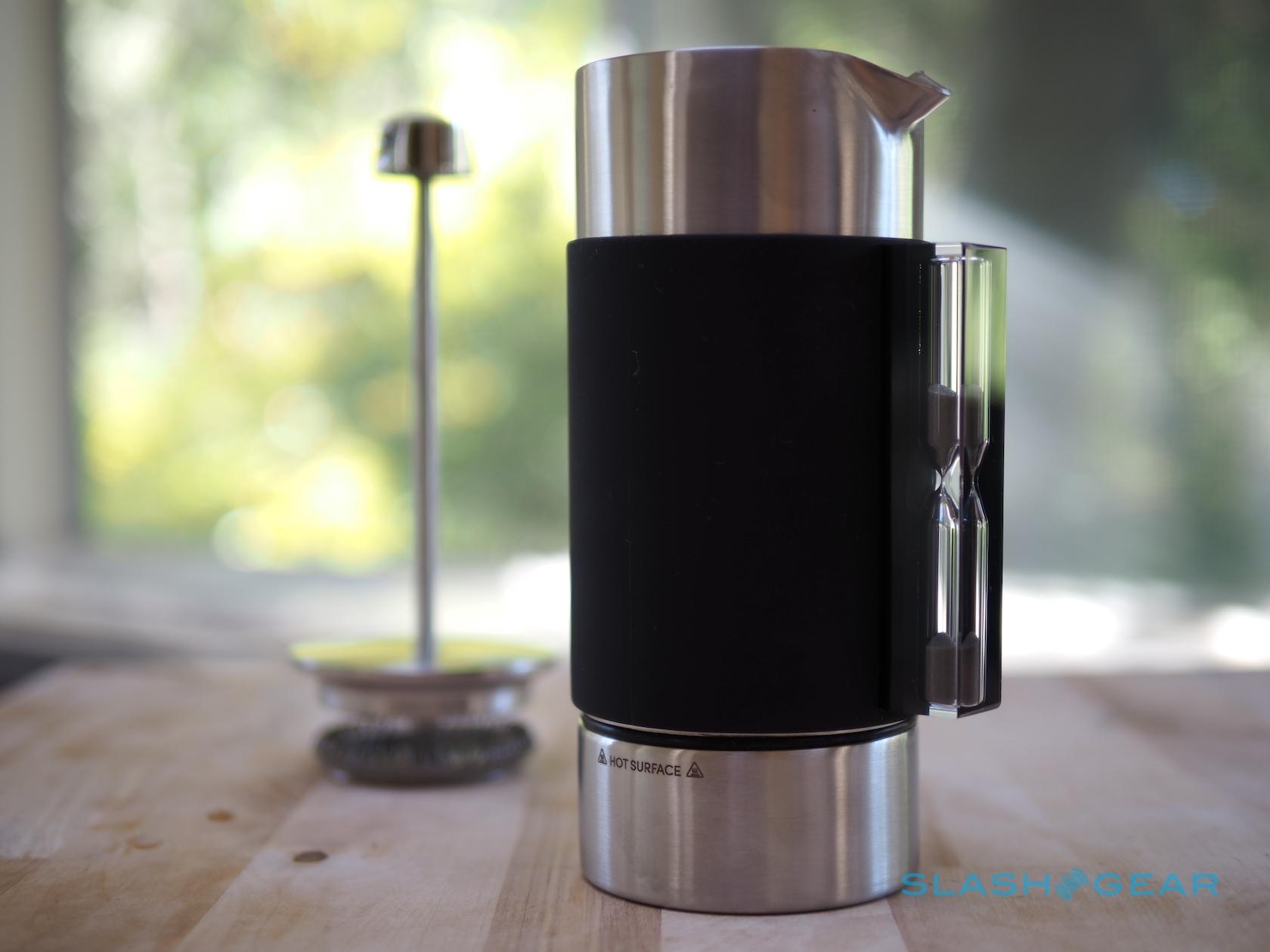 Brewing is easy. After making sure the base is screwed on tightly – there’s a silicone rubber seal in there too – you add course-ground coffee. After pulling out the thermometer, you test the temperature of the water: just off boiling, or 200 degrees Fahrenheit, is what you’re aiming for, though Rite Press eschews actual numbers on its scale and instead color-codes it blue for too cool, red for too hot, and green for just right.

Add the water to the coffee, set the lid on top, and then twist over the timer. It measures out 3 minutes and 30 seconds, though since it’s old-school sand in there you’ll need to keep an eye on it as there’s no beeping or buzzing. I asked HomePod to give me a backup timer, just in case. When the time is up, you carefully press down on the plunger, separating coffee grounds from coffee, and then get to drinking. 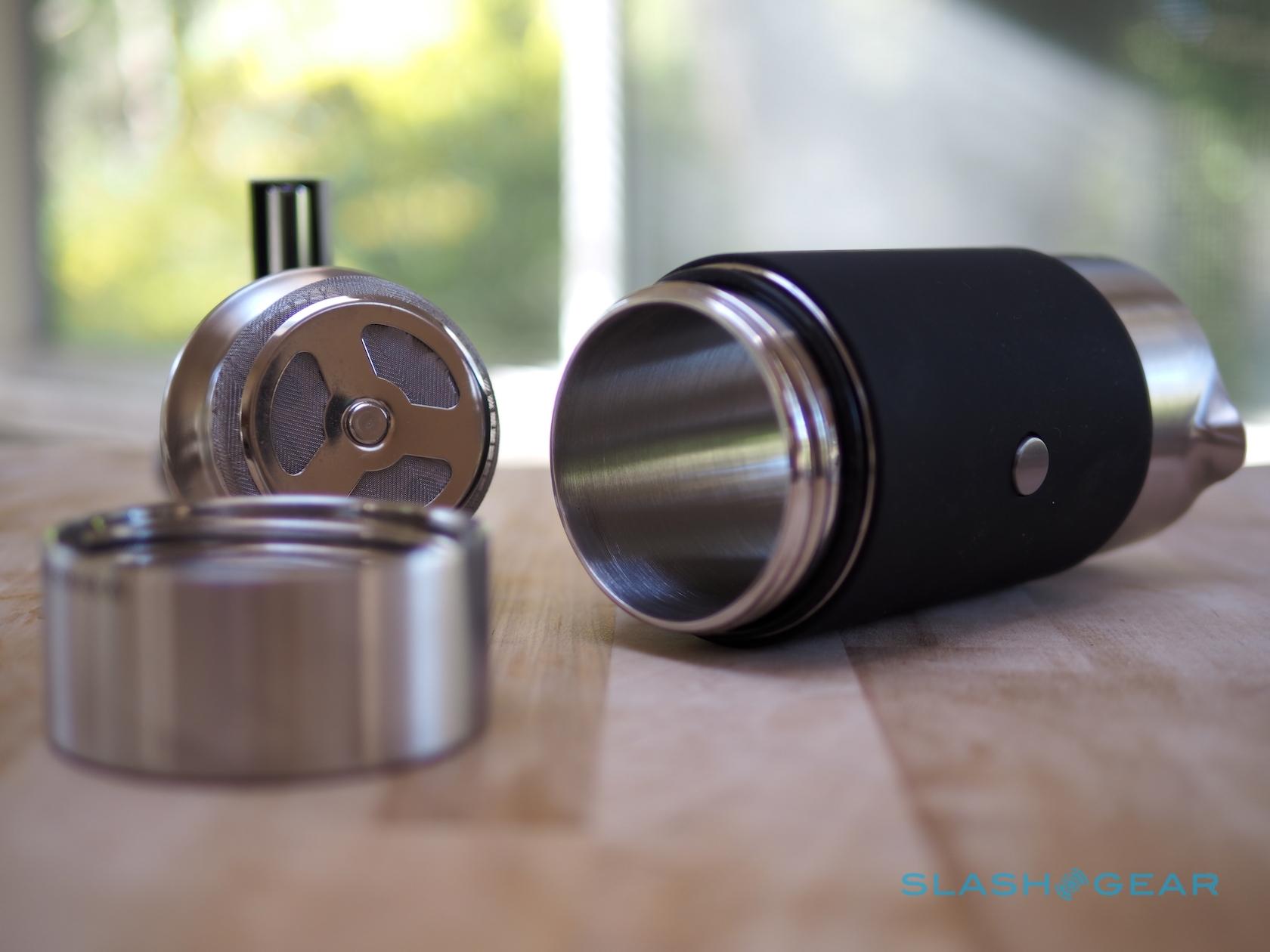 If you’ve had French Press coffee before then you’ll know what to expect. There’s a fairly distinctive taste to it, not least because since there’s no paper filter the oils from the coffee are retained in the liquid. Some of the coffee bean fines can remain suspended after slipping through the mesh filter, too, which gives it a body that other brewing methods can lack.

For the best cup, you’ll be wanting to buy freshly-roasted beans, and grind them just before you make a pot of coffee. That’s table-stakes for any type of coffee preparation. What I was curious about was whether the Rite Press’ bells & whistles actually added to what I was drinking.

First off, the insulation. I boiled some water and added it to the pot, taking the temperature with a digital thermometer that read 201 degrees Fahrenheit. It’s worth noting that Rite Press’ analog thermometer showed the needle just in the green zone. The company tells me you can recalibrate it by placing the probe end in briskly boiling water and then twisting the stem to adjust where the needle is pointing; or, you can simply remember where is correct on your particular unit. 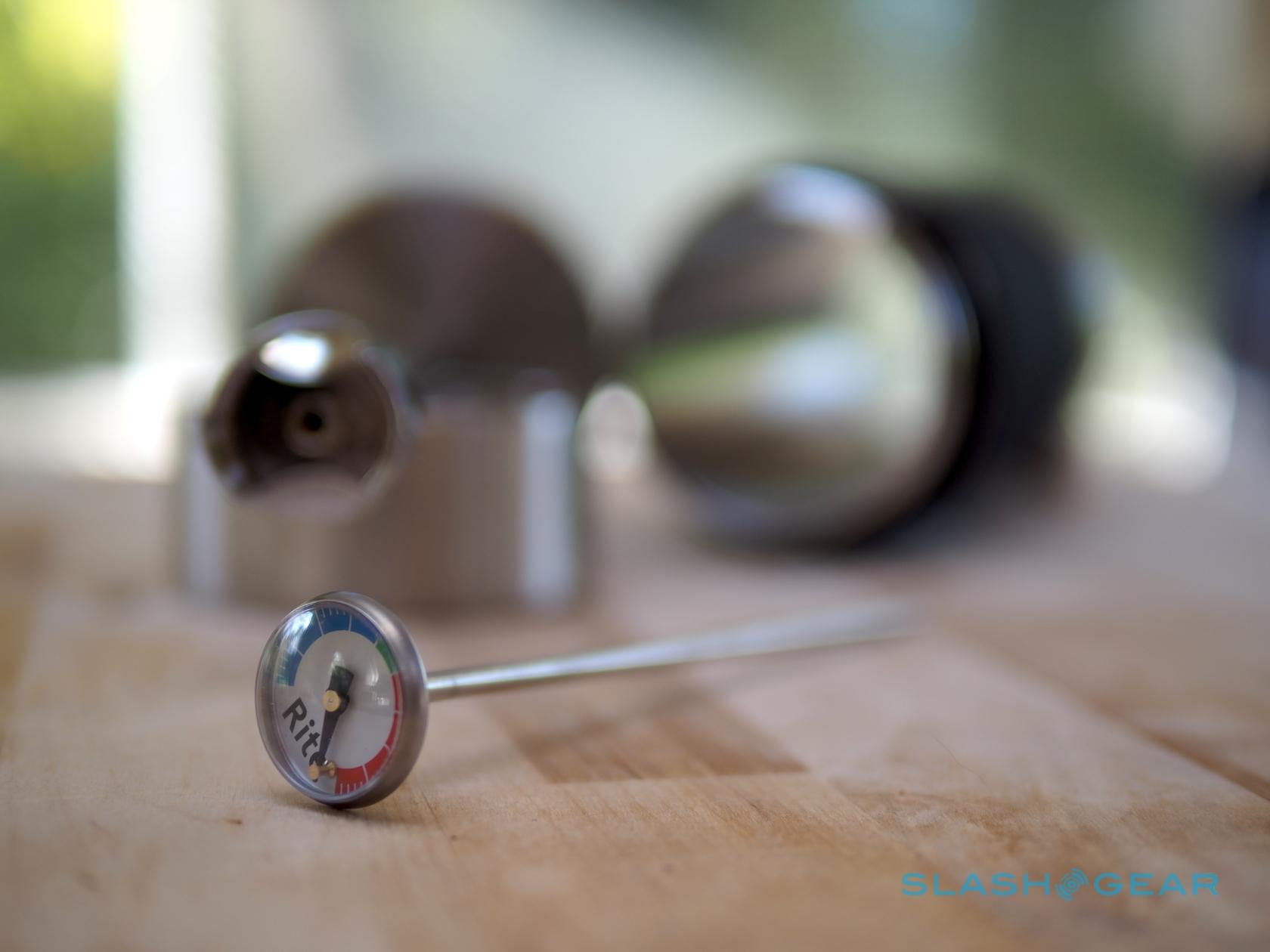 After 45 minutes, with the lid on and the plunger submerged, the water had cooled to 161 degrees. After an hour, it was down to 151 degrees. That was still eminently drinkable: indeed, when I measured the temperature of a brewed coffee from a super-automatic machine, that came out at 153 degrees. It’s also worth noting that I put the boiling water into a cold pot. If I were actually making coffee, I’d pre-heat the Rite Press by sloshing some boiling water around in it first, before I added the coffee, which would further reduce the temperature loss over time.

The other big question I had was just how clean the tidy-up process would actually be. Turns out, it’s surprisingly straightforward. I unscrewed the base and dumped out the wet coffee grounds from there into the trash, then rinsed through the open tube. It’s definitely easier than a traditional French Press, though unscrewing the filter assembly – the mesh being held between two metal plates – is still a little fiddly. Notably, everything but the thermometer and the timer are dishwasher safe, too.

There’s a lot to like about the Rite Press. Although part of me wishes they’d gone for a digital thermometer and a timer that could make noise, there’s no denying that the battery-free simplicity of the analog instruments has an off-grid charm of its own. My only real disappointment is that, while redesigning the base of the French Press for easy cleaning, the company didn’t also rework the filter assembly: a simple-to-remove clip, perhaps, or some other way to separate out the layers for easier cleaning. 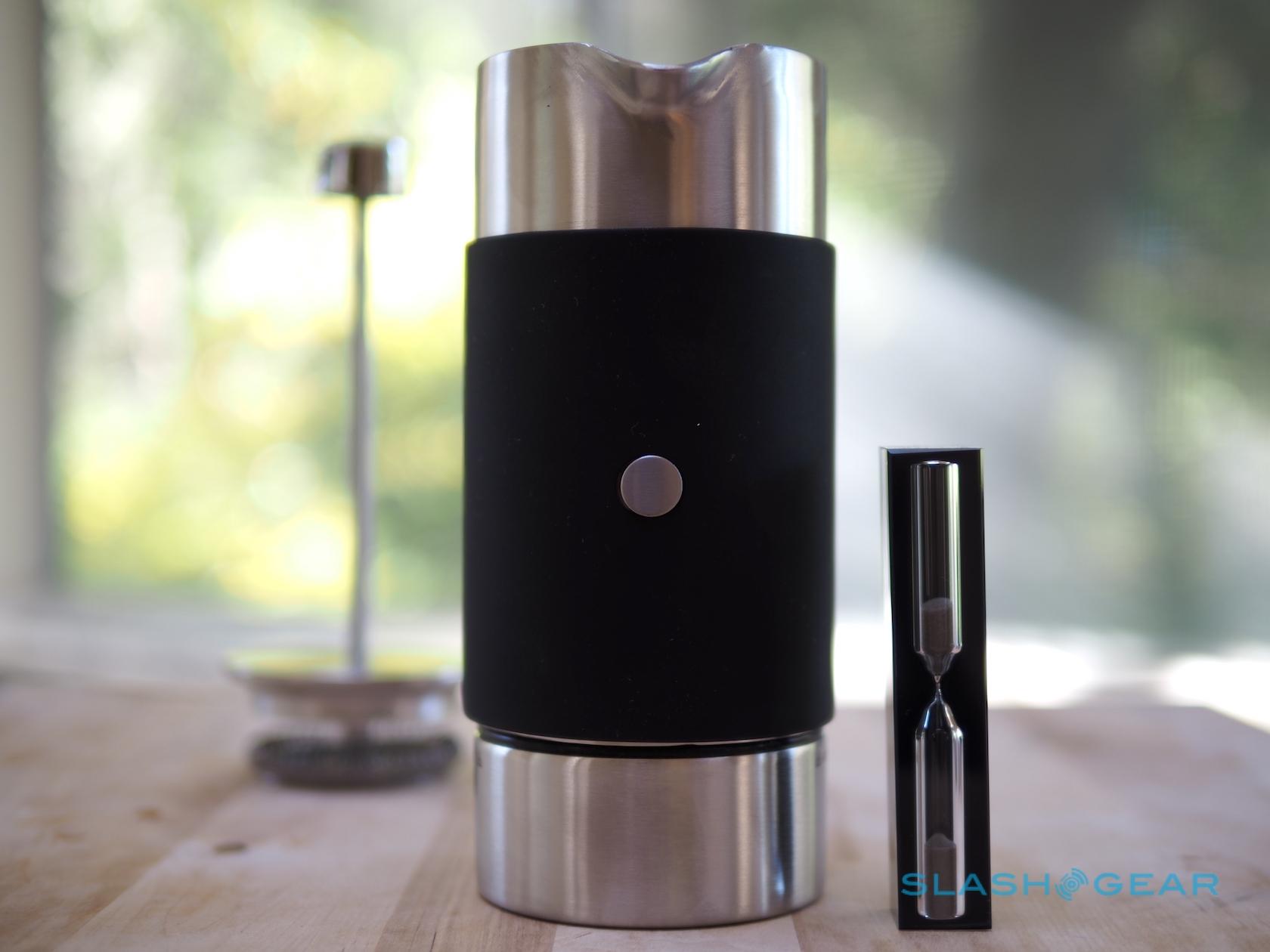 Nonetheless, with its Kickstarter at over $500k – well in excess of the $20k the Rite Press team was hoping for – and an early-bird price of $30 for the silver half-liter model or $35 for the silver one liter, it’s more than competitive with brand name French Press options. OXO models, for instance, range from $20-40, though without the insulated pot, removable base, or all-metal construction. After the Kickstarter ends on March 9th, pricing will apparently rise considerably: by as much as 73-percent, model depending, in fact, which seems excessive. Back the campaign now, meanwhile, and you’ll need to wait until March for shipping to begin, but I suspect that’s worth it to take advantage of the pre-launch price.