Ring Car Cam leaks: This could be Amazon’s Alexa dash-cam

Details and what appears to be an image of Ring’s upcoming Car Cam have leaked, with the connected dash cam expected to add security both when the vehicle is parked and while it’s on the move. The newest addition to Ring’s line-up was actually announced in September 2020 as part of Amazon’s big device launch, though at the time no pictures of the Car Cam hardware itself were shared.

Still, Ring’s description painted a fairly comprehensive picture of what it was intended to do. As well as tracking bumps and attempted break-ins, and notifying owners via the Ring smartphone app, it can also be used to record journeys and summon emergency services in the case of an accident being detected.

If you’re being pulled over by the police, meanwhile, saying “Alexa, I’m being pulled over” will automatically begin video and audio recording. At the same time as that’s being uploaded to the cloud, the system will send a notification to pre-selected family members to let them know the stop has taken place. Ring said there would be a physical privacy shutter, too, and a choice of WiFi or LTE connectivity. The whole thing would be $199.99, though cellular plans would be on top of that.

Since then, we’ve not heard anything more about the new dash camera. A leak on The Tape Drive, though, has revealed what it could look like, and it’s certainly an unusual design.

The camera assembly looks to be mounted on some sort of bracket, either to be positioned above the dashboard or potentially hung from above the rearview mirror. There’s presumably a fish-eye camera on both sides – only visible from one side in the render – to capture footage both inside and outside of the car.

As for functionality, ZatzNotFunny spotted a seemingly prematurely-published Ring Car Cam information document on the company’s support site. It reconfirms some of the details which Ring told us late last year, but also adds a few extra tidbits. 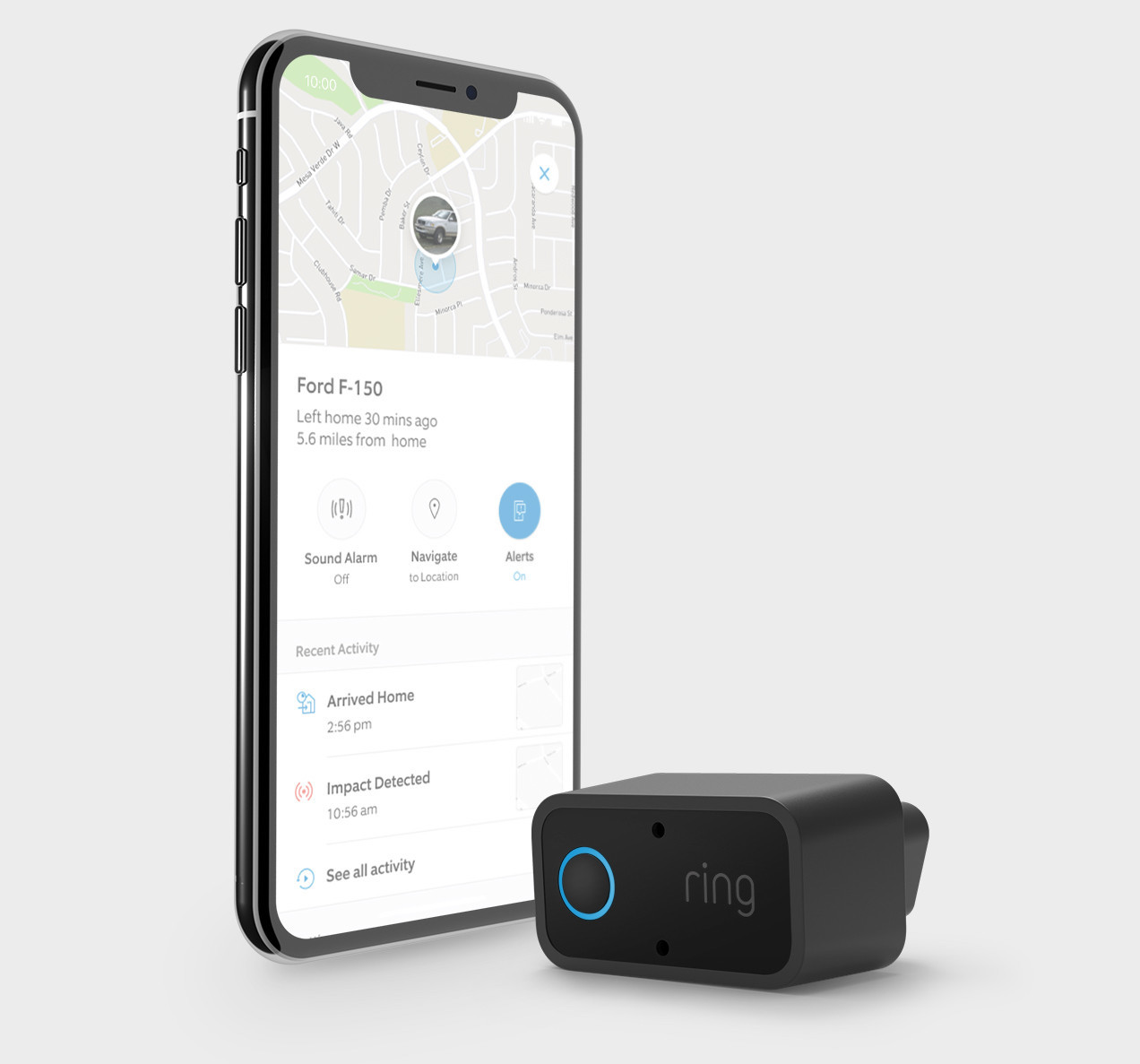 For example, the camera will connect via the vehicle’s data port, not just hook up to a USB or 12V outlet for power. “Ring Car Cam easily installs directly to the OBD-II port in your vehicle, located behind your steering wheel in most cars,” Ring explains. “It securely attaches to the windshield and dashboard of the car, and the cable can be neatly tucked away and out of sight.”

It’s unclear what extra data Ring might be gathering by using that approach. The OBD-II port typically grants access to various driving metrics, and though originally intended as a way for vehicle technicians to diagnose faults and issues in increasingly computerized models, has also gained traction as a way for third-party devices to tap that same stream of information. Amazon had also announced Ring Car Alarm, a cellularly-connected dongle that plugs into the ODB-II port.

The Ring Car Cam itself won’t require a subscription, though you won’t get all of the features in that case. “You can access video stored locally on the device via the Ring app when the car is within range of wifi,” the company explains. “With an optional Ring connectivity plan, you can access video from anywhere via LTE as well as advanced features like Emergency Crash Assist.”

The connectivity plan for Ring Car Cam will also unlock features like real-time tracking, to help locate a stolen vehicle.

What remains to be seen is how Ring Car Cam will fit into Ring’s existing sharing policies with police departments. The Amazon-owned company has found itself mired in controversy in recent years, after inking deals with law enforcement that saw many requests for footage from connected security cameras and video doorbells. Ring had been accused of fueling privacy infringement and supporting racial profiling.

Earlier this month, the company announced a new policy around sharing with public safety and law enforcement agencies. Moving forward, such agencies will ahem to request information or video from communities through a publicly-viewable category on Ring’s Neighbors app. This new section, “Request for Assistance,” will allow communities to see just what sort of data is being shared, Ring says.