Ricoh has a new 360-degree camera, the Theta Z1, the new flagship of its range and promising significant improvements in image quality and usability. It also commands a premium price: $999, when the Theta Z1 goes on sale in a couple of months time. That may be too rich for consumers, which is a shame given the hardware on offer.

A bigger brother to the Theta V

While at first glance the Theta Z1 is clearly part of the same 360-degree camera family as the Theta V, you feel the differences as soon as you pick it up. Unlike the plastic body of the cheaper camera, the Z1 is made of magnesium. It’s heavier, and combined with the increase in thickness of the camera the whole thing feels sturdier and more substantial. 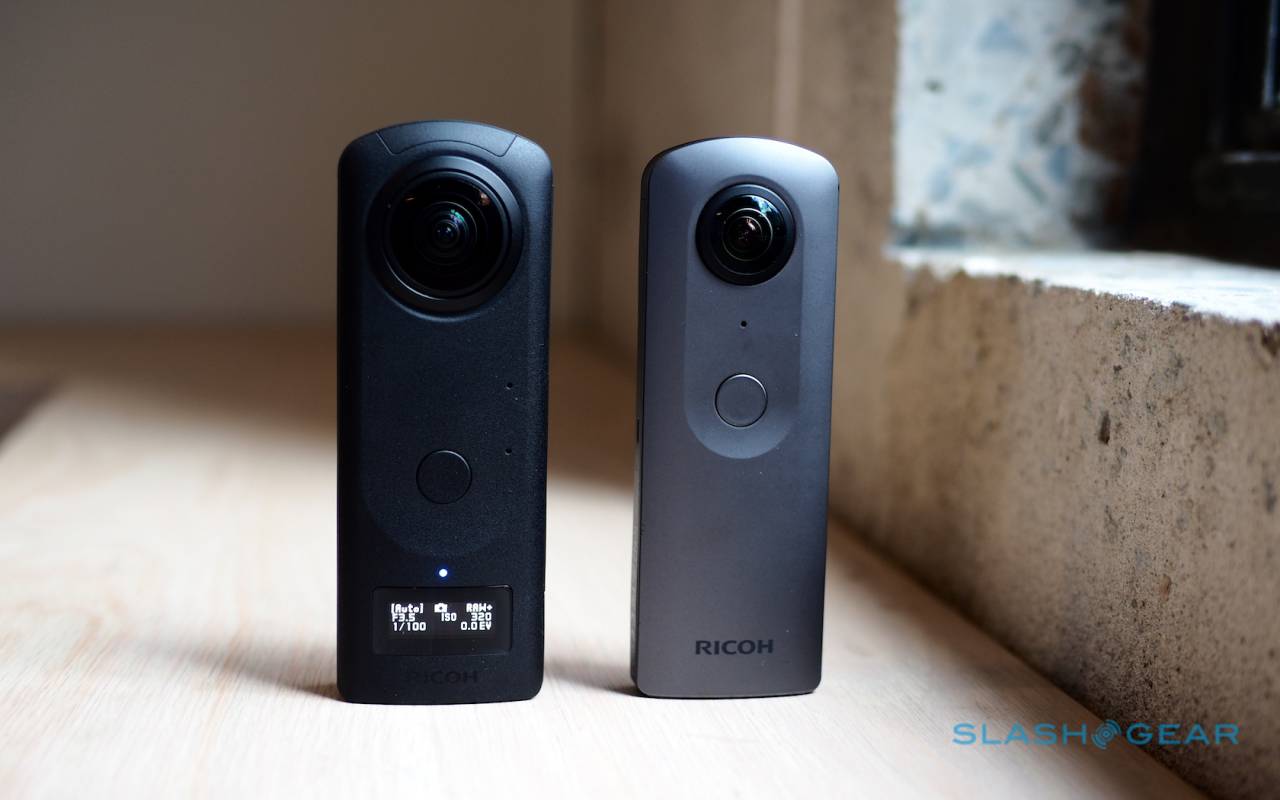 That’s not just a perception, either. Ricoh has reinforced key parts of the Theta Z1, on the assumption that it might get some fairly rough treatment out in the wild. The tripod screw is metal now, for instance, a useful precaution whether you’re mounting the camera on a tripod or a car or bike bracket. It’s alongside a USB-C port for charging and data, though Ricoh also provides Bluetooth and WiFi.

The other obvious improvement is the display. With the Theta V, you need to either decode a flashing LED or dig into the app to see the current settings, battery status, and available storage. The Theta Z1 adds a compact 0.93-inch OLED screen on the front, which can show which mode you’re in, what the camera or video settings are, and how much battery and storage you have left. 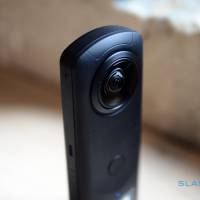 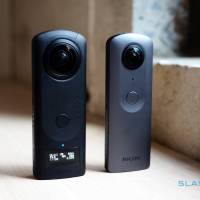 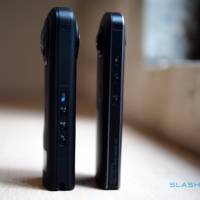 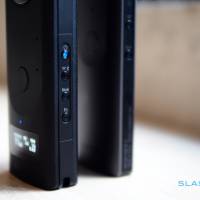 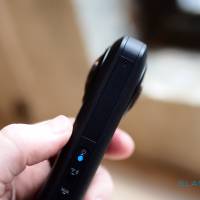 There’s also a new button, a function key on the side alongside the wireless and power controls, which steps through each mode and setting. In short, you can get a lot more done with the Theta Z1 without resorting to the app, which should make for a swifter overall experience.

Most consumer 360-degree cameras – Ricoh’s own Theta V included – use a 1/2.3-inch sensor. Or, more accurately, two of them: one for each lens. The Theta Z1 steps up to a pair of 1-inch sensors, each of which are almost four times as large as the cheaper camera.

The result is a combined resolution of 7K, or approximately 23-megapixels, compared to the 5.2K of the Theta V. Just as important, there’s less noise and more detail, particularly in low-light conditions. Video recoding stays at 4K 3840 x 1920 and 30fps, but footage benefits from the same improvement in dynamics from the larger sensor, too. 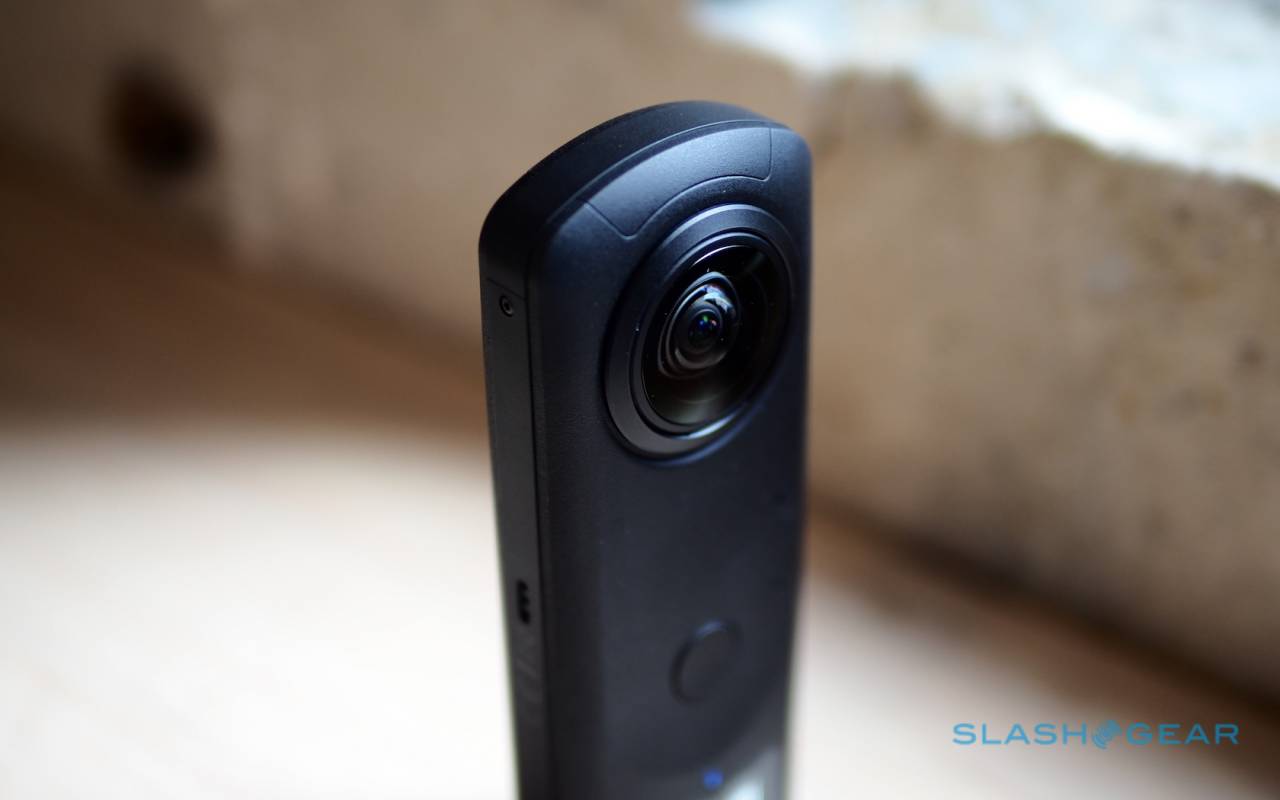 It’s not only the pair of bigger sensors that differentiates the Theta Z1 from other cameras. Rather than a fixed aperture, the new 360-degree shooter supports three different apertures: f/2.1, f/3.5, and f/5.6. Actually squeezing that mechanism – or, more accurately, both mechanisms since each sensor requires one – into the body of the camera was a challenge, Ricoh orienting them vertically along the edges and making use of various prisms to redirect the light.

It was worth it, though, Ricoh claims, because it helps the Theta Z1 avoid some of the typical 360-degree camera flaws. Fringing, flares, and ghost elements are all fairly commonplace in the segment, as camera-makers face the challenge of capturing a single scene with potentially huge variations in brightness and other factors, all at the same moment.

In the case of the Theta Z1, ISO support has risen to 6400, while the maximum shutter speed is now 1/25000 seconds. You get 19GB of internal storage, good for around 2,400 JPEG images. However Ricoh has also added RAW support, with a free Adobe Lightroom plugin to edit the DNG files.

The proof is in the panoramas

Ricoh isn’t releasing the Theta Z1 until April, or thereabouts, and so the software isn’t final. Even so, I could clearly see the difference in image quality, not only between sample photos taken on the Theta V and the Theta Z1, but when comparing the Theta Z1’s own JPEGs versus the RAW files. I should note, Ricoh provided these samples, but the company tells me they haven’t been edited, and the cropping is my own. 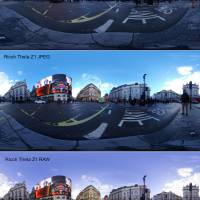 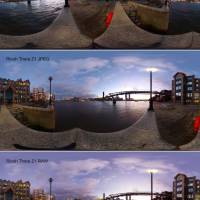 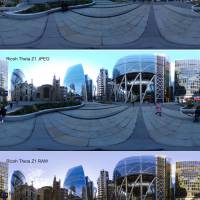 There’s noticeably more detail in the Z1’s pictures versus the Theta V’s. The newer camera handles low-light better, too, as well as darker areas right next to brighter sections. They can get muddy in the Theta V shots, whereas they’re crisper from the Theta Z1. The RAW images have a more purple tint to the sky, but the reality is that you’d probably be doing more significant color grading before you develop them in Lightroom.

Zoom in, and the higher resolution sensors show their worth. You can make out distant text in the Theta Z1’s shots that the Theta V leaves illegible, for example. That may not be a huge deal if you’re viewing an entire 360-degree panorama in a VR headset, but it matters if you’re trying to crop in on a particular section.

The Theta V – which remains on sale as Ricoh’s high-end consumer-focused camera – introduced a whole new architecture for the company, using Android on a Qualcomm Snapdragon processor. As well as making it easier to do things like software updates, it also paved the way for apps and plugins for Theta cameras. That strategy has been carried forward for the Theta Z1. 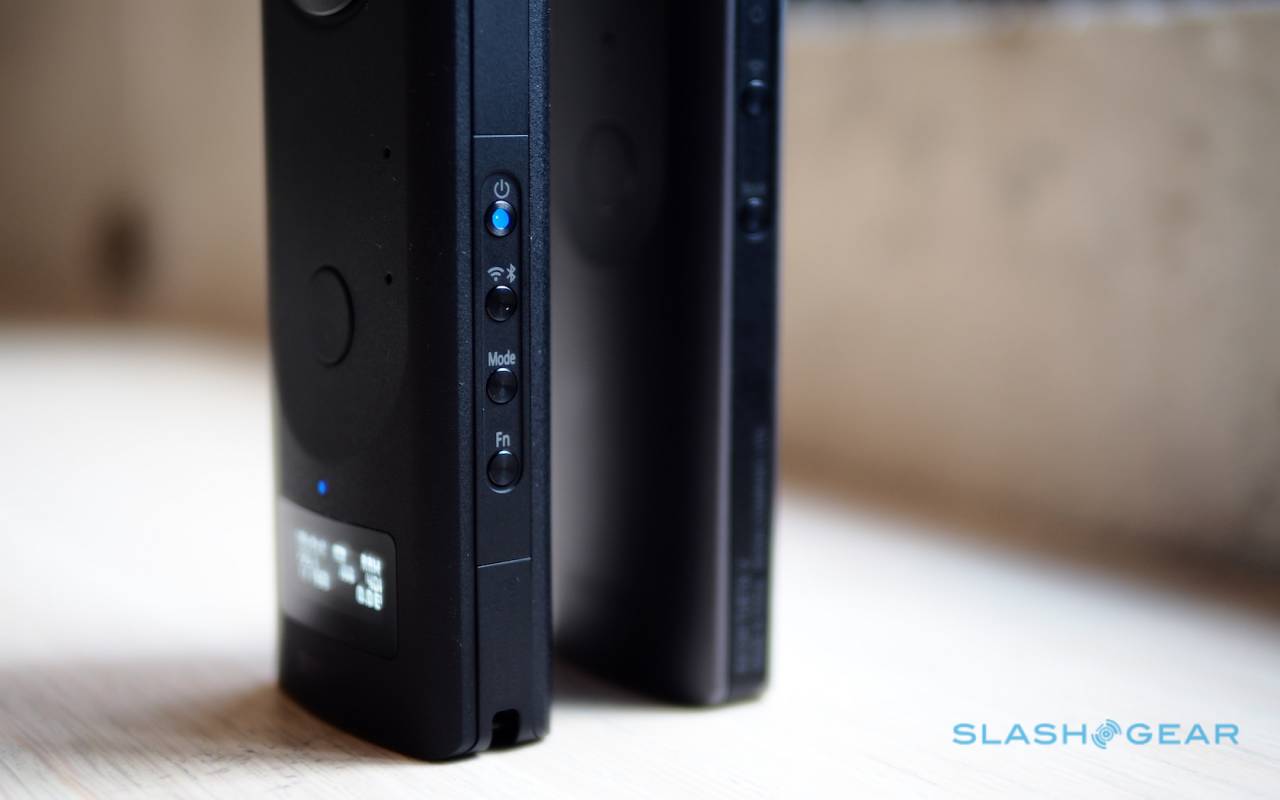 There are actually two ways for developers to integrate with the 360-degree camera. On the one hand, Ricoh has an open API: you could build an app or web service that taps into the camera and controls its sensors and settings. Alternatively, you can build apps for the Theta Z1 itself. Ricoh refers to these as plugins, and they run on the camera’s own hardware.

Ricoh has its own plugins, and will be adding more to the catalog in due course. One I’m particularly curious to see is the Time-shift Shooting plugin, which Ricoh says will be able to remove the photographer from their 360-degree image. There are also 360-streaming options for YouTube, as well as an automatic face blur plugin for privacy in public photos. 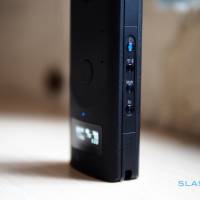 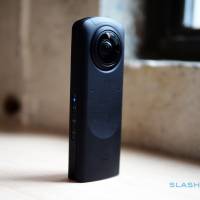 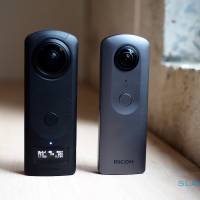 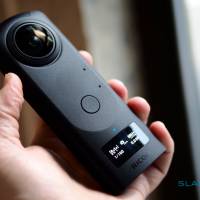 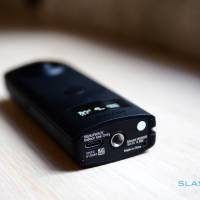 As for third-party apps, they vary from utilitarian through to silly. HoloBuilder has a Theta plugin for live-streaming construction sites to its enterprise service for builders, for instance; at the other extreme, there’s a cat-mode plugin which plays meow sounds from the Theta Z1’s speaker to attract your pet’s attention before taking a photo.

There’s still only a handful of applications designed to run on the Theta cameras, which is perhaps a disappointment given the Theta V launched more than a year ago. Ricoh, though, is clearly hoping to give that process a kick with a more professional camera.

Just who is buying 360-degree cameras?

Though the Theta V was designed with consumers in mind, the reality is that it has been a bigger hit with professional users. That includes pro-photographers and videographers, Ricoh tells me, but also people in fields like real-estate, construction, and architecture. That audience – and their particular requirements – have shaped the Theta Z1’s development. 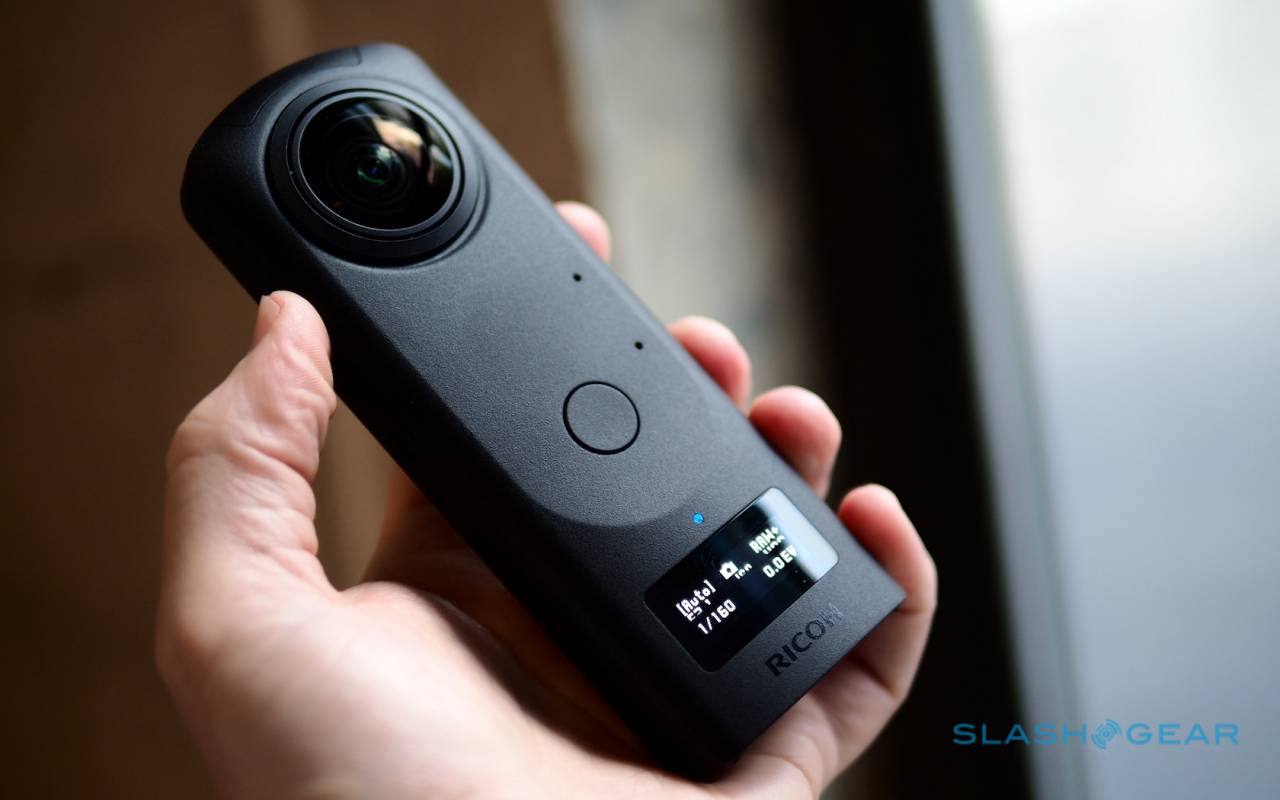 Features like the integrated display will make it easier to use the camera standalone, making it quicker to snap a shot as part of a broader workflow. The improvement in build quality will make it more resilient out in the field. And while Ricoh is still pitching consumer photographers, it’s also carving out a growing niche as the camera of choice for enterprise services.

That’s a category which is far less likely to wince at the Theta Z1’s $999 price, which is more than double that of the Theta V. I suspect photographers who want a noticeable uptick in picture quality will also be tempted, though the mass market is going to take one look at Ricoh’s pricing and likely look to rivals like the Insta360 ONE X, which is considerably cheaper and has a number of trick shooting modes, particularly for video.

How much that will hurt Ricoh in the long-run remains to be seen. Its focus on stills more than video put the Theta Z1 into a particular niche in the 360-degree camera market, and it’s one which is a little less consumer-focused. The reality of just who is actually opening their wallets for such devices, though, suggests that strategy might well be for the best.