Reverse Geocache Puzzle doles out presents depending on location

Weddings are reasonably good fun for those attending, but being expected to provide an often-expensive gift can sometimes irk.  So how about giving a present that demands a little more than simply scribbling a thank-you card; that’s just what Mikal did for the friend who introduced him to Arduino tinkering.  He constructed the Reverse Geocache Puzzle, a wooden box that would only be unlocked when within 2km of a location Mikal preprogrammed into it.

To make things more interesting, the box only allows fifty attempts at locating the correct geocache position.  Press the button on the front and the display wakes for a short period, displays the distance from the secret location, a countdown of how many attempts are left, and then goes back to sleep.  Thanks to the Arduino’s power management systems and the use of a Pololu module, standby draw is 0.01 microamps, which means the four AA batteries should easily have enough juice for the fifty attempts and powering the servo that unlocks the box.

Mikal gave his friend the Reverse Geocache Puzzle with no instructions, and instead expected the happy (but presumably frustrated) couple to figure things out themselves.  There’s also a secret “back door” which he used to gain access during tested, cloaked in some suitably fear-inspiring error messages.  Full details on his project build page. 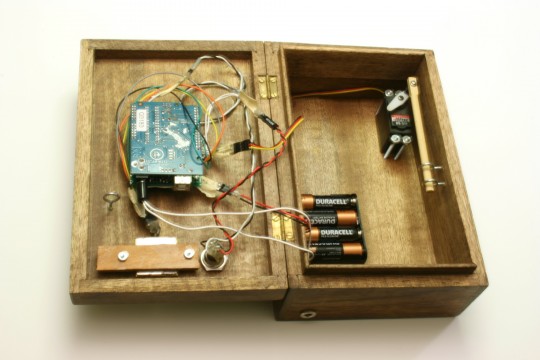