This ain’t your daddy’s Tesla. In fact, the Renault Twizy is arguably the antithesis of the Model S: eye-catching where the Tesla is discreet; cheap where the electric sedan is expensive. Intended for city driving and the sort of short trips where nippy and straightforward are the key factors, the Twizy also manages to be a whole lot of fun, albeit with a couple of caveats (and preferably a pair of gloves). We raised our eco-cred with a Twizy blast around the urban jungle.

The Twizy may be small, but it’s certainly not discreet: expect to be looked at when you’re behind the wheel. The moon-buggy styling, prominent safety-shell cabin design, narrow footprint and comical dimensions add up to a car that gets noticed. Years ago, I used to drive a Smart car, back when they were still an unusual sight on the roads; the Twizy definitely gets the same sort of attention, with other drivers pausing at junctions to gawp, pedestrians stopping still and turning on the spot to watch you zip past, and kids pointing phone cameras at you. 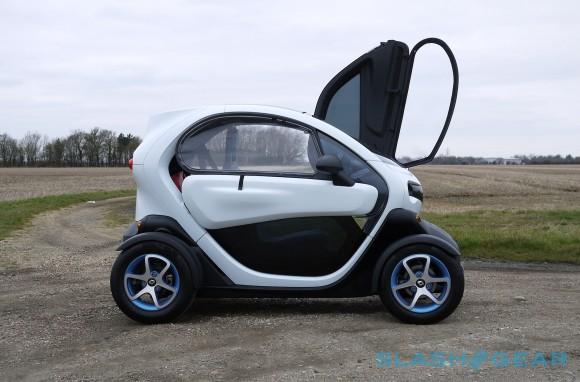 European sales of the Twizy began almost a year ago, though the car is still relatively uncommon. That’s arguably down to the compromises owners have to make: in its base form, the Twizy lacks any sort of doors, for instance. Renault charges £545 ($832) on top of the base £6,795 ($10,370) for the scissor doors, though that still only gets you the side bars and translucent lower sections. In fact, it was only in October last year that Renault relented and offered plastic upper windows as a £295 ($450) add-on.

Even with the “doors” in place, the Twizy’s cabin can be an uncomfortable place to be. There’s no attempt to make it water-tight – there are gaps all around the edges, including huge holes where the scissor bar clicks into the rear locking mechanism that you could easily fit your hand through – and the waterproof seats are sturdy foam rather than something more cosseting. It’s also not a car you’d want to leave your phone or sat-nav in: security is limited to a lockable cubby behind the vestigial rear seat, and since you have to unzip the window from the outside merely to reach through to grab the door-opening switch, anything left in plain view is likely to be snatched.

If the Tesla Model S’ vast, touchscreen dashboard is one example of EV usability, the Twizy’s console sits at the other extreme. There are the usual indicator, light, and wiper control stalks behind the steering wheel, and a pod binnacle showing speed, range, battery status, and drive status above. A hazard blinkers button is on the left, next to two buttons to select either drive or reverse (pressing them both puts the Twizy into neutral), while under the left hand side of the dash is a parking brake. 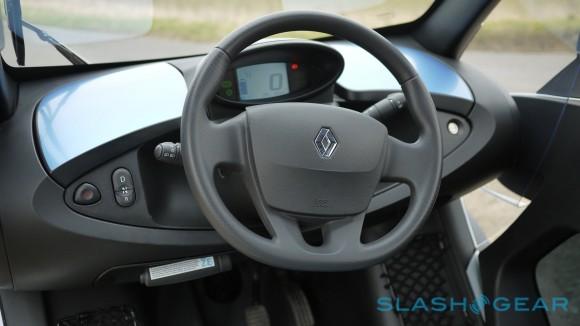 No rear view mirror – there’s no rear window, though a clear plastic roof is a £195 ($298) option – and the wing mirrors are manually adjustable. More worrying is the complete lack of heating options: in an effort to save battery power, you don’t get fans or heated seats, and even with the windows zipped up there was plenty of cold air circulating through the cabin. At least the windscreen gets a heating option for quick demisting. Your right foot is kept occupied with two pedals – accelerator and brake – and there are no gears to consider. 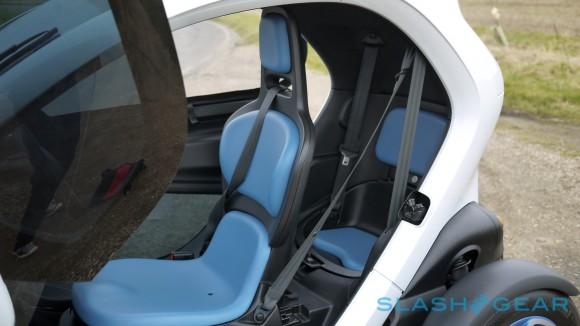 Starting off in the Twizy is an unusual sensation, even if you’re used to driving electric cars. The Renault is pretty much silent initially, and the feeling of openness from the minimal doors makes you feel quite exposed. As the electric motor ramps up (and you suppress the feeling that you really ought to change gear) it starts to work its way up to a heady whine, combining with the whistle of wind noise to make a cabin that you’d struggle to hear the radio in at comfortable levels, if that is Renault actually fitted one.

Then again, perhaps comfort should be left to drivers of $100k Teslas: the Twizy has its own brand of appeal. After the initial disconcert has worn off, you quickly realize that the tiny Renault is in effect a go-kart for grown-ups. The non-power-assisted steering is direct and immediate, and the tiny wheels and minimal seat padding contribute to a ride that tells you everything there is to know about the condition of the road and how much grip you have. Renault quotes a top speed of 50mph (we managed to squeeze out 52mph with the help of a mild slope) but even at sub-30mph rates the Twizy is incredibly fun, demanding you punt it round corners. 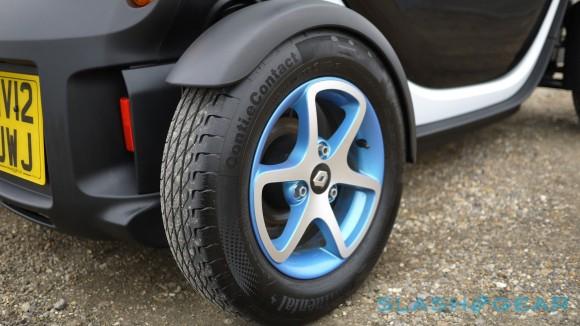 Acceleration lacks the instant verve of other EVs we’ve tried, but is perfectly fine for urban use. Less reassuring is the brake, which feels wooden and overly-stiff. Like other electric cars, the Twizy uses regenerative braking to top up its 52V drive battery – stored under the driver’s seat – with graphics on the LCD showing when you’re using power and when you’re creating it. Maximum range is 62 miles, Renault says, but that’s very dependent on driving style and, more pressingly in the 2-degree centigrade conditions we tried the car, temperature. In fact, we never saw more than 38 miles in estimated range on the display, though with the benefit of regenerative braking that didn’t quite drop in parallel with the actual distance we traveled.

A full charge from a 240V European domestic socket takes 3.5hrs, with the Twizy sprouting a curly extension cord from a hatch in its snout. In fact, the sticker price doesn’t actually include the drive battery at all: Renault is instead leasing them to owners, with finance packages depending on estimated usage (from 4,500 to 9,000 miles per year, ample considering this is not a car for the freeway) and length of agreement. For a year’s rental at the minimum mileage, you’re looking at under £0.15 ($0.22) per mile, not including actually charging the Twizy up. 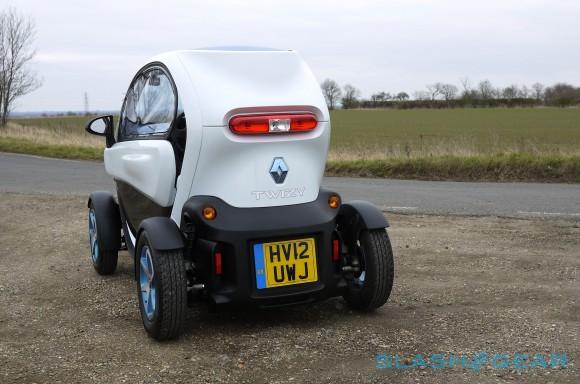 The Twizy is undeniably a silly car. It’s impractical if your travel isn’t limited to urban use, potentially uncomfortable in inclement weather, suffers from limited range (like most small EVs), and is fairly expensive for a supermini once you add in “essentials” like doors and windows. The version we drove came to around £8,500 ($13,000) when you added in the wheels, doors, windows, clear roof, and a Parrot hands-free kit, which is a lot for a city toy.

And yet… there’s something addictive about it. Maybe it’s the purity of the driving experience, or that the bemused and entertained expressions of the people you whiz past can easily distract you from the fact that you’ve had to dig out gloves and a hoodie in order to keep warm. Maybe it’s the fact that you quickly start to believe you’re at the wheel of a lunar rover, or a car from a Gerry Anderson show. Stopping to recharge doesn’t seem like such a chore when you can combine it with warming up again over a coffee, watching pedestrians pause to ogle the Twizy parked outside.

Renault’s ambitions for the Twizy in the UK are conservative: whereas warmer countries on the European continent might be able to ignore the open-air cabin, it’s far less fun in rain and wind. Still, while we can appreciate the efforts of Tesla and the big car companies attempting to make EVs more mainstream, there’s no denying that the ridiculous (and ridiculously good fun) driving experience of the Twizy makes us glad Renault hasn’t gone entirely sensible as it looks beyond gas engines.