Renault channels Steve Jobs: You don’t know you love our electric buggy yet

There’s a vehicle out there by the name of Renault Twizy, a cross between a buggy and a car, smaller than a Smart Car and made specifically for city use. This vehicle has been tested out by Antony Ingram at Green Car Reports and as they describe it as a “high-rise electric go-cart,” it seems at first to be a bit strange for $10,000 and $65 a month for battery rental, even if that’s one of the cheapest electric vehicles on the market today. Renault is noted, on the other hand, has having prepared for the eventuality of the unconvinced customer with a Steve Jobs quote, of all things.

It’s from a Renault presentation from very recently that GCR notes Renault quoted Steve Jobs thusly: “A lot of times, people don’t know what they want until you show it to them.” This vehicle certainly isn’t something we’ve seen before, and it’s definitely not something we expected to want. The most basic “teen-friendly” Twizy 45 will cost you $9,150 for starters, while the Urban-spec Twizy runs up right around $10,000. You can add a half-door option for $770 and the most expensive a Twizy will get you is the Technic version’s $11,000.

Sound like a deal for you for a buggy?

This vehicle is made for the urban commuter, but isn’t just limited to those of purely student-run interest. One of the questions the folks at Green Car Reports fields is “Will it drift?” This of course refers to the ability of the car to slide around corners with a skilled combination of brakes and turned wheel action – as seen in illegal Japan underground races in the oddly popular Need for Speed: Tokyo Drift, in theaters several years ago. The answer to the question is yes and no – you can make it “slide” a bit, but drifting appears to be off the menu. 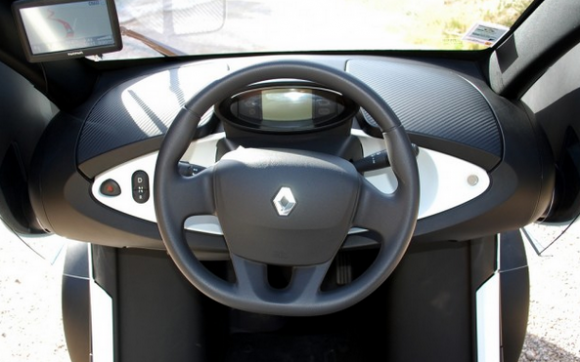 You can see all four wheels from the driver’s seat, and the doors open up Lamborghini-style. The car is so small you can avoid potholes and bumps without straying out of your standard car lane, and the vehicle will allow you to avoid quite a few road taxes and congestion charges throughout Europe.

Will it come to the USA? Almost certainly not. But we can dream!