Before we begin speaking about how awesome it is that the Raspberry Pi Alpha version boards are ready for shipping, it would be remiss of us not to explain what Raspberry Pi is in the first place. The Raspberry Pi Foundation is a group which is preparing to release a single-board computer for right around $25 USD (aka approximately £ 15 GBP) meant to stimulate basic computer science in schools around the world. What’s happening this weekend is that we’re being treated to a video filmed by Eben Upton, Director of the Raspberry Pi Foundation, as he shows of the newly shipped alpha boards for this project.

The Raspberry Pi foundation is confirming this weekend that Dom (another Raspberry Pi official) has been able to access an SD card, a network, and boot Linux from the alpha boards without a hitch. At the moment we’re only able to see a video of Upton speaking about the board and the hardware on it, but later this week we should be able to see demos of the board working in full action. Only a few images of the full working board have been released, and the video is filmed quickly, yet remains as informative as the foundation wishes it to be at the moment.

*NOTE: Raspberry Pi official and official blog poster Liz notes the following about the video itself:

The background howling is Mooncake, the Raspberry Pi Cat, and the horrible grinding sounds during the closeups are signals that I need a new video camera.

If you’d like to see this board in action via Debian booting and pinging the BBC website, you’ll be able to do so by checking out the Raspberry Pi Blog – lots of numbers and letters that all ad up to the system working clearly. Now all we’ve got to do is continue to wait for this awesomely inexpensive board to be released. Will such a sweet situation actually change the commonality of computer science classes around the world? Turn an item inexpensive and it’s got two possible paths: death at the hands of those who take such a marker as low quality in the build, or a complete cornering of either a specific or broad market as all competition struggles to catch up.

Which is it gonna be? 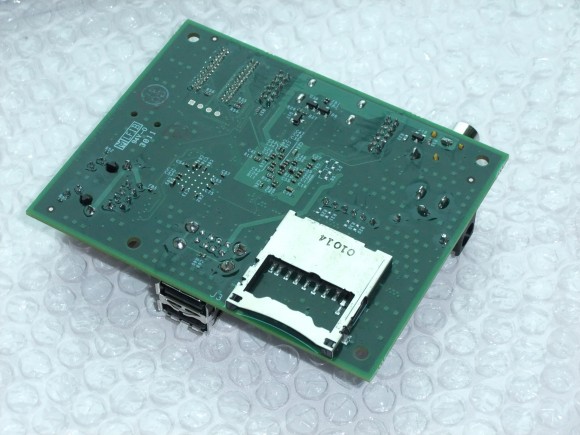