The Qualcomm Vuforia Augmented Reality platform is just one of many impressive technologies that the San Diego based company has in the works, and this week we they showed off a brand new addition. We’ve seen Vuforia in the past, making magazines and books come to life on our mobile devices, but at Uplinq they revealed Smart Terrain. Which brings your living room landscape right into your mobile game.

Vuforia is transforming the way games are played, introducing Augmented Reality elements where books and characters come to life, and readers can interact with them on their smartphones and tablet, and much more. We’ve seen games use Vuforia, but Smart Terrain allowed something even better. Imagine snapping a 3D picture of your living room or coffee table, then importing that terrain into your game, and playing on it. That’s exactly what we have.

Smart Terrain with Vuforia was shown off on stage at Uplinq by Qualcomm’s own Jay Wright on an Zperia Z tablet equipped with a 3D sensor called the PrimeSense Capri. Basically like the Kinect from Xbox. Smart Terrain then takes a 3D image, adds a layer called SmartMesh to give it some character and depth, and implants it right into the game being played. A tower defense type title. Tissue boxes, vases and more all were instantly towers with enemies shooting fireballs and more. It was really quite interesting. Take a peek below.

Then gamers will be able to add more characters to their game with a quick scan using the PrimeSense. Anything from toys around the house, to in this game, a Snapdragon to fly around and kill all the enemies who were attacking the village. Fitting right.

This new technology is in the beginning demo stages for now, but will reach developers in early 2014. Hopefully later next year we’ll be building our own levels and using our surroundings and homes for the battlefield. Making for an even deeper, more immersive mobile gaming experience. 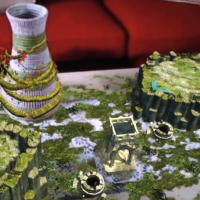 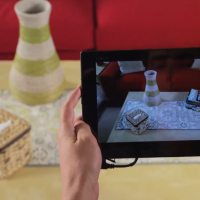 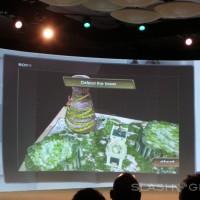 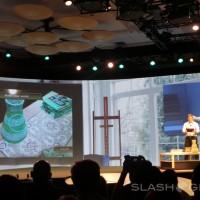