Qualcomm has outed the first in its next-generation Snapdragon family, the MSM8960, a dual-core chipset with around 5x the performance of the original Snapdragon, 4x the graphics performance, and an integrated multi-mode modem supporting both 3G and 3G LTE. Expected to being sampling in 2011, the MSM8960 will be built on 28nm processes, and use 75-percent less power than the first-gen Snapdragons.

As well as the cellular connectivity, there’ll be the usual WiFi, Bluetooth and FM, along with integrated GPS. Unfortunately, it’s unlikely that devices actually based on the Snapdragon MSM8960 will show up until sometime in 2012.

Closer in the pipeline, however, are Qualcomm’s dual-core MSM8260 and MSM8660 chipsets, using a pair of current-generation 1.2GHz Scorpion cores along with Adreno 205 GPU, and built using 45nm processes. According to Qualcomm’s roadmap, devices using the MSM8260 (which has integrated HSPA+ support) and the MSM8660 (which has HSPA+ along with CDMA and EVDO support) should start appearing on the market in 2011. 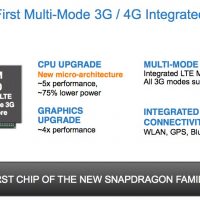 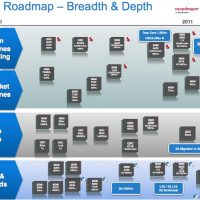 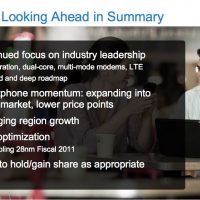