PureView: The Tech Behind Nokia’s Salvation

Nokia has big plans for PureView, including thinner handsets and Windows Phone support, though there’s more than just branding that’s getting in the way of slimming the smartphone camera tech. We grabbed some hands-on playtime with the Nokia 808 PureView in Germany this week, at the headquarters of long-time photography partner Carl Zeiss, where we not only discovered just what the camera is capable of, but some of the decisions – technical, product and otherwise – behind the PureView concept. And make no mistake: if any one thing signifies Nokia’s potential salvation in the mobile industry, PureView is it.

Big sensors in smartphones aren’t new, but neither have we seen a vast improvement in mobile photography. Backside-illuminated sensors, such as are included in the iPhone 4S and HTC One X, have certainly improved low-light photography, but we haven’t seen a ground-shaking difference stepping up from, say, 5- to 8-megapixels. Moreover, even with a good mobile camera like on Apple’s smartphone, it’s all too easy to shoot a bad frame, and that’s before you even get to things like resolution-shedding digital zooms. 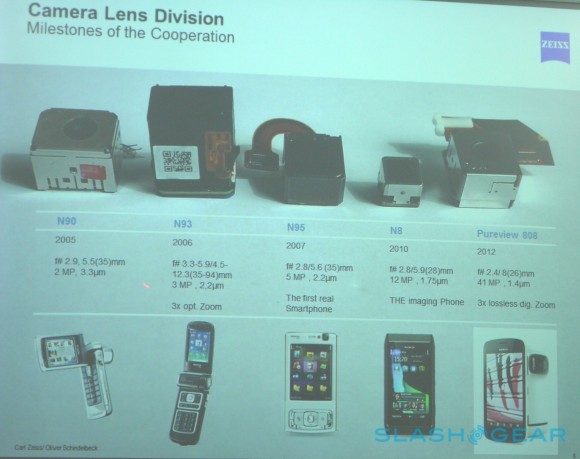 Listen to Nokia and Carl Zeiss, however, and you soon start to realize that rival phone manufacturers simply aren’t thinking big enough. “The art and science of making a really good digital camera lies in combining a lens of convincing performance with an adequate imaging sensor and capable imaging algorithms” the two firms said all the way back in 2006, before deciding that “we need to set the standard in imaging in phones” the following year.

Thus was PureView born, not a single camera-phone but an umbrella technology consisting of three strands: a high-performing sensor, complementary lenses and optics, and proprietary Nokia processing. It’s important to remember that PureView doesn’t necessarily mean a 41-megapixel sensor, though that’s the headline-grabbing figure Nokia opted for with the debut model to wear the brand.

It wasn’t a random choice, either. Nokia’s goal was a lossless zoom with the quality benefits of optical but the convenience and reliability of digital, and according to the company’s market research, head of imaging Juha Alakarhu told us, a 3x zoom with a 5-megapixel final image was the sweetspot for consumers. 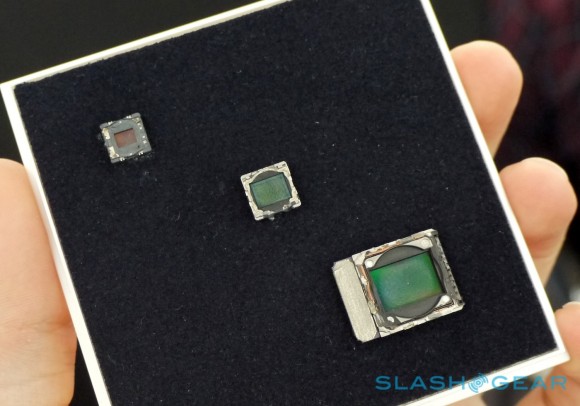 For that to be possible – taking out a section of an overall frame, equal to a 3x enlargement, and still end up with a 5-megapixel image – Nokia needed a 7728 x 5368 sensor, or 41-megapixels. It also made for a relatively huge chip, at 1/1.2-inches, and allowed for the oversampling we discussed in our previous hands-on report.

Therein lies the cause of the 808 PureView’s bulk, Vesa Jutila, Nokia’s head of product marketing, explained. The sensor itself is, while wider and longer than that of 2010’s N8 for instance, not especially thicker. However, it’s when you take into account the required lenses that the size begins to mount. It all comes down to the laws of physics, Jutila says. “If you want high resolution sensors, you need lenses with sufficient focal length.” 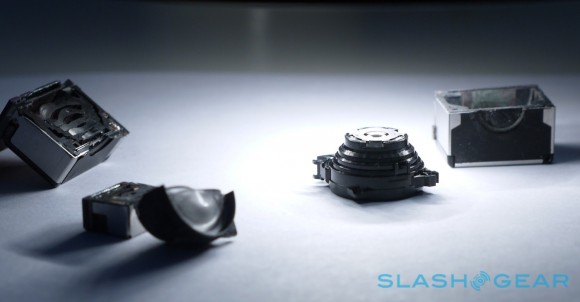 Sat in the camera module is a complex five-lens assembly with a range of aspheric surfaces, capable of playing light out over the full extent of Nokia’s pixel-rich sensor. It’s that lens stack which creates the heft, topped with a Gorilla Glass lens cover to match the similarly-toughened touchscreen. It’s also the lens stack which presents the biggest hurdle for slimming PureView technology down, since it involves more than just trimming a sensor.

Nonetheless, Nokia is definitely looking to slimmer iterations, targeting the sort of buyers that might not be so photo-centric in their obsession, and who want decent images but also a more pocket-friendly handset. Set to likely run both Symbian and Windows Phone, depending on model, these upcoming devices will bear the PureView brand but deliver it in different ways, albeit with Nokia sticking to a few core tenets. 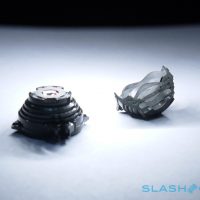 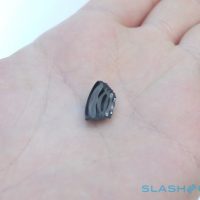 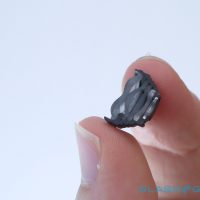 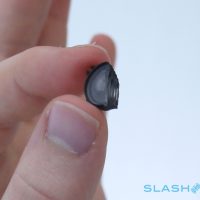 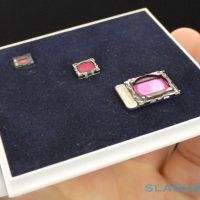 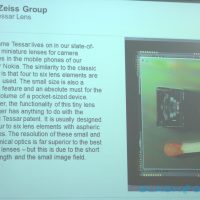 Keeping the oversampling of the PureView algorithm and fighting off any sign of interpolation is arguably the most important, Alakarhu told us. Fitting a tiny sensor and then relying on software guesstimation doesn’t fit with the PureView brand, he says. There’s a reason, after all, that professional cameras haven’t followed their cellular cousins in adopting smaller and smaller CMOS sensors, in the name of shedding bulk. A big sensor means more light hitting it, which adds up to more information to pump into the final frame.

PureView is all about information: the sensor may be 41-megapixels, and the 808 capable of 38- or 34-megapixel stills, but Nokia’s goal is actually a new level of brilliance in 5- and 8-megapixel images. What could be an option, however, is doing away with the lossless zoom requirement, in fact ditching the zoom altogether, and opting for a compromise of sensor bulk and resolution with perhaps 20-megapixels rather than 41. That would allow for a diluted four pixel oversampling, combining four individual pixels for each “superpixel” from which the eventual 5-megapixel image was constructed.

Not every future Nokia device will bear the PureView brand, Jutila said. It will instead be used on a subset of devices for those who demand better quality imaging from their handsets, and who are willing to compromise on some degree of size. “Thinner PureView handsets are coming” Jutila insisted, but there’s a broad scope for just how thick they could still be between the slimline Lumia 800 at 12.1 mm, and the 18.07 mm of the 808 at its thickest point. Perhaps even more exciting, Jutila also said that higher resolution PureView devices are also a possibility, declining to discuss any specific roadmap details, but suggesting that more pixels than even the 808’s forty-one million could be on offer. 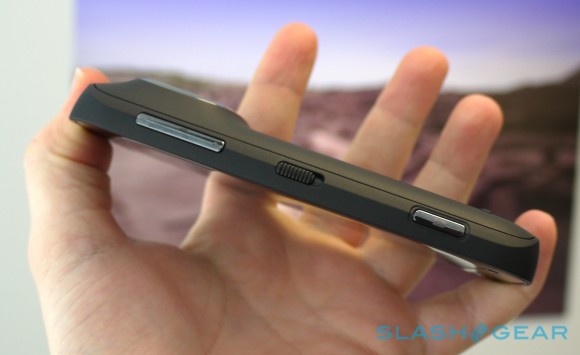 Ironically, even the 808 PureView doesn’t feel so large after a while. We had a brief chance to revisit the Nokia today, and what had felt chunky and swollen – albeit also pumped full of promise – when we first saw it earlier this week, had evolved into a more familiar shape. The phone fits neatly into the hands, the curve of the casing and the protruding lens bulge allowing your fingers to wrap around it comfortably, and the side buttons fall under your fingertips. There’s no need to take one hand away to use pinch-zooming, either – there’s a single finger slide-zoom instead – and that helps keep shots steady. Sure, it’ll never be considered a small phone, but whether it’s a side-effect of the growing respect for its imaging capabilities, or simply regular old familiarity, what initially appeared vast somehow becomes less objectionable.

PureView is, for Nokia, a vital point of differentiation. On the one hand, it singles out the company from its smartphone rivals across the board – “It took us five years to do it,” Jutila pointed out, “now we’re happy to say to the others, ‘do the same’ … It’s a huge benchmark for the industry, what imaging performance should be” – while on the other it, like Nokia Drive and Nokia Music, will offer something unique from the rest of the Windows Phone status-quo. In Lumia, Jutila reminded us, photography is one of the three core pillars Nokia is focusing on; the company has no current plans to license PureView technology out to its rivals, and as the five year incubation suggests, it’s not just a case of slapping together a big sensor and a powerful GPU to crunch data from it. 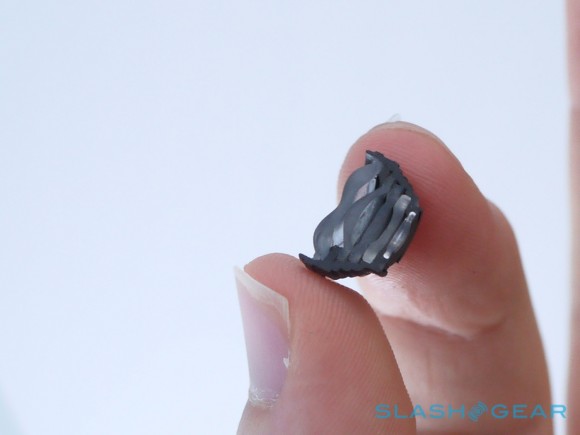 If anything will keep Nokia relevant, it’s this sort of investment. As Huawei, ZTE and numerous others have demonstrated, it’s incredibly straightforward to create a cheap smartphone from off-the-shelf hardware and software. It’s equally simple to customize a generic OS, like Android, until it looks suitably different for your brand. Where key products from companies like Apple, Samsung and others succeed is in the areas of user-experience that aren’t so readily replicated: more complex features, time-consuming in their conception and requiring specialist skills or supplies, which help them stand apart from the crowd.

Apple has its famed holistic ecosystem, making the iPhone predictable enough for first-time smartphone owners, but also flexible enough for hundreds of thousands of developers to push the envelope with apps. Samsung, meanwhile, has its supply chain majesty in its favor: incredible displays, cutting-edge processors and high-speed memory. 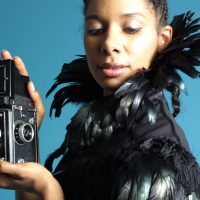 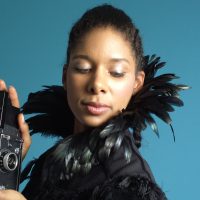 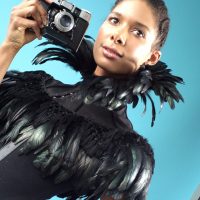 Nokia’s differentiator used to be Symbian. Over time, though, that proved to be a difference that consumers didn’t actually want; now, with Windows Phone, the company is in what for it is the unusual situation of not having the pool pretty much to itself. Apps like Nokia Drive were the quick-fix to that, cooked up in the few months in-between adopting Microsoft’s OS and launching the Lumia line-up; now, we’re seeing the more long-game strategy appear, with technologies like PureView that throw down the gauntlet to rivals and challenge them to compete on truly innovative, distinctive features.

Five years was a long incubation for PureView, but the 808 isn’t the end product of that development: it’s just the first of many. You can find the fruits of our photo journey with the 808 PureView in our full sample gallery. 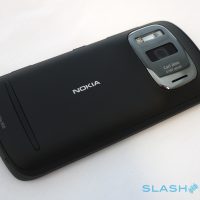 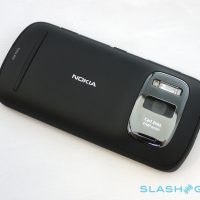 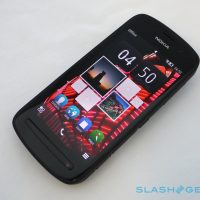 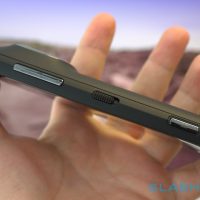 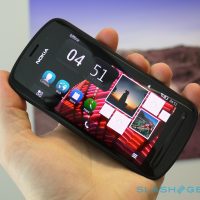 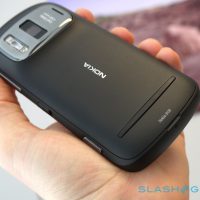 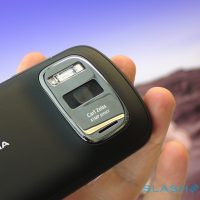 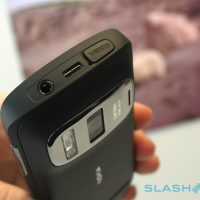