New evidence was discovered that suggests feathers started appearing on animals around 70 million years earlier than previously suspected. Two anurognathid pterosaurs were studied by a group of paleontologists and research was published this week on their findings. This little monster was previously known to have at least a little bit of fur covering its body – now it would seem that it had four different sorts of feathers, too!

Four individual types of feather were discovered on the anurognathid pterosaur, including simple filaments, filament bunches, filaments with a tuft, and down feathers. These feathers were all relatively small – certainly no eagle wing feathers, by any measure. But they’re feathers, just the same. Above and below: An official reconstruction of the creatures we’re talking about today, by Yuan Zhang. 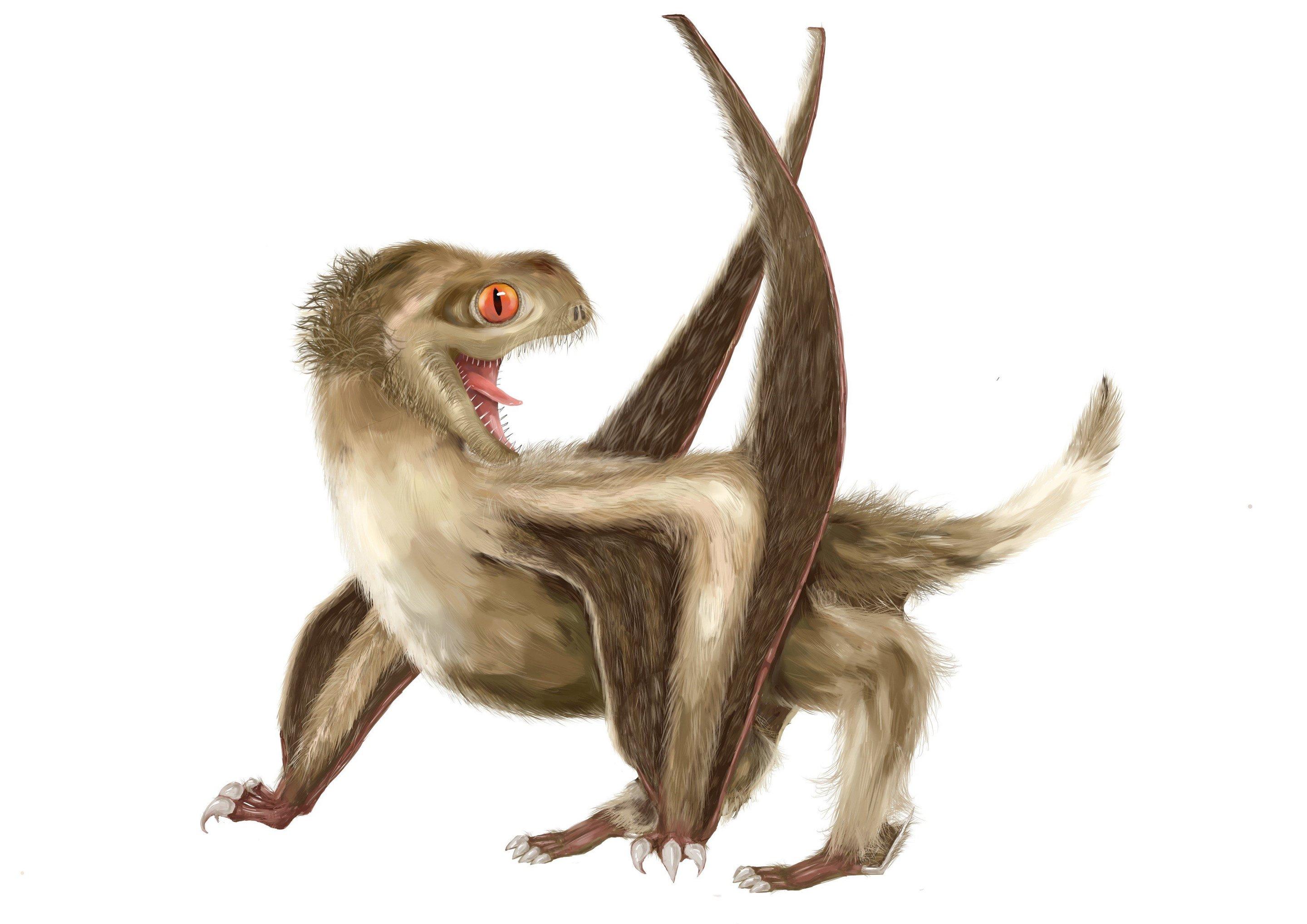 Below you’ll see a set of feather illustrations made for the report published this week. Each of these sorts of feather were discovered on the flying dinosaur in the study. This specific illustration was published by Nature with the article cited at the very bottom of this article – also using the same data, from a slightly different perspective. 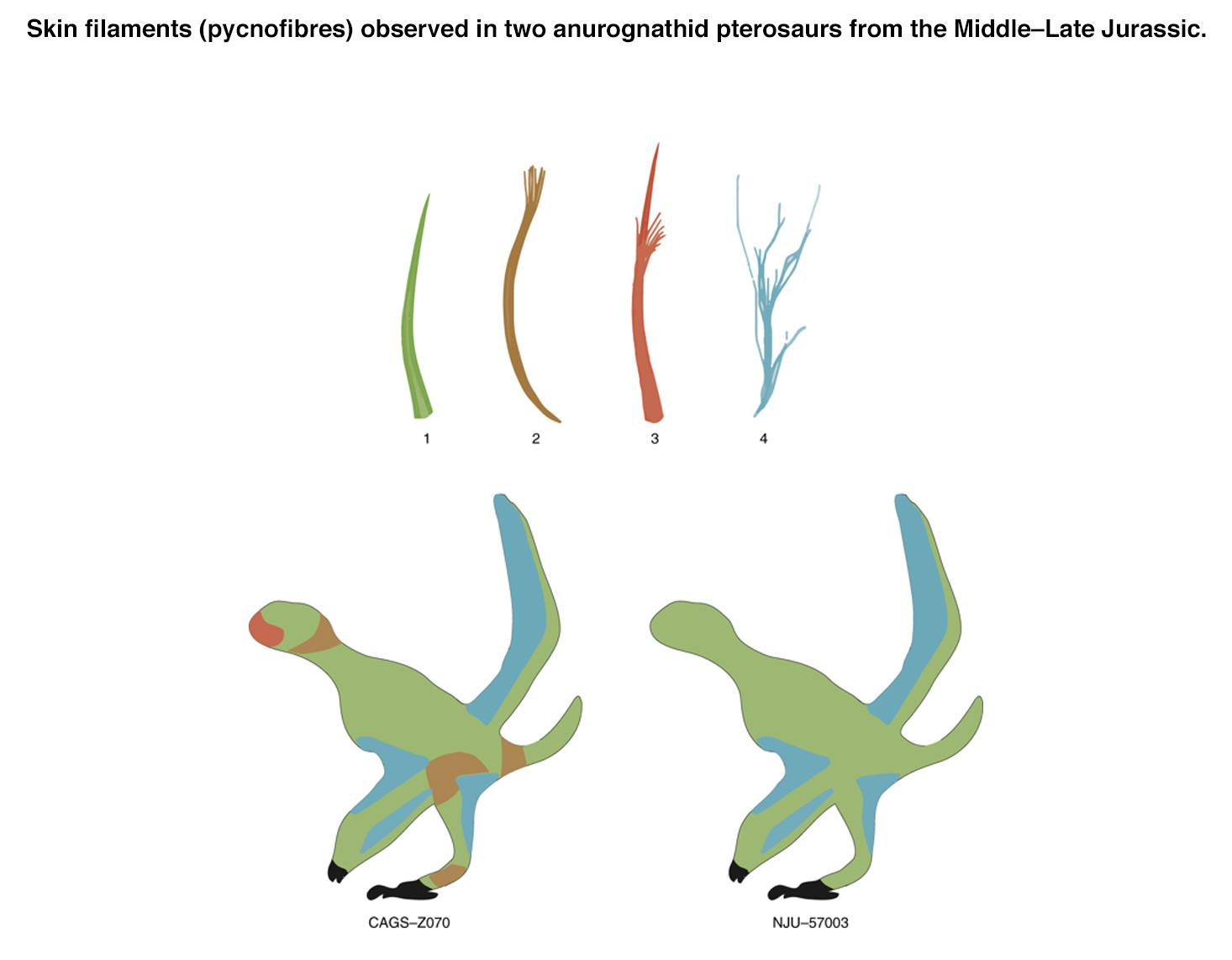 Next you’ll see some of the locations where each type of feather were identified on dinosaur CAGS–Z070. This is one of two anurognathid pterosaur specimens used in this study, both of which came from the Daohugou Formation in Inner Mongolia. 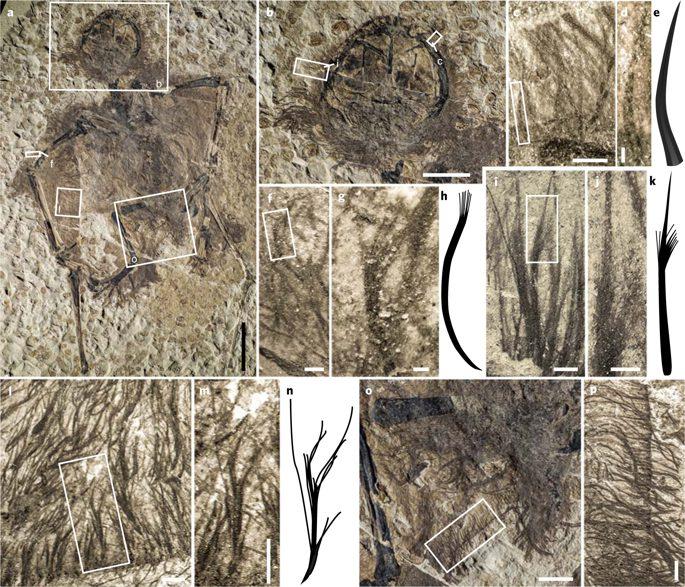 “We ran some evolutionary analyses and they showed clearly that the pterosaur pycnofibres are feathers, just like those seen in modern birds and across various dinosaur groups,” said Professor Mike Benton from the University of Bristol’s School of Earth Sciences, one of the researchers that took part in this study.

It was previously accepted that feathers were unique to maniraptoran dinosaurs – and forward. The earliest minaraptora found lived in the Jurassic Period, and the latest still live today (as birds). Two possibilities pop up here: One is that feathers and feather-like structures appeared independently in pterosaurs. The other possibility is the more likely of the two – that wings evolved from parts belonging to even older dinosaurs (predecessors to these) – to the tune of ancestral archosaurs.

According to the study, “The presence of feather-like structures suggests that anurognathids, and potentially other pterosaurs, possessed a dense filamentous covering that probably functioned in thermoregulation, tactile sensing, signalling and aerodynamics.” If these findings are indeed feathers, they point toward an evolutionary starting point that popped up well before the otherwise eldest feathers ever found.

“Despite careful searching, we couldn’t find any anatomical evidence that the four pycnofibre types are in any way different from the feathers of birds and dinosaurs,” said Dr. Benton. “Therefore, because they are the same, they must share an evolutionary origin, and that was about 250 million years ago, long before the origin of birds.”

NOTE: The term “Pterosaur” is sometimes colloquially referred to as “Pterodactyl.” This is sort of like referring to all adhesive strips as Band-Aids or all in-line skates as Roller Blades. In fact all pterodactyls are pterosaurs, but not all pterosaurs are pterodactyls. Pterodactyloidea is a suborder of the group pterosaur.

ALSO NOTE: the same issue of Nature included an alternate look at the same data. In a paper entitled “Pterosaur plumage”, Liliana D’Alba suggested the following: “Imaging of pterosaur skin reveals evidence of coloured feather-like structures, but whether these are homologous with true feathers is open to debate.” As with the paper cited above, this paper is in Nature right now, in Nature Ecology & Evolutionvolume 3, pages12–13 (2019).