PSN is down and Sony isn’t handling it very well

It was on Christmas Day that this attack began, with the Lizard Squad demanding their claims of attack be retweeted on Twitter. It wasn’t immediately clear what their aims were with the attack, only that they were, in fact, behind it.

This claim was substantiated by Kim Dotcom’s offer to the hacker group to provide Mega premium account subscriptions so long as they don’t attack Xbox Live or the PlayStation Network again.

At approximately 11AM Central Time, a Lizard Squad Twitter account suggested that the team was no longer attacking either the PlayStation Network or Xbox Live. Instead they’d moved on to testing the underground internet known as Tor for weaknesses.

Meanwhile the Sony PlayStation feedback network has been doing a less-than-stellar job of letting players know when their network will be back online. Reports of no multiplayer (regardless of subscription), offline time for games that shouldn’t normally require the web in the first place, and lack of abilities in the PlayStation Store have all been met with notes such as the following:

It’s not looking great. Even while the attackers suggest they’re no longer attacking, PSN still looks quite down and out at the moment – their status page suggests that they’re offline with a general message that reads as follows:

We are aware that some users are experiencing difficulty logging into the PSN. We will update this article with any changes that occur in regards to this issue. Thank you for your patience.” – PlayStation Knowledge Center

Meanwhile the Xbox Live Status center provides a slightly more extensive explanation of what’s up and what’s down, suggesting that both “Purchase and Content Usage” and “TV, Music and Video” are on “Limited” mode. Microsoft also provides links that allow you to get notified via text message when any one of their downed services have been brought back up. 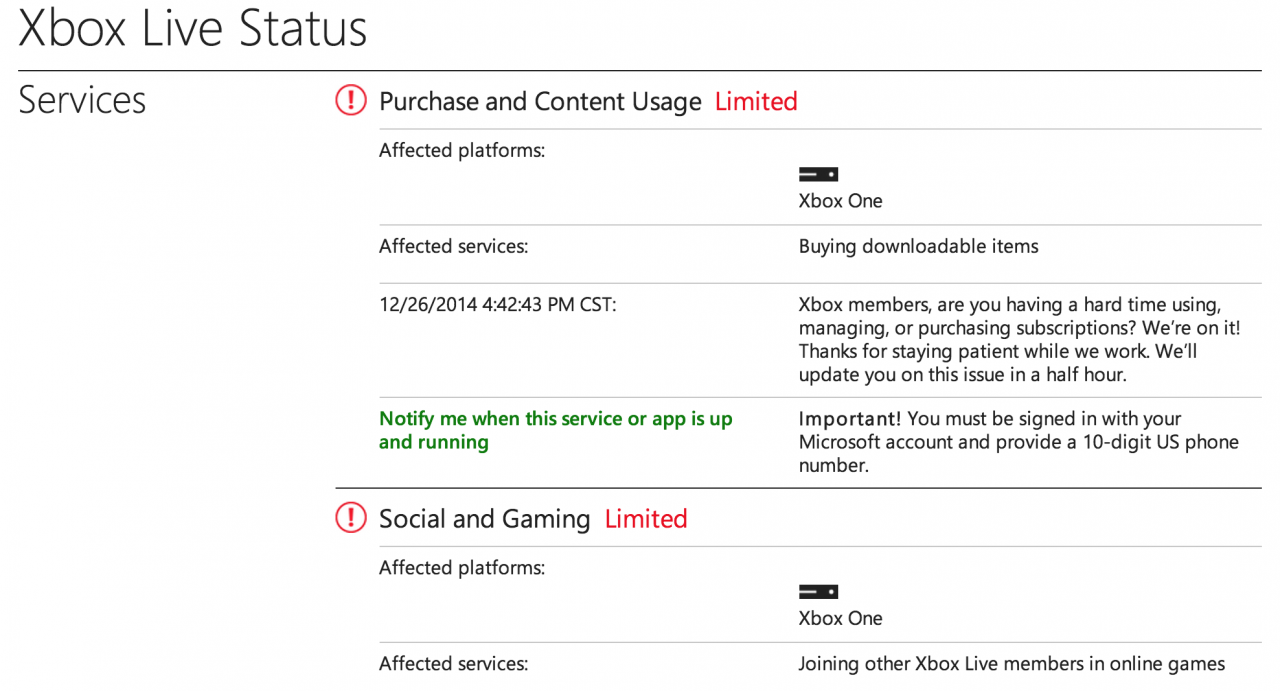 Microsoft’s page for Xbox Live also gives unique status updates, most of which are updated within the half hour. You’ll see IGN, Maxim, and MLG.TV apps with “Limited” status right now as well, but it’s doubtful these down-times have anything directly to do with the overall attack at hand – or uniquely.