One very early listing on GameStop has revealed the release date for a game we didn’t know until now would certainly exist. This game is The Walking Dead: Game of the Year Edition (GOTY), ready for PlayStation 4. This game has been released in this edition on a couple of other platforms before, and will head to the newest in new Sony hardware by June 17th.

This same title has been released for PlayStation 3, Xbox 360, and the PC. It’ll be coming to both the Xbox One and the PlayStation 4 on the same date, it would seem, and GameStop includes their “pre-order low price guarantee.” This should be easy, in this case, as no other company would date price it above $29.99 USD. 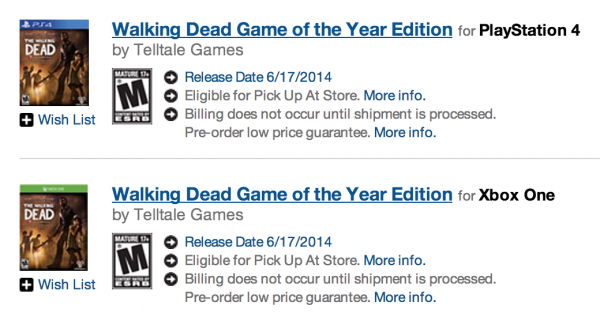 Above you’ll find listings for both the Xbox One and PlayStation 4 versions of the game. Both suggest a June 17th release date in-store at GameStop.

Meanwhile the PS3 and Xbox 360 versions of this game (in Game of the Year Editions, even), are knocked down to $19.99 new. No details are included on this release as of yet besides notes from previous releases on other platforms.

You can probably safely assume you’ll find this game coming with the 400 Days DLC, behind-the-scenes video, and the Walking Dead game soundtrack. Developers at Telltale have also recently announced The Walking Dead season 2 game being made ready for PS Vita on April 22nd – today.