This year we got wind of a company by the name of Project Paperless, a group of “patent trolls” whose goal it was to target companies who didn’t have legal means to defend themselves with patent claims for items such as scanning and emailing PDFs. In short, this means that you, as a business, would receive a legal threat from P.P. demanding $1,000 USD per employee for their actual physical use of a scanner device in your office because they own the patent that describes the device’s use. Through the year they’ve been targeted themselves by some rather angry business owners who decided that, “no, we’re not going to freak out and pay you this absurd amount of cash, we’re going to see first if you actually have the rights to request such a sum!” 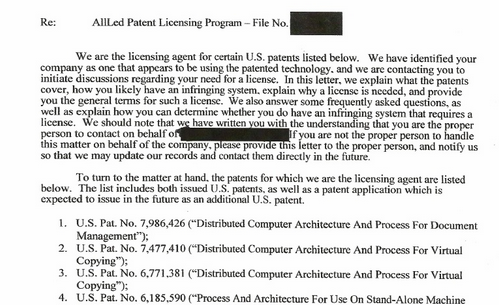 Vicinanza investigated and found that the initial list of businesses that was being targeted by Project Paperless was lifted directly from the “Atlanta’s Best Workplaces” list published each year by the Atlanta Journal-Constitution. Speaking with the heads of the companies on that list this year, he found that the same legal threat letter he’d received was being sent to each company, one by one, under a set of “at least eight different shell companies”, each of them with six-letter names like GosNel, FasLan, and AdzPro.

U.S. patents 6,185,590, 6,771,381, 7,477,410 and 7,986,426 were and continue to be asserted against companies of all sizes, many of which have settled and paid up without question throughout the year. BlueWave went to court with Project Paperless as Vicinanza refused to pay any amount of cash to them. Vicinanza did a Prior Art search (that ended up costing him around $5,000 USD) and sent the results to the Project Paperless lawyers and filed a third-party complaint against Xerox, Canon, Hewlett-Packard, and Brother through his lawyer Ann Fort.

None of these scanner makers had to come to court (or even really had a chance to) because two weeks after the third-party complaint was filed, Project Paperless disappeared. The case was dropped, and no settlement was made.

The Hill, Kertscher, and Wharton law firm today is associated most with the Stop Project Paperless campaign, an anonymous effort to make the information about Project Paperless (basically everything above) public. Project Paperless has since dismantled, or so it seems, reconstructing themselves under the holding company MPHJ Technologies.

MPHJ Technologies is a mysterious company whose owners remain anonymous, and letters essentially the same as detailed above continue to be sent out by companies by the name of AccNum, AllLed, AdzPro, CalNeb, ChaPac, FanPar, FasLan, FulNer, GosNel, and HunLos. If you or your company have been targeted by one of these companies or a similar letter, please, contact legal representation rather than immediately paying a flat sum. It’s quite likely you’ll have more than enough legal ground to stand on – stay strong!