This week we’re getting our first scientific look at Google’s Project Glass smart glasses ability to use its frame as a trackpad. You’ll be tapping your way to victory just like Marvel Comics’ Cyclops when you get a pair of these babies on, and with no less than a fully patented bit of touch technology. Project Glass is a technology that we’ve seen several times in the wild now and will likely see next up-close at Google I/O at the end of this month.

This patent was filed back on the 25th of May in 2011 and was just accepted today. The name of this patent is “Wearable heads-up display with integrated finger-tracking input sensor” and it refers to technology patents dating back to 1998 with Sony’s Image Display System. This brand new patent filed by Google was assigned to Liang-Yu Chi, Luis Ricardo Prada Gomez, Robert Allen Ryskamp, and none other than Sanjay G Mavinkurve. 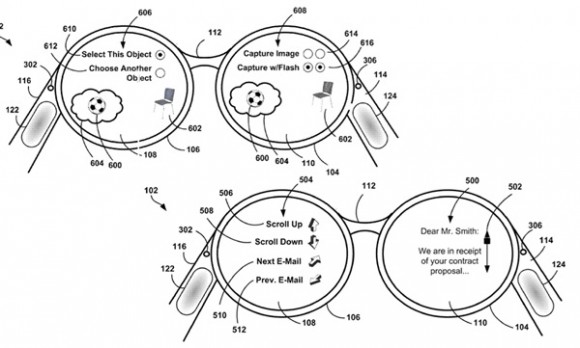 The description for this bit of the equation reads as follows, in brief:

“…wherein the first finger-operable input device is substantially transparent, and a second finger-operable input device secured to the wearable frame structure via a second of the two projections and configured to provide gross-motor input information to the processor and sense at least one of a position and movement of a finger along a planar direction relative to a surface of the second input device, and to provide corresponding input information to the processor.” – Google Patent

This patent application is of course massive and covers a whole lot more than just the basic description of the touch panel(s). Feel free to dive in if you wish, and let us know if you find any other juicy bits! Meanwhile we’ll be heading back down the rabbit hole with our trusty Project Glass timeline below!