It’s no secret that Porsche’s SUVs have been quietly underwriting the automaker’s more enthusiast-focused cars for some time now. Models like the Cayenne and Macan have found a healthy audience of drivers seeking the driving experience and the badge of a Porsche, but who need more practicality than from, say, a Cayman. You could call it compromise, but spend some time in the Porsche Macan S and you might start to wonder if it’s the sports car drivers that are missing out.

The smaller of Porsche’s two SUV models, the Macan has always been the more shapely. That’s never more the case than after the most recent refresh, which tightened up the Macan’s detailing and added a trunk-spanning light bar borrowed from the 911. 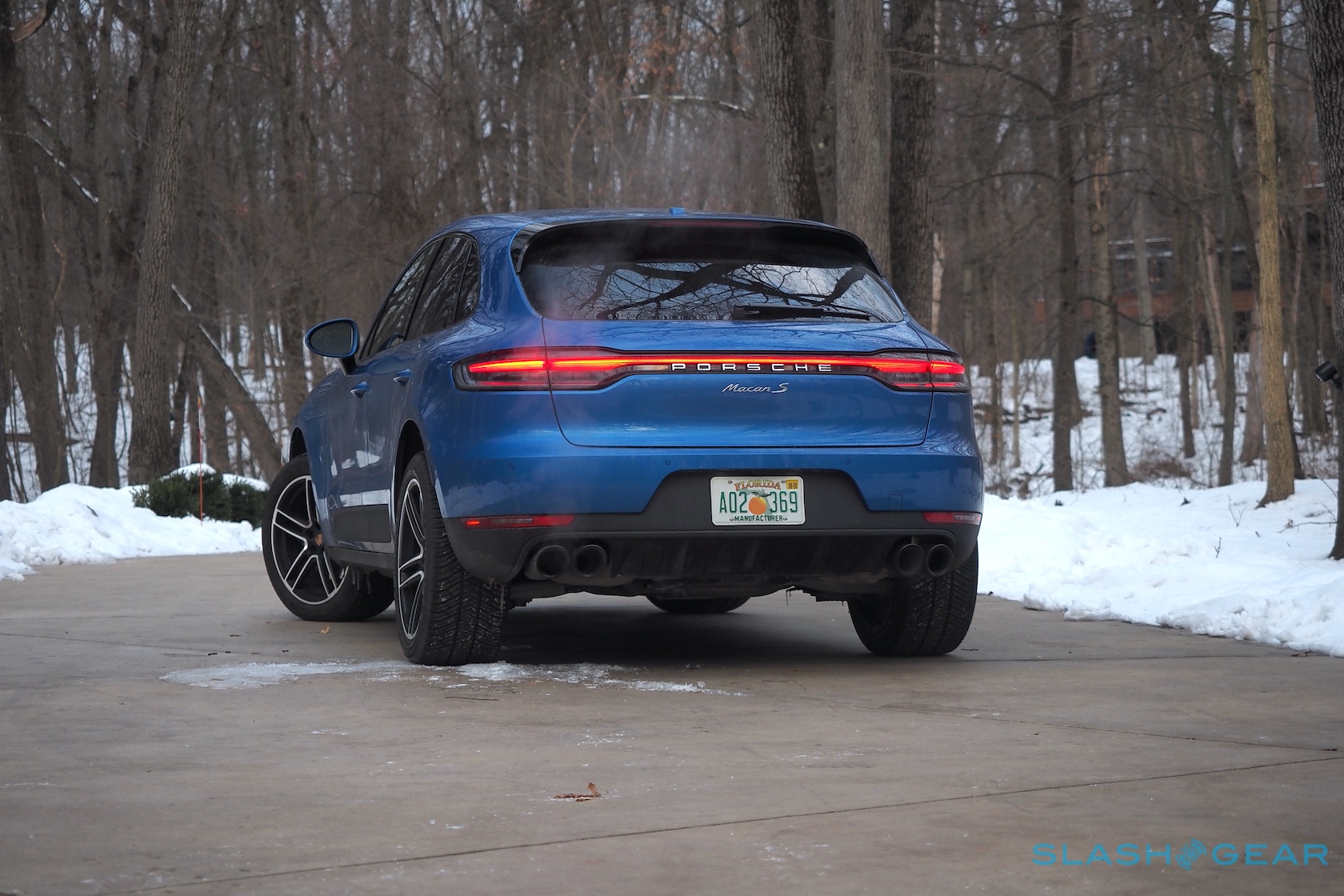 There’s still a compromise to be made for the Porsche aesthetic, and if cargo space and rear seat headroom are your primary concerns then the Macan S’ sloping roofline may be a problem. That’s not to say it’s particularly cramped inside, though figure on it being ample for four adults rather than five. The middle rear seat is tight, and there’s just 17.6 cubic feet of trunk to play with.

The big news for the Macan S is under the hood. Gone is the old twin-turbo V6, replaced by a new 3.0-liter V6 with a single turbocharger. You might assume that’s going to mean a cut in power, but actually the converse is true. Horsepower rises, to 348 hp, while torque climbs to 352 lb-ft. 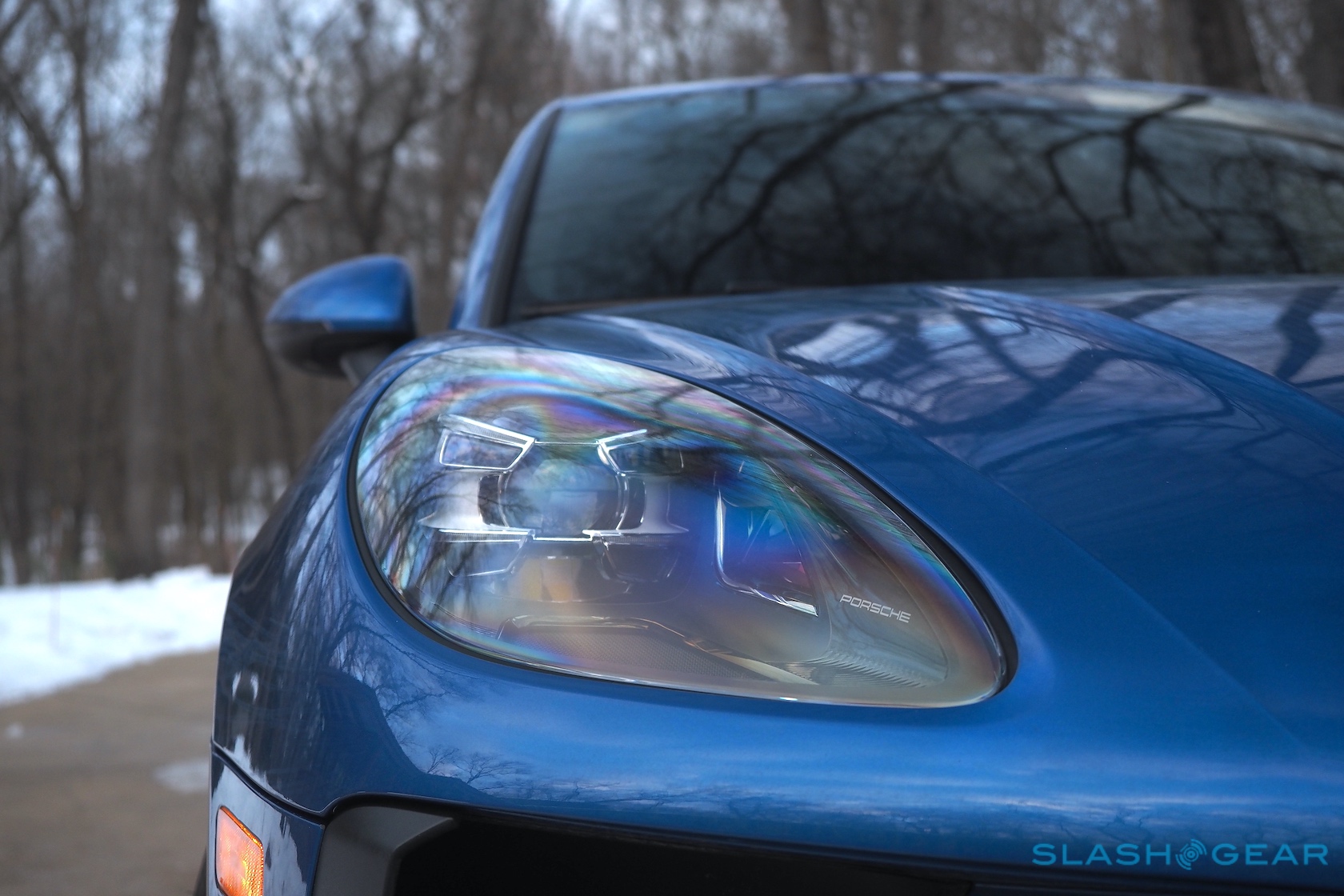 Maybe more important, halving the number of turbos onboard helps with overall lag. With just one to squeeze in, Porsche can slot it into the “V,” neatly between the cylinders of the engine. The more compact layout cuts that pause between you putting your foot down and the engine spooling up in response.

Maximum torque arrives a little earlier than in the old car, then, from 1,360 rpm. Combined with a swift-shifting 7-speed PDK transmission and permanent all-wheel drive, and the Macan S is no slow-poke. 0-60 mph arrives in 5.1 seconds, unless of course you’ve checked off the $1,360 Sport Chrono Package, in which case that drops to 4.9 seconds. That’s only two-hundredths of a second slower than a Macan GTS. 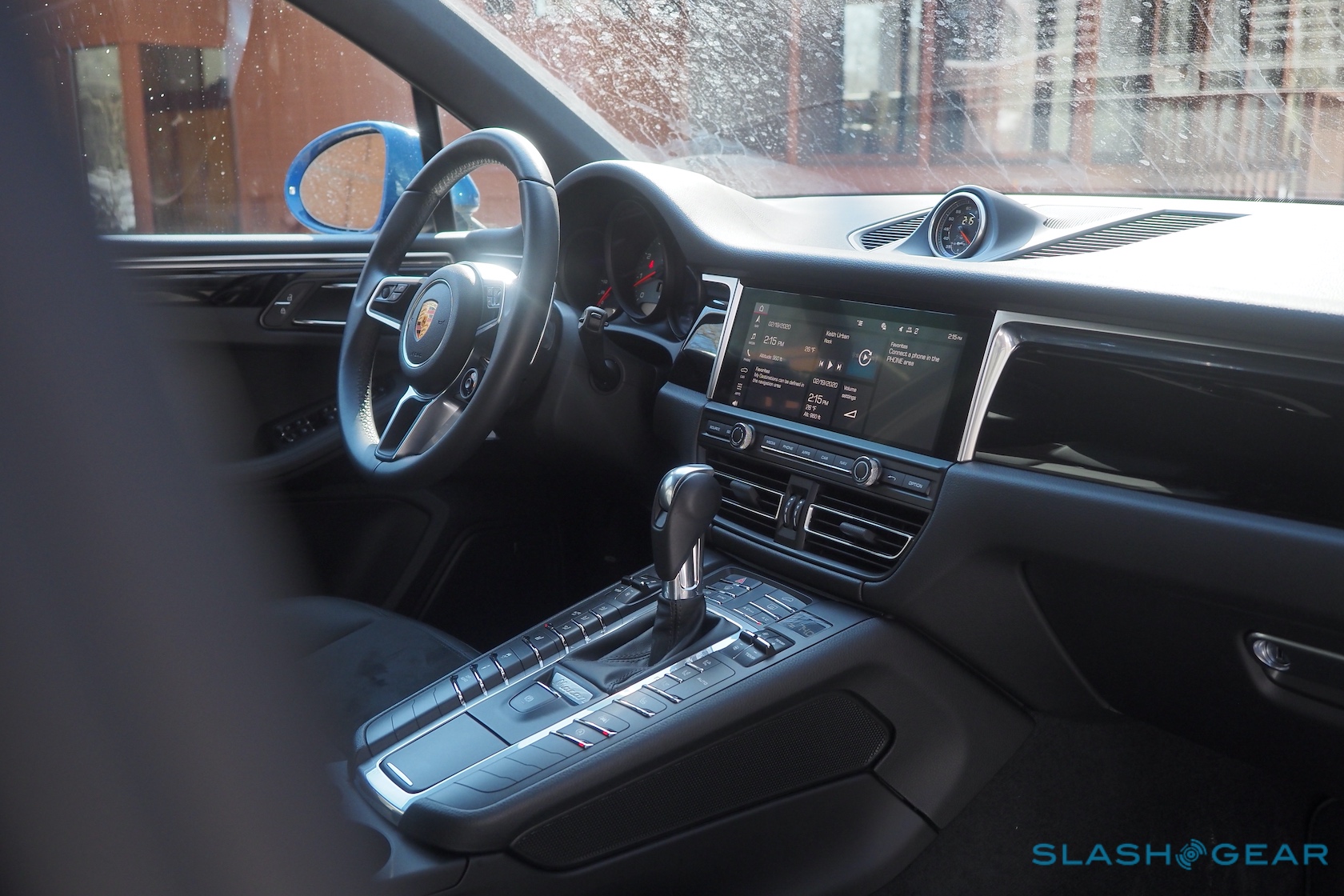 It’s not just the speed you notice, it’s how well the crossover drives. Probably first among the concerns of Porsche purists, back when the automaker announced it was getting into SUVs, was that the dynamics of its coupes could never translate to bigger, plusher cars with seating for five. Over the years that fear has been shown to be groundless, but the Macan S does that better than most.

Admittedly, my test car had the $1,360 Porsche Adaptive Suspension Management (PASM) system, which can adjust the damping stiffness according to your drive mode. I’d say it’s a must-have upgrade, though, for how it leaves the Macan S planted and flat through the corners. Ignore the higher driving position (and probably best to leave the kids and dogs back home) and you could fool yourself into thinking you were in a Cayman, or near enough. 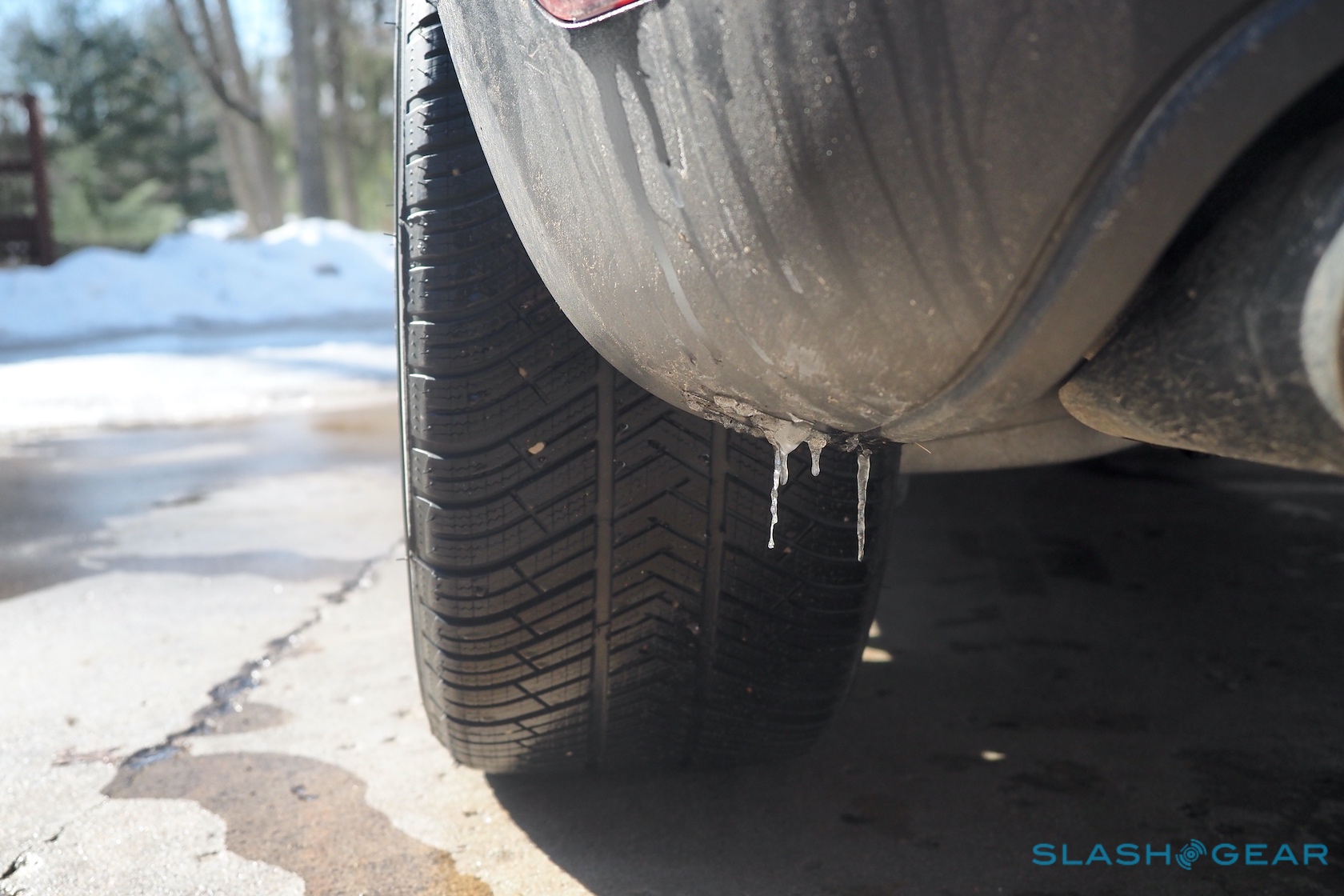 It’s just fun, in a way that most crossovers of its ilk singularly fail to capture. In Sport or Sport+ modes, the PDK transmission doesn’t hold back when it comes to kicking down. Hitting the button in the center of the steering wheel’s neatly placed drive mode knob – which comes as part of the Sport Chrono Package – unlocks the maximum performance settings for 20 seconds, just enough time to take advantage of an overtaking opportunity, or just to whip around corners when a road gets unexpectedly rewarding.

Porsche has figured out that deceptively simple equation for rewarding the driver, but the Macan S’ dashboard could do with a lesson in the same. The black standard interior is dark and sober, while the high center console is studded with a whole lot of buttons. Figure on it taking a while before muscle memory kicks in and you don’t have to look down from the road. 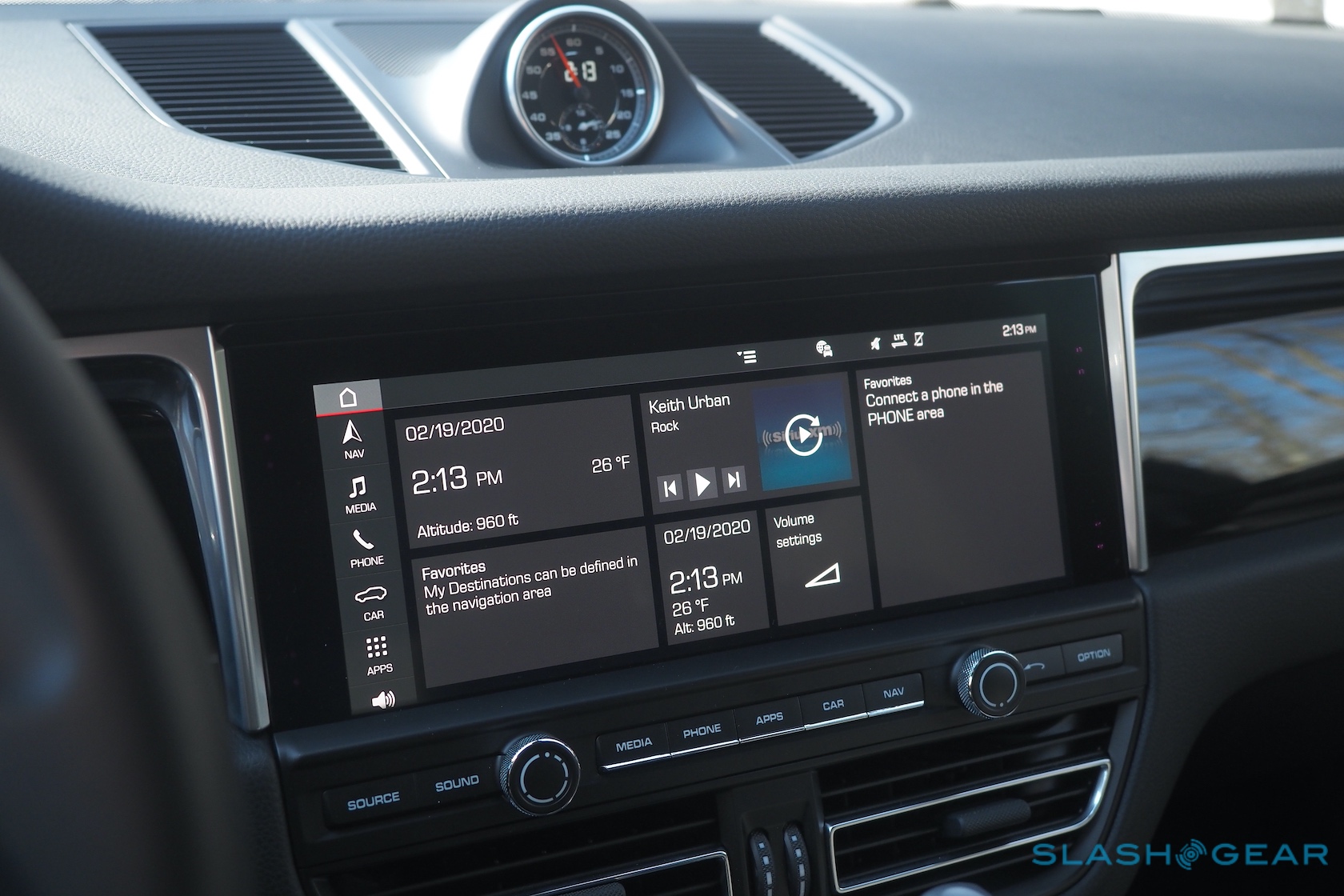 Rising above all that – figuratively and literally – is Porsche’s new PCM infotainment system, with a broad 10.9-inch touchscreen atop a row of shortcut keys. It looks a little complex at first, but you can pull your most commonly-used features as variable-size widgets to the home screen. It’s fast and responsive, not to mention supports Apple CarPlay (though not Android Auto, and not wirelessly) as part of the $3,110 Premium Package. That adds toasty seat warmers front and rear, along with LED headlamps and auto-dimming mirrors. Or, you can have CarPlay on its own for $360.

Pricing is where the Macan S charm may start to fade for you. In theory it starts at $58,600 (plus $1,250 destination). In practice, however, Porsche’s aggressive options list means it’s all too easy for that number to spiral upward. With its sports tailpipes, heated steering wheel, 20-inch wheels, and Sapphire Blue metallic paint, plus things like the Sport Chrono Package, the final price clocked in at $70,990. 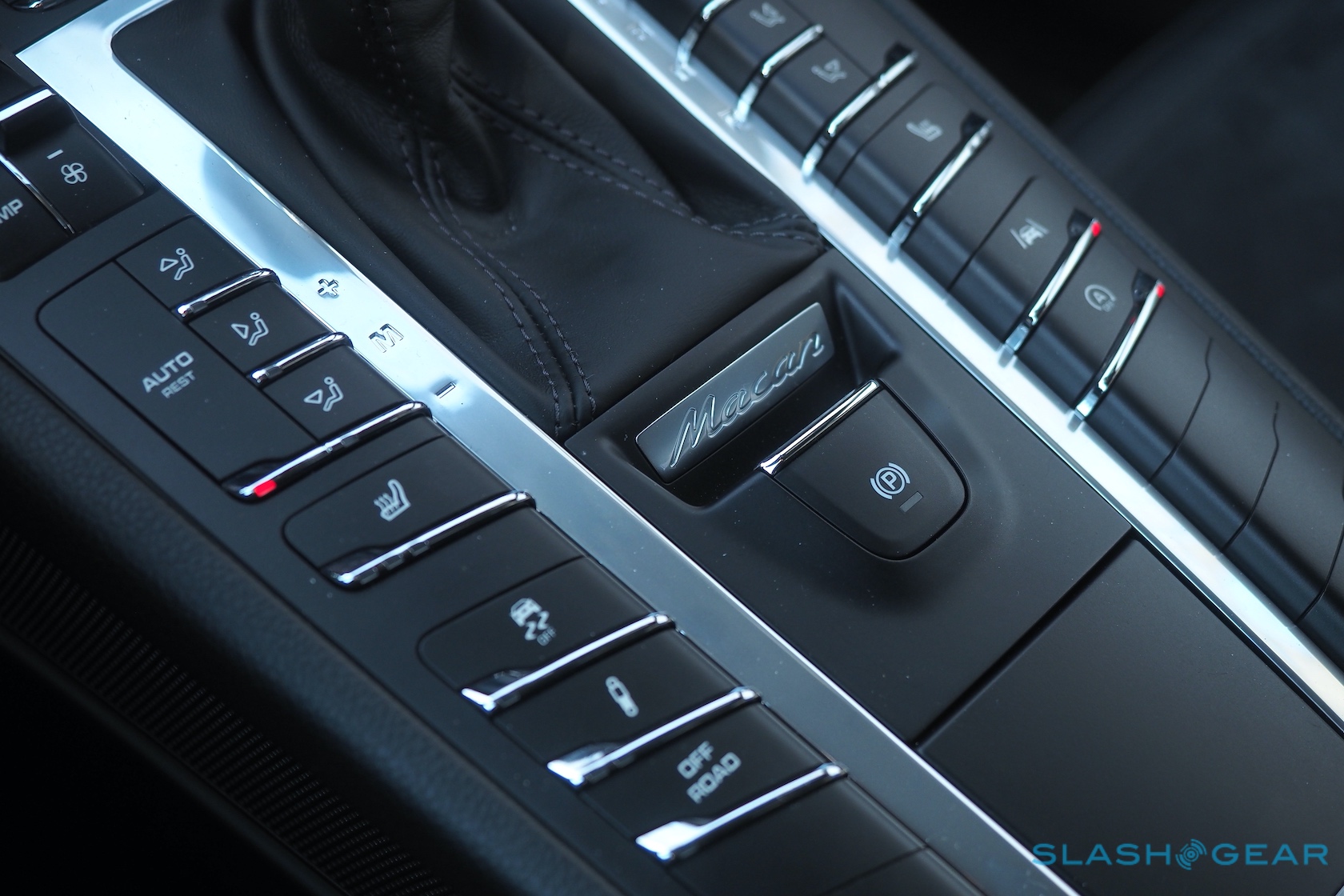 Even then, that’s showing some restraint. Porsche offers an excellent air suspension system for $2,750, an active exhaust for $2,930, and a Premium Package Plus that, for $6,230, throws in front seat ventilation, a panoramic roof, Bose Surround Sound, and keyless entry and start to the regular Premium Package. There’s a vast list of interior trim options, up to and including espresso-colored natural leather for $4,920 and $3,200 for personalized illuminated carbon fiber door sill guards. 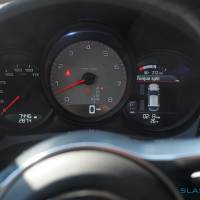 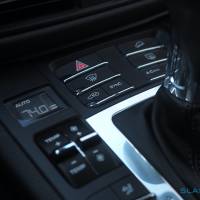 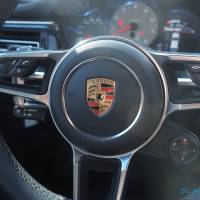 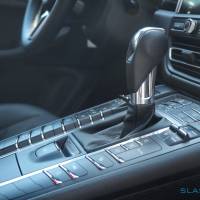 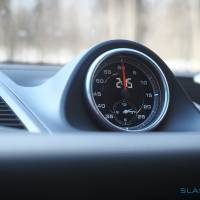 Self-control, or as much as you can muster, is your friend. I’d keep the standard interior but add the Sport Chrono Package, plus the Premium Package and the PASM dampers. The standard 19-inch wheels would give the Macan S a smudge more compliance on unruly asphalt which I suspect passengers would appreciate, while my bank balance would enjoy saving the $3,140 Porsche asks for the optional 20-inchers. 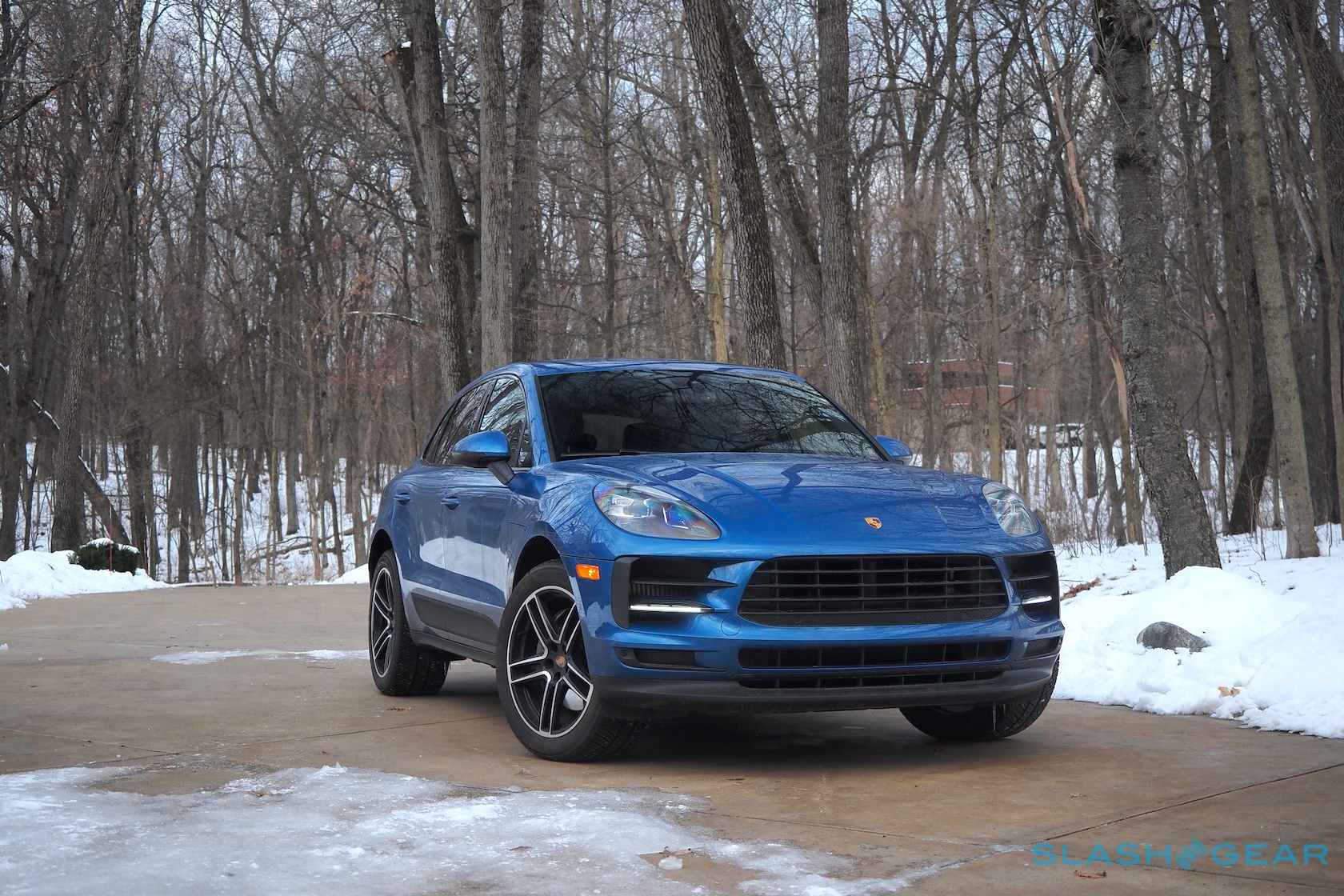 I suspect anybody walking through the doors of their nearest Porsche dealer is fully aware that their wallet is about to take a battering, and I’m not sure they care. You don’t pick a Macan because it’s the cheapest crossover, or the most practical; there’s an expectation that you pay for the privilege of driving something fundamentally more rewarding than the rest of the small SUVs out there.

In among that range of models, and those long options lists, I think the Macan S represents the sweet spot. Powerful enough, engaging enough, affordable enough, and just plain fun enough. There’s a very good reason that Porsche’s is the sports crossover to beat.