Pope Benedict XVI has sent his first tweet, the first time the head of the Catholic Church has waded into the waters of 140-character social networking, and blessing all 675,000+ of his English-language followers. The first message followed a high-profile run up to the Twitter debut, with the Pontiff’s plans to expand his social media footprint revealed last week.

“Dear friends, I am pleased to get in touch with you through Twitter. Thank you for your generous response. I bless all of you from my heart” Pope Benedict XVI

Currently, the Vatican is using the @Pontifex account as a broadcast medium, not one necessarily for discussion. There are eight accounts, catering for eight different languages, and so far each only follows the other seven.

According to the BBC, the Pope won’t be writing each of the messages sent out of the eight different accounts. Instead, he will “sign off” on each message; the Vatican released an image of him supposedly hitting “Tweet” on an iPad earlier. 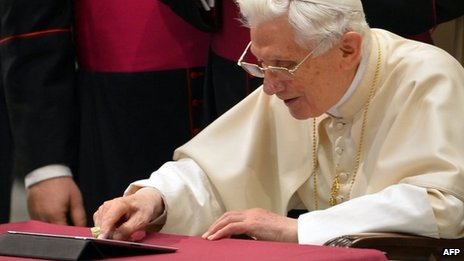 Later today, according to the Washington Post, the Pope will “respond to a few messages” via Twitter.