After 20 years of the pop-up ad ruining the day of internet-goers around the world, the original developer of said code has apologized. Finally. He made clear that his original intentions were good – separating a banner ad from the page that was profiting from it. But things went sour quickly.

It was between the years 1994 and 1999, says writer Ethan Zuckerman, writer of the original pop-up ad code. Back then, it was still a Wild West of internet advertising. Zuckerman (not to be confused with “Zuckerberg”) worked for Tripod dot com, readying content and services for “recent college graduates.” Once that didn’t work, they tried every business model under the sun, including advertising.

The situation which brought about the pop-up ad was one of shock. A major car company (he doesn’t say which), purchased ad space on a webpage that (unbeknownst to them at the time) celebrated the rear ends of humans. 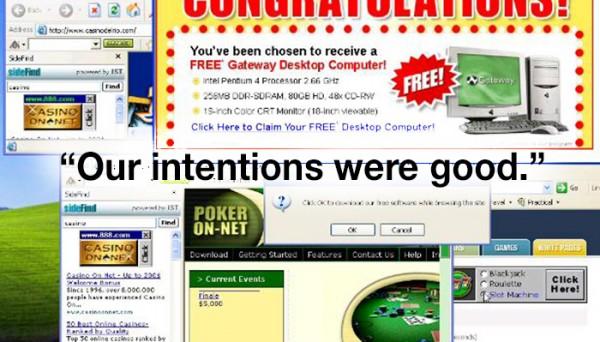 Instead of pulling the ad entirely, Zuckerman wrote a code that would launch a new window which would then run the ad inside – separate from the content.

Zuckerman wrote an extended account of his days in internet development for The Atlantic this week. He goes on to note how Geocities went on to use his code when they started using pop-up ads for themselves. It all went downhill from there.

Can you imagine a world without intrusive advertisements on the internet?

We only wish it were so simple.