Sphero really made headlines when it revealed the mini BB-8, a smartphone controlled miniature version of what will be the next lovable mascot of Star Wars: The Force Awakens. Immediately, the small rolling droid endeared itself to many, especially considering it was made available on #ForceFriday. But as cute and lovable as the BB-8 maybe, inquisitive minds can’t but help try to pry into the small robot and see how it works. Yes, the BB-8 just got a teardown and it’s not for the faint of heart.

Unlike your conventional smartphone or gadget teardown, the BB-8 wasn’t made for being opened up. Only a tightly sealed seam connected the two halves of the ball. No screws. Meaning that to get to the insides of the BB-8, you’re really have to break open its durable plastic shell. Long story short, it’s a one way trip. All for the sake of science! 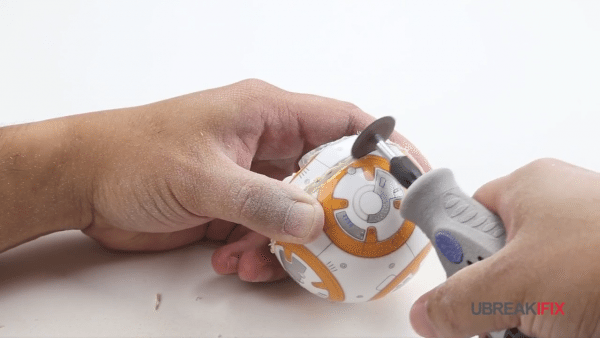 Sphero is, of course, no stranger to rolling robot balls, as its main product line is basically made up of such robots. The very same principles and even the same mechanisms could be found in this BB-8. There is a gyroscope that tells it which way is up or down and two wheels that rolls the ball around. There is a counterweight that will always keep the mechanism upright no matter which way it rolls. And, as expected, a strong magnet keeps the head from falling off.

So yeah, no repairability index for this one, though we’d guess it’d score a low 1 out of 10 considering how much the rotary tool was needed to break it open.

Check out our review of the Sphero BB-8 for more fun facts and details.

The BB-8 is now available for purchase for $149.99. The robot can be controlled from an iPad, iPhone or Android device.