In the last week of 2018 on into the first of 2019, the polar vortex above the Arctic split, from one whirling beast into three. As a result of this disruption, this year’s cold season may be one of the coldest we’ve seen in many a year. According to meteorologists watching the system, persistent and acute cold is likely to begin at around the end of this month, January of 2019.

The polar vortex spins around our north and south poles, creating somewhat of a wall of wind around arctic, chilly air. This January, the polar vortex split, and air that’d normally be trapped in this area at our North Pole kind of, sort of spilled out. That’s the simplest way to explain it.

According to the Japanese Meteorological Agency, this event was a “Major” sudden stratospheric warming events. A stratospheric sudden warming is defined by the Tokyo Meteorological Agency as “a phenomenon characterized by a rapid increase in polar temperatures in the stratosphere.” The TMA describes a Major Warming as an event where “the zonal mean temperature increases poleward from 60 degrees latitude and the net zonal mean zonal winds become easterly at 60 degrees latitude at 10 hPa (32 km) or below.” Below you’ll see an animation of the split created by meteorologist Simon Lee.

The current major #SSW is likely now at maximum intensity, using the 10 hPa 60°N zonal wind metric. So how did we get here? Here's an animation of GFS 00Z analyses & T+12 forecasts from Dec 18th – Jan 10th. pic.twitter.com/IgkqoXMlwM

While January’s been especially warm this year, it’s quite likely we’ll feel a nip in the air within a week or a week and a half. Below you’ll see a forecast from NOAA/CPC. 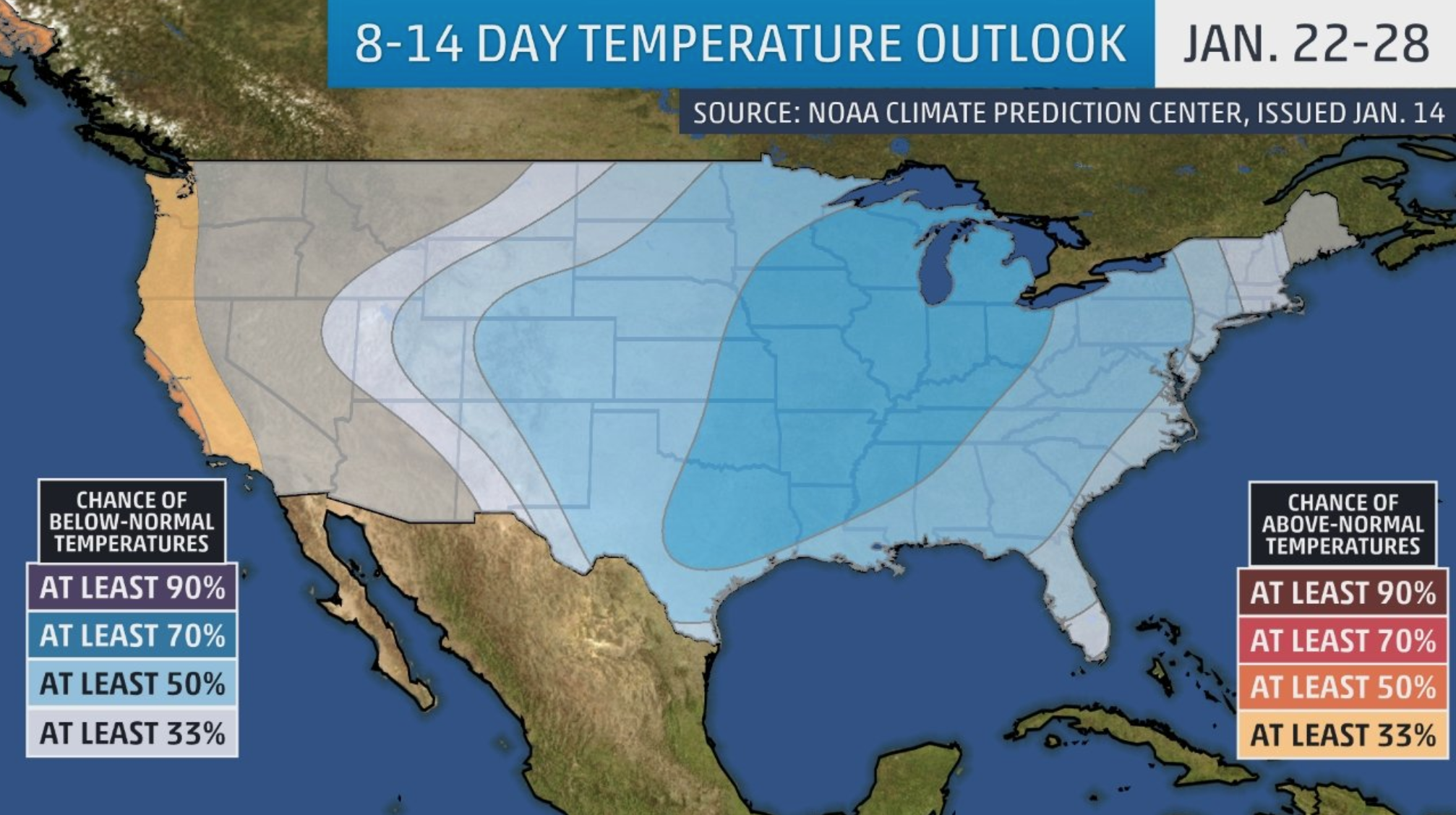 Reports suggest that the effects of a SSW like we saw at the turn of the year can last 4-8 weeks as systems move from the stratosphere downward, toward our soon-to-be-frigid faces. Children of the vortex are coming for us all! Hashtag Winter is Coming.

Looks like the party is finally over. GFS predicting #PolarVortex (PV) at long last to recover from the split that lasted a full month! But it's when the PV recovers that the circulation anomalies associated with the PV split are fully realized in the troposphere #WinterIsComing pic.twitter.com/SSpEoSeTFf

The above message comes from Judah L Cohen, Director of Seasonal Forecasting at AER Atmospheric and Environmental Research.