Pokemon GO Thanksgiving event is tiny, but more is coming

This Thanksgiving in Pokemon GO, Niantic’s announced that users will have the opportunity to earn rewards. Last year’s Thankgiving event, bonuses where given to all those players walking and catching Pokemon during the holiday where exercise is needed the most. This year Niantic decided that users need to exercise an extreme amount just to – possibly – maybe – EARN those rewards, the hard way.

Last year’s Thanksgiving event, bonuses were activated automatically. Users got the opportunity to get 2x XP (experience points) and 2x Stardust. That included everything, including Lucky Eggs – which therefore quadrupled the amount of bonus gained.

Last year’s event wasn’t centered on Thanksgiving as a holiday. Instead, it was called “Pokemon GO Celebration,” and it was one of the first Pokemon GO events in the history of the game. The first was during Halloween of 2016, a Halloween which would shape Pokemon GO forevermore.

The chart below should give you a good idea of what’s at stake here in 2017, during Thanksgiving week. The number of catches you see in the chart does not JUST mean that YOU will have to catch that many Pokemon – it’s a global capture total. The timing for this event is now, Monday, until the 26th. That’s 6 days total. 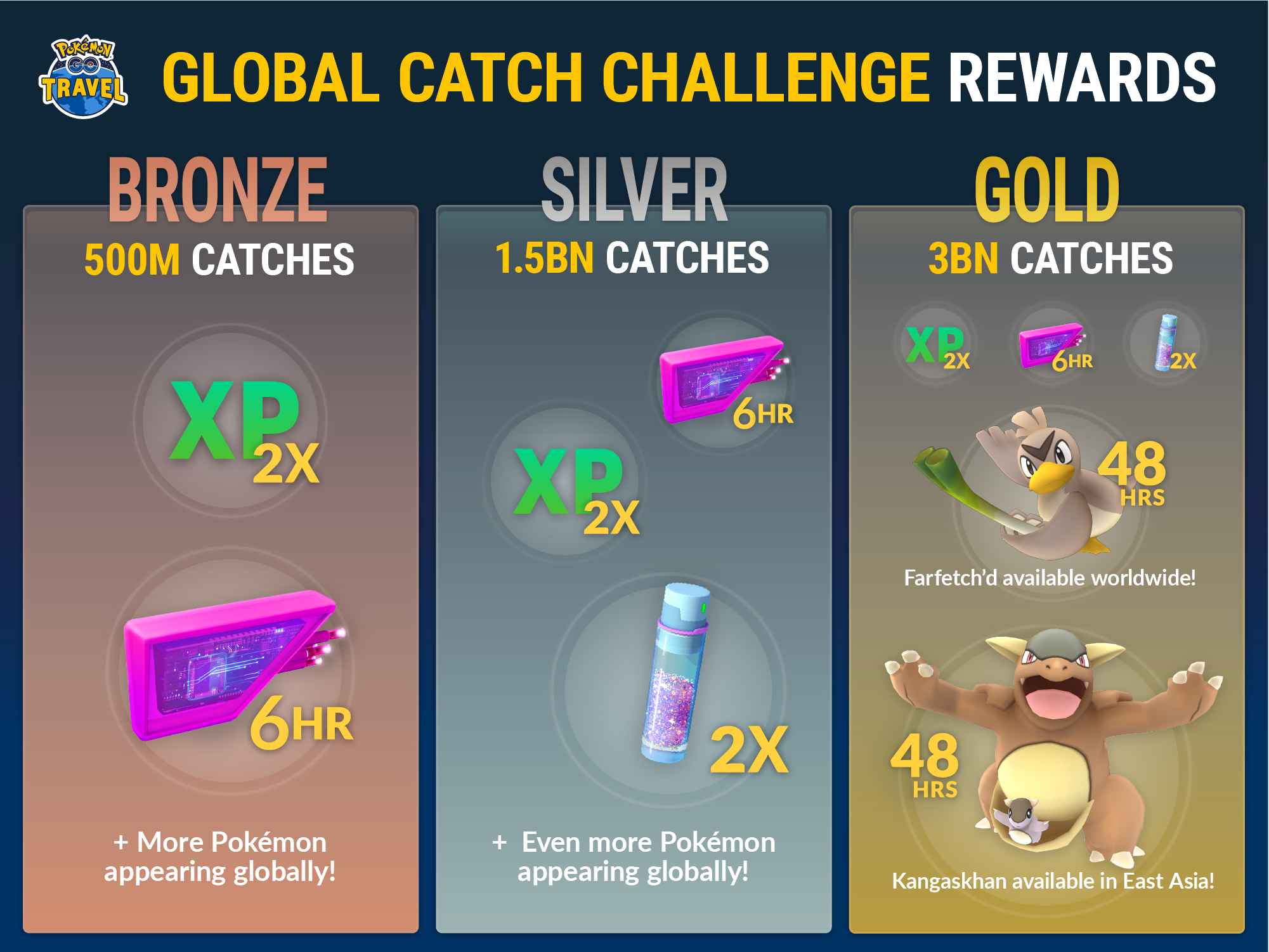 The “More Pokemon appear globally” bit might seem a tiny bit ambiguous – does it mean more of the Pokemon already in the game, or more as in NEW? We’ve confirmed this morning that this mention means the former – more Pokemon will appear in the game (but they won’t be new types). This should make the second and third tier more realistic.

Just 500M catches shouldn’t be a massive undertaking to complete – for several days of play. Once that’s achieved, we’ll be right on top of Thanksgiving, and there’ll be a whole lot of people playing (in the USA, anyway), since they’re on holiday. More Pokemon appearing globally means easier catches.

If the universe of Pokemon GO somehow attains 3-BILLION Pokemon in the allotted time, a couple of rare Pokemon will be released in larger amounts in regions never before available. Farfetch’d is usually only in and around the UK, while Kangaskhan is usually only available in Australia. In other words – a big meh, on that. The real treasure is in the DUST.

BUT, there’s an additional set of details incoming. Niantic’s confirmed with Reddit’s Silph Road community the following: “We still have more information to share about upcoming feature changes, but it may be a few more days. Stay tuned.”

Based on the rarity of the Pokemon that could potentially be released, it wouldn’t be a shocker to find a first trial of TRADING going on. Of important note: That’s an educated guess. We don’t have any insider information on this particular update, but we’ll known soon!

UPDATE: Niantic’s shared a couple clarifications for this event. They are as follows, straight from Niantic’s PR rep IndiGO:

• The Global Catch challenge starts now. Good luck on your adventures, Trainers!
• Rewards are unlocked shortly after reaching each milestone and will last until December 1, 2017 (Farfetch’d globally and Kangaskhan in East Asia will appear for 48 hours upon achieving the 3 billion Pokémon caught milestone).