Pokemon GO Stickers, and why you want them

Today we’re exploring some future action when it comes to Pokemon GO stickers with insider info on how Niantic will handle said assets in the game in the near future. This game is an evolving piece of work – it’s very different now from what it was when it started. With the release of “stickers” in Pokemon GO, we’ve got the first implementation of an element that not only does not have any affect on the rest of the game, but also disappears once used. All that will (quite likely) change in the very near future.

Pokemon has survived and thrived as a media empire over the past decade and a half because its central objective is collecting. The collector in all of us wishes to fulfill the objective set by the game’s creators – “Gotta Catch Em All!” With Pokemon GO stickers, that’s just not possible.

Due in a BIG way to the comments posted on social media and sent directly to Niantic, a change seems to be in the making. Insider sources with information on the subject who wish to remain anonymous made clear this week that Pokemon GO Stickers may not only become part of a secondary game within a game, they could be delivered by Niantic in real, physical form in the future.

Pokemon GO is currently thriving thanks to its ability to connect users around the world without the burdon of leaving one’s own home. This is very important at the moment due to quarantine restrictions (thanks to our current global pandemic). It’s also important because not all users live in rural areas packed with Pokemon.

The first iteration of stickers were simple. You got some stickers for free in the game, you attached them to “gifts” that were sent to friends in the game, and they’d disappear. Niantic also sold stickers in their in-game store.

The “disappear” bit will very likely change in the near future according to our sources. Niantic has discussed the possibility of a long-term collection system for stickers, not unlike the game’s already in-place system for rewards / metals for accomplishments.

The idea that Niantic would print these stickers and distribute them to users isn’t as finalized as the in-game collection system at this time. It’s not clear how this system would work, exactly, especially since we are, again, in the middle of a pandemic. But the possibility remains. 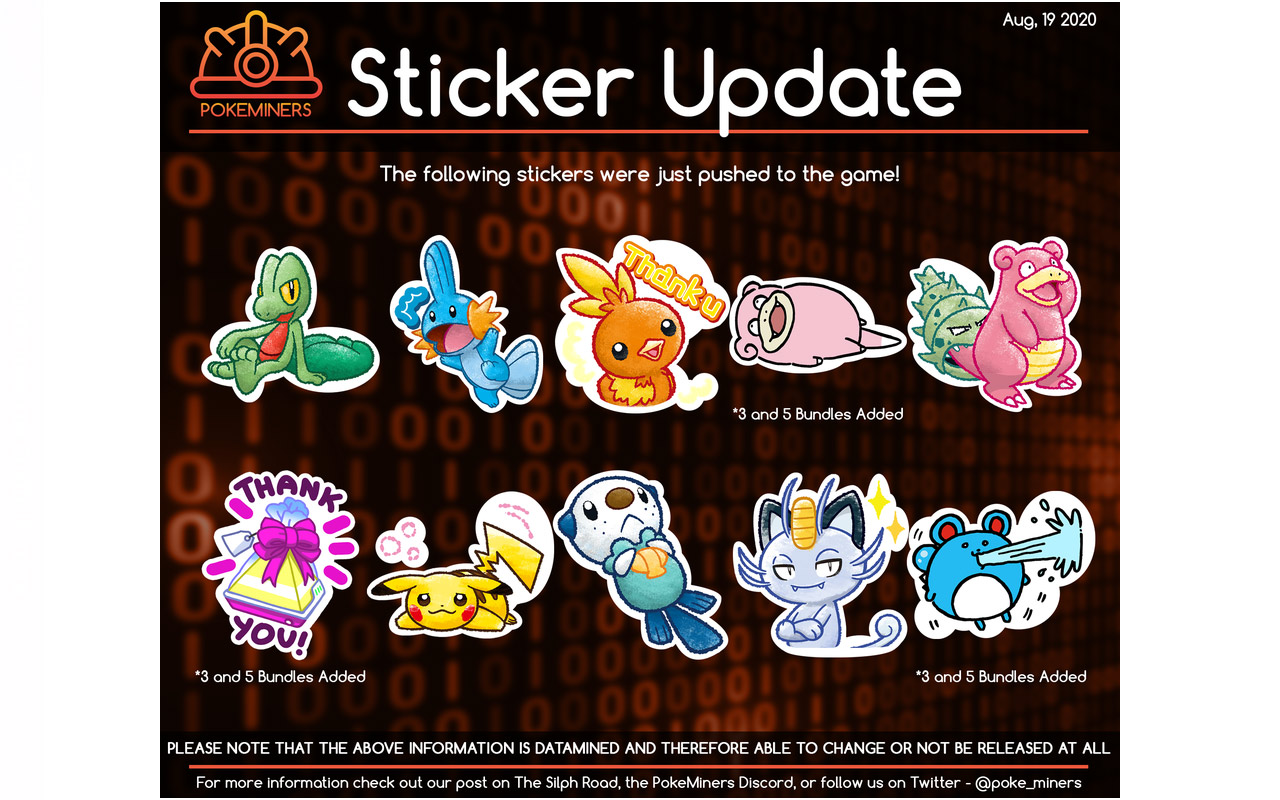 UPDATE: Dataminers with the Pokeminers crew have discovered a new set of Pokemon stickers in the game’s code. We’ll be seeing these stickers appear in-game very soon – like this week!