At long last, Pokemon Bank has been updated to add compatibility with Pokemon Sun and Moon. This compatibility has been a long time coming, and now veteran Pokemon masters will be able to transfer their Pokemon to Sun and Moon from previous games. Even more exciting is the fact that this update allows you to transfer Pokemon from the eShop releases of Red, Blue, and Yellow, marking the first time that we’ve been able to move Pokemon from first generation titles into current games.

In order to do that, though, you’ll need to download the Pokemon Transporter app in addition to Pokemon Bank. Pokemon Transporter was originally intended to transfer Pokemon from older games like Black and White to the Pokemon Bank, allowing you to then move them into newer games like Omega Ruby and Alpha Sapphire. The infographic posted below breaks down the process of transferring Pokemon from all currently compatible games.

In addition to letting players easily move Pokemon between games, Pokemon Bank also serves as storage for unused monsters. You can store up to 3,000 Pokemon in the Bank, letting you build quite the roster of monsters. That kind of functionality comes with a price, but at $4.99 per year, it’s a cost that most Pokemon veterans are okay with paying. 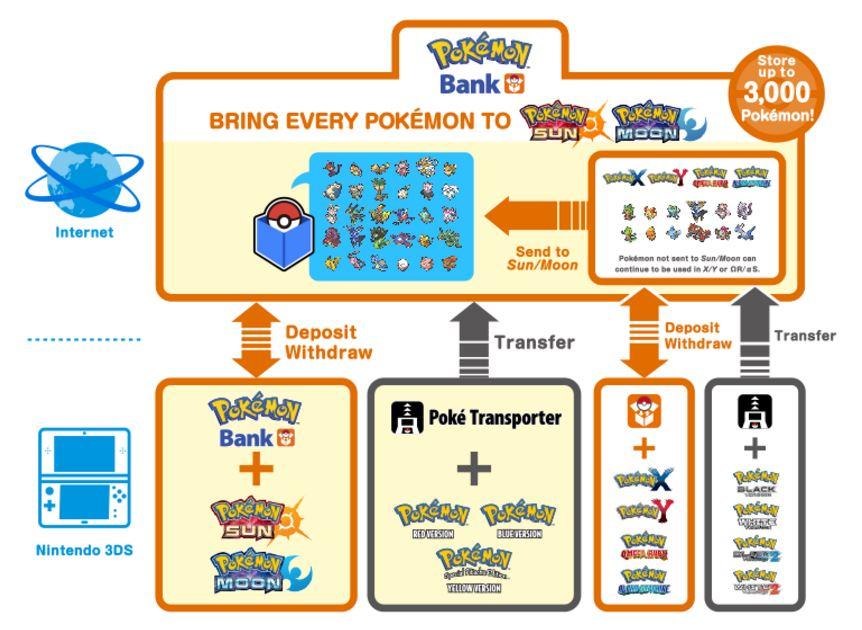 In celebration of Pokemon Bank support for Sun and Moon, Nintendo is giving away Mewnium-Z to everyone who uses Pokemon Bank between now and October 2nd. Mewnium-Z lets the mythical Pokemon Mew use its Z-Move, which is called Genesis Supernova. It’s a nice little bonus to get, especially if your goal is to collect all of the available Z-Crystals for Sun and Moon.

Finally, this update adds a National Pokedex feature to Pokemon Bank. Now the Pokemon Bank app will scan any games you connect to it, keeping a record of all of the Pokemon you’ve caught across X and Y, Omega Ruby and Alpha Sapphire, and Sun and Moon. The update is live now, so if you’ve been itching to move your old Pokemon into Sun and Moon, now’s your chance.