Pluto probably wouldn’t be your first choice for a beach holiday, but even if you could get to the distant dwarf planet, recent findings of the New Horizons probe suggest the sand might not be what you’d expect. With a surface temperature of around -230 degrees Celsius, the individual grains may look like Earth sand, but they’re made of something very different.

That’s because they’re actually frozen gases, rather than silica. Given Pluto’s temperatures, a research team led Plymouth University using images sent back by New Horizons in 2015 figured out that they’re likely to be solidified methane gas. Their findings, “Dunes on Pluto, have been published in Science. 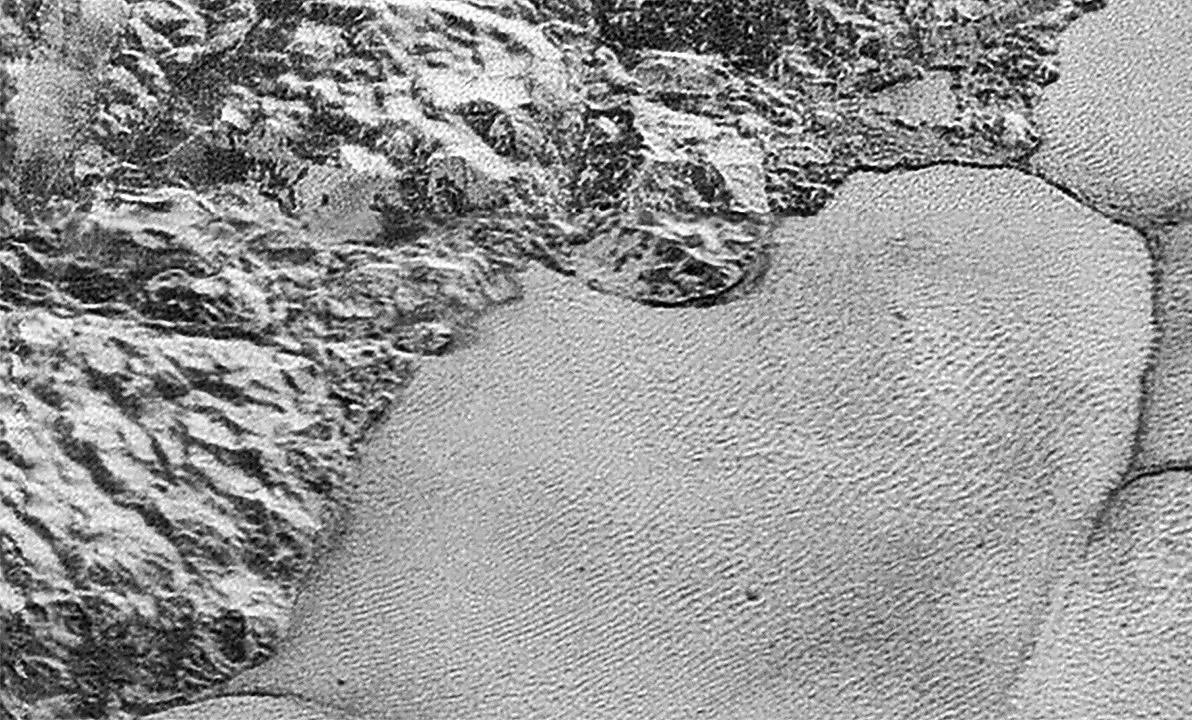 Initially, given Pluto’s size, exceedingly thin atmosphere, and solid gases, experts weren’t expecting to find dunes as you might on Earth. Winds are relatively slow, at most 25 mph on average. Photos of the area between the boundary of the Sputnik Planitia ice plain and one of Pluto’s mountain ranges, however, proved those expectations wrong. Indeed, a series of striated dunes were caught on camera, in an area less than 47 miles across.

“When we first saw the New Horizons images, we thought instantly that these were dunes but it was really surprising because we know there is not much of an atmosphere,” Dr Jani Radebaugh, Associate Professor in the Department of Geological Sciences at Brigham Young University which collaborated on the research, said of the findings. “However despite being 30 times further away from the sun as the Earth, it turns out Pluto still has Earth-like characteristics. We have been focusing on what’s close to us, but there’s a wealth of information in the distant reaches of the solar system too.”

Though the winds may be relatively slow, the nature of the terrain has contributed to the formation of the dunes, the researchers argue. The mountain slopes would help funnel the winds down, and while that still wouldn’t likely to be sufficiently strong to actually pick the methane sand grains up, it would be enough to carry them once airborne. To actually get the sand up, there’s another theory.

That’s sublimation, with temperature gradients created by solar radiation affecting the granular ice layer. That can be enough to effectively percolate energy up through the layers, and propel sand up into the winds. Once that happens, Dr Eric Parteli, Lecturer in Computational Geosciences at the University of Cologne points out, Pluto’s low atmospheric pressure makes the rest more straightforward.

“On Earth, you need a certain strength of wind to release sand particles into the air, but winds that are 20% weaker are then sufficient to maintain transport,” he says. “The considerably lower gravity of Pluto, and the extremely low atmospheric pressure, means the winds needed to maintain sediment transport can be 50 times lower.”

The researchers believe that, in geological terms at least, the dunes formed on Pluto are fairly recent. Based on the fact that the morphology of the dunes is undisturbed, among other factors, the estimate is that they were formed within the last 500,000 years, “and possibly much more recently,” the team says. Next up will come more computer simulations to better model how Pluto’s unique conditions affect its strange geology.