According to George, Nike and PlayStation designers, including the designer behind the PlayStation 5 console design, Yujin Morisawa, worked closely together to bring the collaboration to life. Plenty of pictures have been offered of the special colorway, along with some of the details that might go unnoticed if you don’t look closely.

George says the tongues of the shoes have the PG and PlayStation logos, just like his PlayStation collaborations. Shoe colors are black, white, and blue and were heavily inspired by the industrial design of the PlayStation 5 console. The sneakers do feature PlayStation 5 references on the sock liner and outsoles.

George says for the sneakers to be a true collaboration with PlayStation, they had to include the iconic PlayStation shapes. Those shapes can be spotted on each shoe in the same pattern as on the DualSense wireless controller. Each pair of the special shoes also comes with a hangtag that celebrates the continued partnership between George and PlayStation. 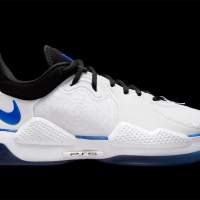 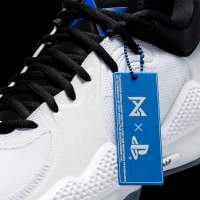 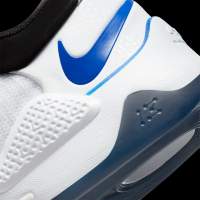 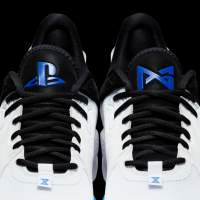 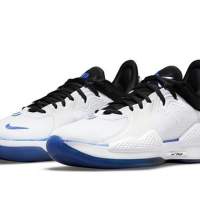 George’s unique PG 5 PlayStation 5 colorway sneaker will launch in select regions starting May 14, 2021. There’s no indication of exactly which regions the shoes will launch in or how much they will cost at this time. Fans wanting to get their hands on a pair can download the Nike SNKRS app and check their local Nike website for more details on availability.