In addition to taking the easy path up Mount Everest, this week at CES brought the opportunity to play Epic Games’ Bullet Train demo for Oculus Rift. If you were to simply watch the trailer for the game, Bullet Train offers little of interest — it is, after all, just another game where the player grabs a gun and starts shooting. The hook, though, lies in its’ platform: Oculus Rift, the hotly anticipated VR headset now up for pre-order. With the headset on, everything about FPS gaming changes.

Bullet Train is a cleverly titled game in which one is on a train going to a terminal where there will be many, many bullets. Some of which the player can pluck out of the air with their hand and throw back. Gamers are given a brief tutorial on how to pick up and fire guns, transport from one location to another, and look around. Unreal Engine has shown off the gameplay in the video below.

Getting setup was the same as with other VR games: I was given a pair of controllers, one for each hand, and then fitted with the Oculus Rift, which unlike the HTC Vive includes a pair of built-in ear speakers (it wouldn’t be quite accurate to call them headphones). As well, this game is one that could be played sitting down on a swivel chair, as there’s no need to walk. It only takes a minute or so to get it all setup. 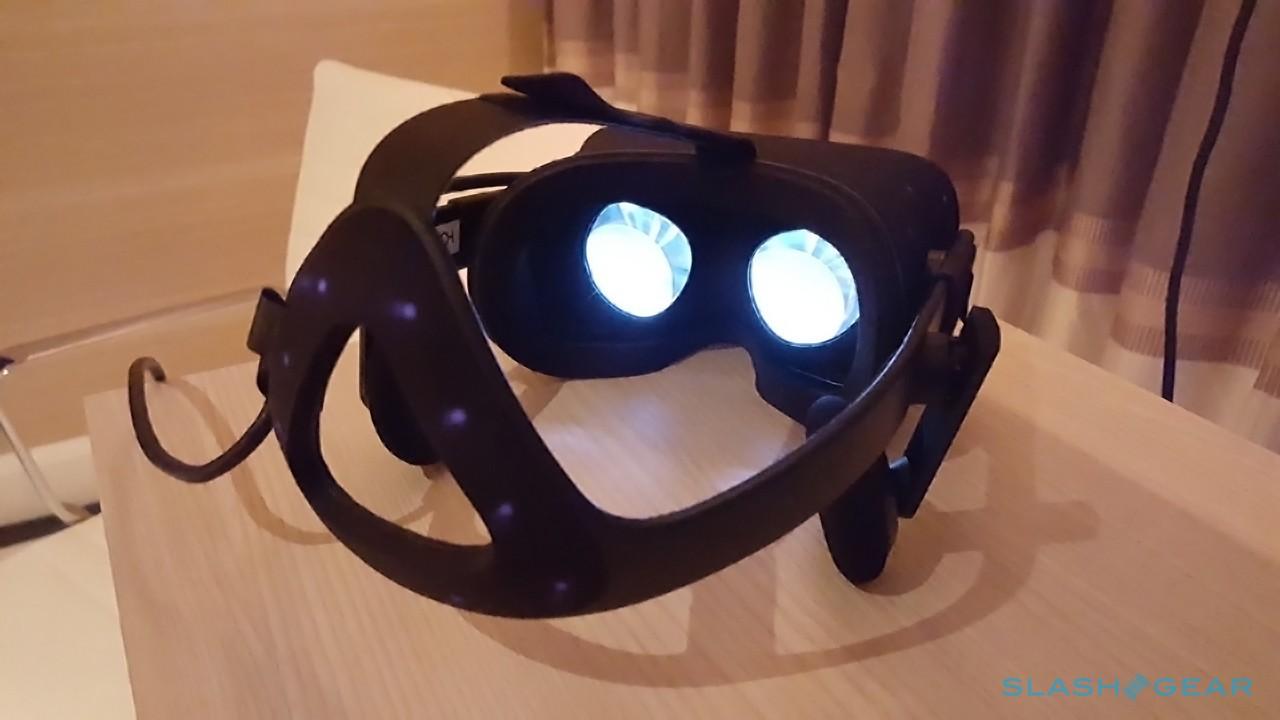 A moment later, the game blinked to life and the world around me fizzled away, replaced by the interior of a train zooming down a dark tunnel. A voice explained how to use the controllers which were rendered as hands in the game. When I moved my hands, the game’s simulated hands moved to match. This included my fingers; when I lifted my thumb off its’ button, for example, my in-game simulated thumb moved to match. 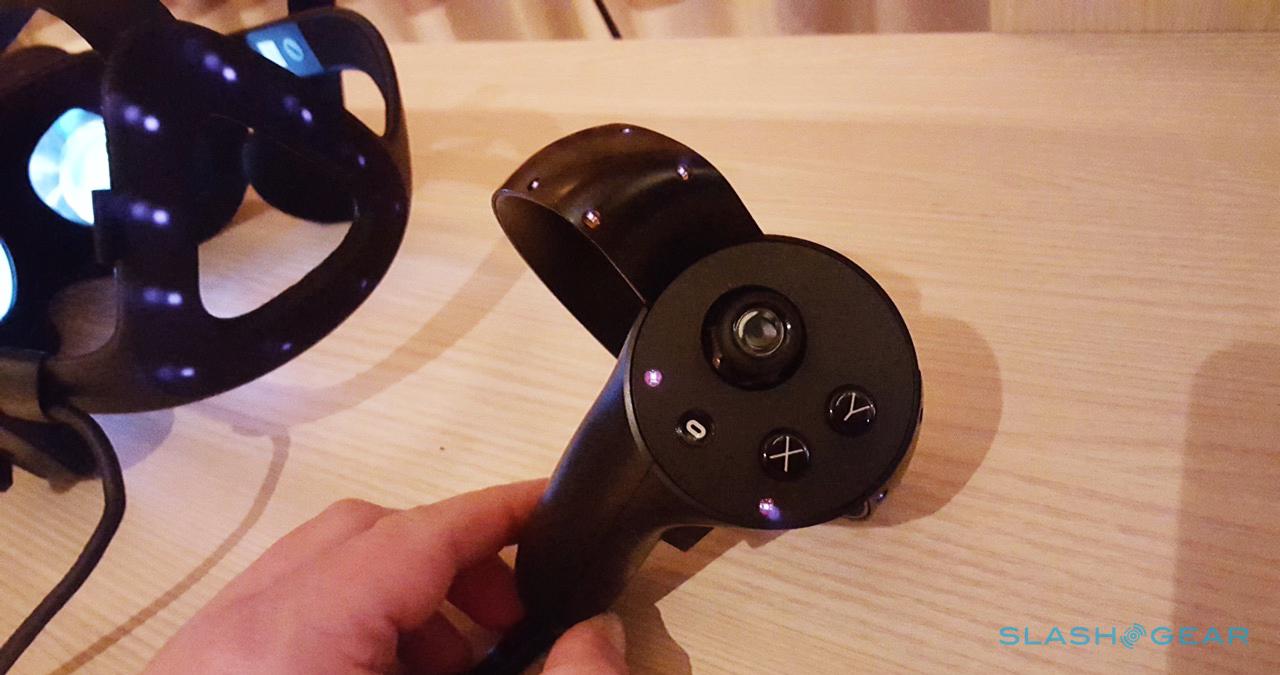 This had the effect of really grounding me within the game; seeing my hands and fingers move helped my brain suspend its sense of disbelief and accept that maybe I was in a train in a tunnel somewhere.

A voice explained how to use the controllers, how to move by teleporting and how to pick up and fire guns. It was a little more complex than your average PS4 or Xbox One shooter, in that you have to learn the buttons without being able to visually look at them (there’s a headset strapped to your face, after all) and you have to manage two controllers instead of one. It’s not overwhelming, though, and despite a few initial mistakes, I got the hang of it quickly.

You’re not given too much time to adjust before the train arrives at the terminal and you’re given a glimpse of your virtual future: baddies clad in red and black body armor have guns pointed at you, and you have to shoot them before they shoot you. Moving involved pushing a button that both slows down time and generates a portal to which the gamer will teleport.

The inside of the terminal, the objects and firearms, and the characters within the game were life-sized. You have to turn to find and keep track of your enemies. Bullets, and later on rockets, fly at you. To fire the gun, you lift your hands like you would with an arcade shooter and pull the trigger. Haptic feedback complements the experiences. 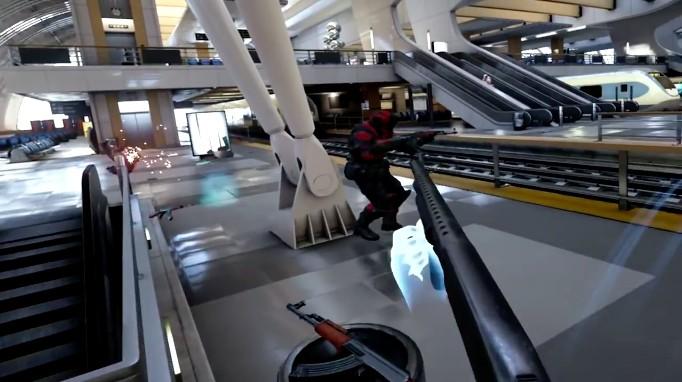 The game had a Matrix-like effect with its’ teleporting feature. Push the button for teleporting and time slows down. Bullets form trails as they slowly move through the air. Lift your hand and push the right button, and your virtual finger will pluck the bullet out of the air. Move your hand to turn the bullet, then let it go again to ‘throw’ it back at its’ source. This same move was later necessary in the game when a flying robot appeared firing rockets. 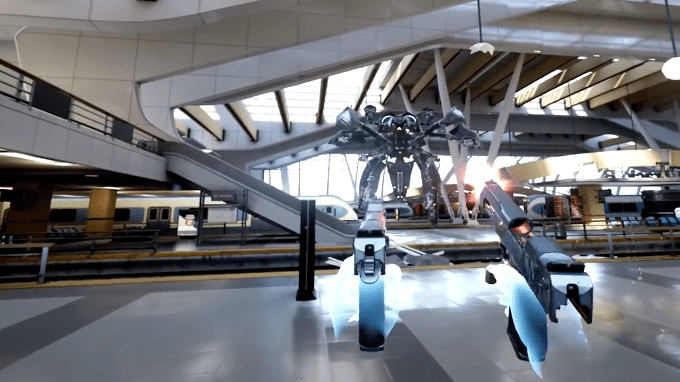 The robot’s demise marks the end of the demonstration, but by that time it’s too late to un-see everything you’d just experienced. The game is thrilling to put it mildly and ordinary console games seem very flat and boring in comparison. The next time you fire up Call of Duty or Arkham Knight, you’ll find yourself imaging what it would be like in VR. As far as existing VR experiences go, Epic Games’ has provided one of the most robust and enjoyable demos out there.

The experience isn’t without its issues, though, and that is due to the disconnect between what you’re experiencing and what you should be experiencing — a symptom of VR’s infancy. The controllers are very light, of course, while the pistol and shotgun in your virtual hands should be heavy. The lack of weight puts a veil between the action and the gamer. When these sort of games become mainstream, though, we’ll no doubt see manufacturers producing life-like firearm controllers to refine the experience.

Despite the experience foibles, the writing is already on the wall: FPS gaming as you know it will soon be a thing of the past.