Plastic Logic, Intel, and Queen’s University have revealed a new tablet using a flexible plastic display, the PaperTab, with a 10.7-inch near-indestructible display and a Core i5 processor. The PaperTab, part of Canadian university Queen’s Human Media Lab research, aims to finally replace paper with a color display and an innovative new interface which tries to mimic physical stacks of documents.

The teams call those stacks “PaperTabs” and the eponymous slate can show several of them, on-screen, at the same time. That streamlines workflow, so for instance you can easily attach a photo to an email by previewing them at the same time and simply tapping them.

However, there’s also support for less traditional methods of control. For instance, flex-sensors allow for an email to be sent if the top corner of the screen is bent; you could also trigger a send by dropping the PaperTab into your outbox tray on your desk. 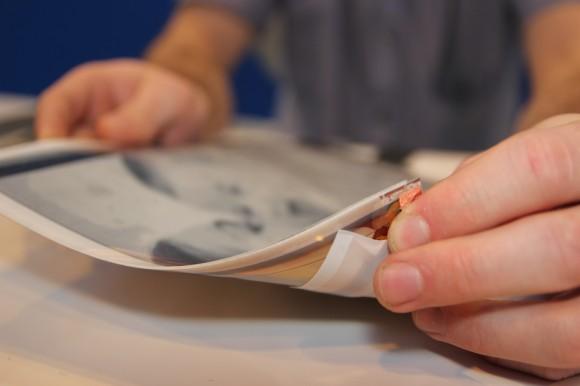 Multiple PaperTab units can be placed side-by-side, with the on-screen interface automatically extending to take advantage of the extra real-state, while the UI can be stretched out with simple gestures. There’s also interpretation of physical distance: for instance, when the PaperTab is out of reach, the interface switches to an icon mode to show what’s happening across all apps.

As you might have guessed, PaperTab is just a prototype right now, though Intel, Plastic Logic, and the Queen’s University team say the technology is all functional. Exactly what sort of battery life you could expect from a commercial product based on the hardware, and what kind of price you’d be looking at, is unclear; we’ll find out more at CES 2013 this week.