Over the last couple of weeks there’s been a bit more than a normal amount of a rumbling about the Pixel 2 XL and it’s apparent slowdown issue. Not all Pixel 2 XL units have the issue, but a significant number of them do find themselves the subject of this slowdown. Fortunate for those few users with this issue, one of their ranks happens to be a rather prolific Android journalist by the name of Artem Russakovskii of Android Police. Google’s been to visit him personally to see what’s up.

In a string of messages posted over the past couple of weeks, Artem described and showed video of the sort of lag users were reporting happening to their Pixel 2 XL units. Have a peek at that video below, and click in from there to Twitter to see the rest of the string if you do so wish. It’s from here that the story gets extra intriguing.

Here's just one example of what I described as "devastatingly and embarrassingly laggy" on my Pixel 2 XL.

And it happens all the time and not to just the Camera (the Camera is just an example).@MKBHD's examples with animations were very tame compared to the crap I deal with. pic.twitter.com/qhShInB4YS

Google contacted Artem at some point between the 9th and the 11th of August to mitigate the issue. Or to solve the issue, hopefully. They provided him with a replacement device and suggested they come visit him to analyze the device in-person.

OF NOTE: This was a great move on the part of Google PR. They know good and well that the Android community at large pays very close attention to issues like this. They know that simply asking for the unit back in the mail wouldn’t have shown nearly as much good will as coming to Artem to look at the issue right in front of him.

A Google Android engineer and Google PR representative visited Artem on the 13th of August, 2018. Right after they left, Artem posted a message: 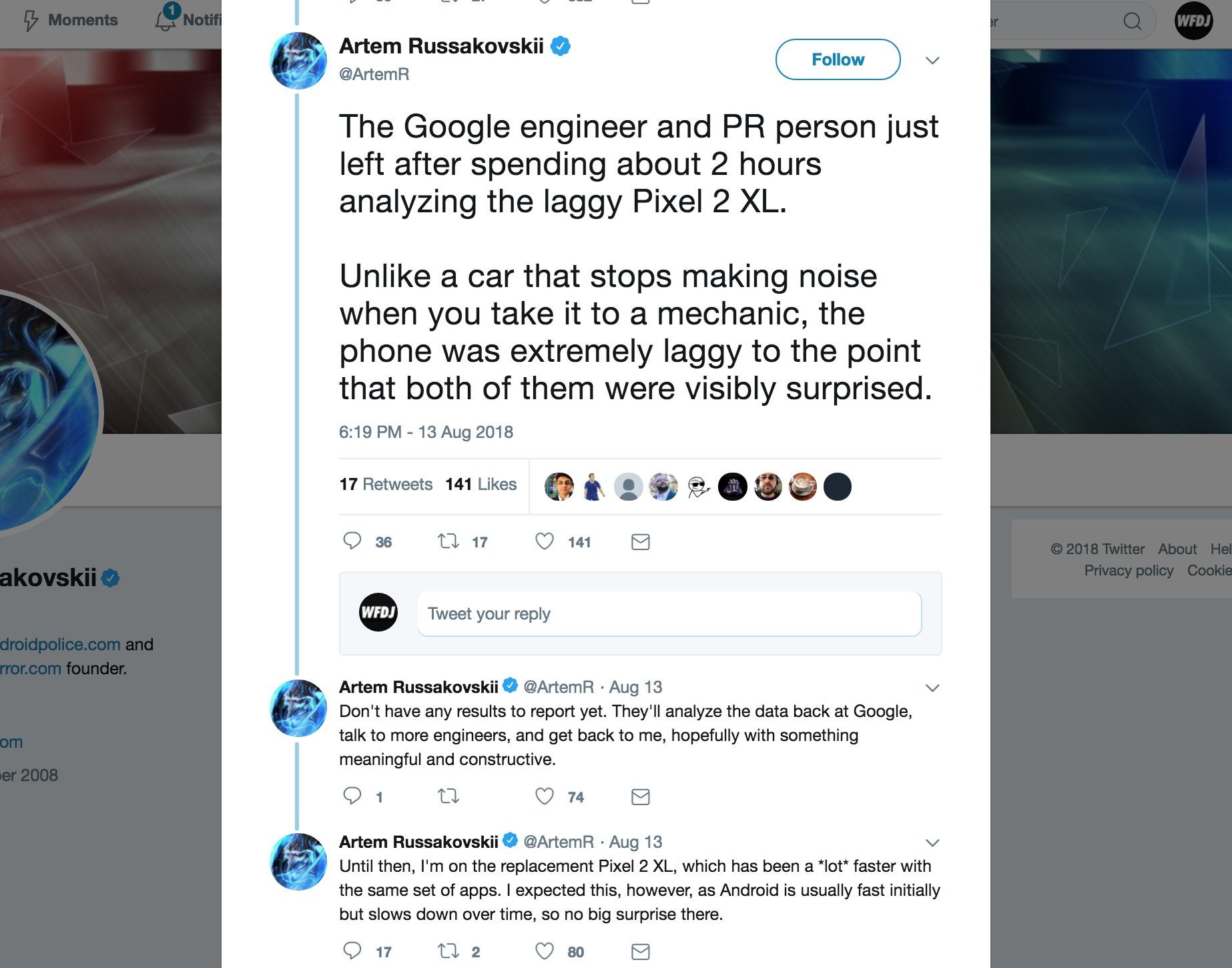 Just in case you can’t see the image above – the gist is that the Google Engineer and Google PR looked at the Pixel 2 XL for two hours and were surprised at how laggy and not-normal the device was. They’ve told Artem that they’re going to analyze the data they’d found – having likely used a PC to download data as tests were run.

Fast forward to today and managing editor of 9to5Google Stephen Hall revealed he’d received an anonymous tip on the situation. He’d heard that Google went ahead and found three possible causes for the Pixel 2 XL lag, one of which “would require hardware replacements.”

Anonymous tip: Google has at this point identified three possible causes of @ArtemR's (and others) Pixel 2 XL lag issues, one of which would require hardware replacements.

This rings rather familiar – though what we’re reminded of likely has very little to do with this situation. When the Pixel 2 was first launched, the Pixel 2 XL had some display issues that seemed to sort of… fade away after a few weeks. It does not seem as though the same thing will happen this time around.