Home lighting isn’t something you’ll regularly find on the SlashGear frontpage, but when that lighting is capable of thousands of colors and comes with a remote control, that’s when the geeks start paying attention. Philips’ LivingColors range has been around for a few years now, but the Generation 2 models promise 50-percent more light for an altogether more usable lamp. Check out our full review plus a video demo after the cut.

In the box there’s the LivingColors lamp itself in a drawstring fabric bag, a remote control and three AAA batteries, the AC adapter and the user documentation. The bag seems a little like packaging overkill, but it did keep the clear plastic of our review unit free of any scratches during transport; Philips also offer patterned, frosted and smoked versions. Setup is straightforward: plug in the mains adapter and sit the lamp facing the wall (around 50cm away for best results, according to Philips’ advice).

Control is via the included remote, which uses RF rather than IR and as such doesn’t demand line-of-sight; useful if the lamp is under an end-table or otherwise tucked out of the way. All of the controls are touch-sensitive, with power buttons at the top, a color-wheel in the center with saturation controls inside, and brightness controls at the bottom. We had to pair the remote with the LivingColors lamp before it would work – you bring it near the Philips logo and hold down the power-on button until the lamp flashes three times and then briefly glows green – but after that we found it had sufficient range to be used from the next room. While we only had one to test, you can control multiple lamps from a single remote, or conversely pair multiple remotes with a single lamp. 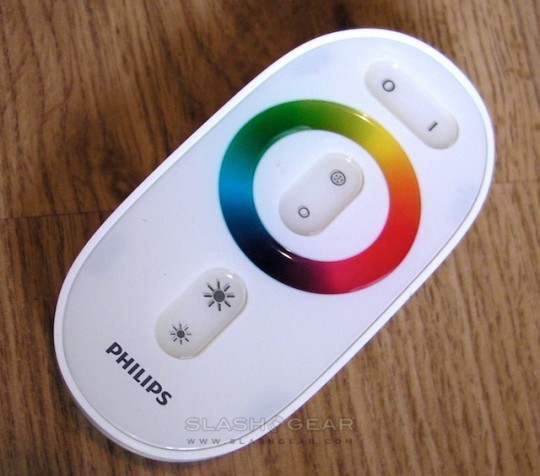 It’s worth noting that the remote control uses the 2.4GHz band, and Philips do warn that you can experience some interference with a wireless router. The manual gives instructions to change the default channel, should you believe that’s happening, though we used the LivingColors right next to our router and had no issues with it.

Two modes of operation are supported, either a single stable color or a constantly shifting rainbow that cycles through all the hues available. In the former, tapping at any point around the color wheel instantly sets the lamp to that color, or running your finger slowly around the wheel gradually mixes the LEDs to tweak the shade. It’s worth noting that, somewhat confusingly at first, the latter process doesn’t necessarily line up with the color your finger is over on the control wheel itself: you can tap and hold on dark blue, for instance, then scroll 180-degrees, and the color will have only shifted to light blue (rather than the yellow your finger is now touching). That basically means that for precise color control you need to watch the lamp rather than the remote. Of course, subsequently tapping at any point on the wheel flips the LivingColors to that hue. You can then use the saturation buttons to deepen the tone or weaken it (until it’s pure white), and the brightness buttons to adjust the lamp strength.

In the second mode, the lamp cycles through all the colors it’s capable of. That’s triggered by running a finger clockwise around the entirety of the color wheel, then tapping the power-on button. Tapping on the wheel then controls the speed at which the colors change, and you can adjust saturation and brightness as before. 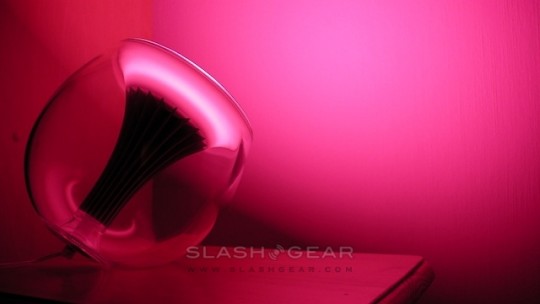 The selling point to LivingColors Generation 2 is that it produces 50-percent more light than the first-generation lamps. It’s certainly bright enough to dazzle your eyes if you look directly into the color disk at full-brightness, and even in a daylight room the color effect is strong and noticeable. Obviously the effect is better in darkness, however, though if you really want to bathe a normal-sized room completely you’d probably need at least two lamps. Alone, the LivingColors lamp is particularly suited to highlighting particular corners or areas of the room, rather than general lighting.

Is it worth the £159 ($257) MRSP? If you consider lighting to be purely functional rather than a source of decoration, then perhaps not. Philips’ press materials bill the LivingColors as a way of matching room to mood, or even brightening your day in a form of DIY color therapy. We didn’t feel any great mood enhancement, but tweaking the tones and generally playing with the light was surprisingly addictive. Company’s like Mathmos have shown that there’s a market out there for decorative lighting, and thanks to the extra brightness in this second-generation model you certainly feel like you’re getting more color for your money. As well as a mini-version, which lacks the remote and is controlled by a color wheel on the body of the lamp itself, Philips are offering wall, ceiling and floor-standing models as part of the LivingColors Luminaires series; think of them as designer-style lighting and the prices start to look more reasonable in comparison. Since they can all produce standard white light you could feasibly replace task lighting with them too, then turn the room into a personal disco later on. Not an essential gadget, perhaps, but then again the best gadgets we play with seldom are.