Given Philips’ addiction to LED lighting on both its Ambilight TVs and its hue wireless lightbulbs, it’s a surprise it took the company so long to cook up the Ambilight+hue system in the new Elevation TV. Announced back in July, the 60-inch Elevation builds on the existing Ambilight system by hooking in the rest of your living room smart lighting, matching all of the lamps to what’s happening on-screen.

For the unfamiliar, Ambilight uses LEDs across the back of the set to flood the wall behind the set with color. In the initial iterations only one bank of LEDs was used, but Philips gradually increased that until different arrays across all four of the sides, which could be independently controlled to match the predominant color on-screen.

Philips hue, meanwhile, is the company’s range of wireless LED lightbulbs which, using a ZigBee mesh network, can be individually or collectively changed between 16-million colors. There’s also remote access using both the company’s iOS and Android apps, and through a connection to IFTTT, with other platforms. 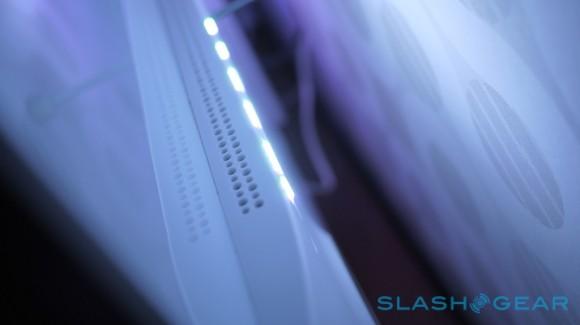 On the Elevation 60PEL8708, then, the multi-color LEDs are hue-linked to nearby bulbs in other light fittings. So, if you have a standard lamp or a table lamp nearby your TV with a hue bulb screwed in, you can pair them up into the same group and have them synchronized.

In practice, the lamps responded quickly to the on-screen action, though the effect was more impressive the more you had grouped up. It’s also possible to toggle the expanded Ambilight effect off, if you don’t want the full room to start changing color. Turn off the TV, and the hue lamps return to their original settings. 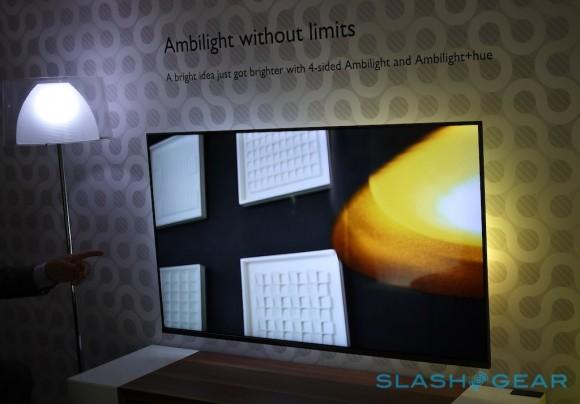 Unfortunately, you can’t use the Elevation set itself as a standalone lamp in the hue setup; the row of 94 lights across the back is only for use with what’s on-screen. Other specs include passive 3D, smart TV services like streaming media, four HDMI, and three USB ports, along with integrated WiFi and support for streaming content to a second display elsewhere in the home.

Ambilight+hue doesn’t come cheap on the Elevation, however; the 60-inch set comes in at £2,800 ($4,175). However, as long as you have any Ambilight 2011 model or newer (with a type number 6 or higher in xxPFLxxx6), you can now pair it up with your hue system. Given you can find such a set for roughly a fourth of the price, all of a sudden it looks like more of a bargain; just don’t forget to factor in the $199.99 for a starter hue kit.