All penguins – of all types – have been discovered to have no taste for sweet, bitter, and umami flavors of edible matter. Of course they can’t taste anything sweet, even if it happens to be a sweet-tasting rock – but this finding is linked inextricably to eating. As it turns out, its likely penguins lost their taste for several types of food over the course of their migration to cold climates and evolution to the creatures they are today – friendly, tasteless waddlers though they are.

As tastes such as these don’t often appear in the bitter cold, penguins simply did not need to have the genes to detect them. That’s what a team of researchers has concluded after sequencing the genomes of a couple of penguin tribes: Adelie and emperor penguins.

According to Jianzhi “George” Zhang of the University of Michigan, “Penguins eat fish, so you would guess that they need the umami receptor genes, but for some reason they don’t have them.”

Zhang is co-author of the paper being published on the subject this week in the journal Current Biology. “These findings are surprising and puzzling, and we do not have a good explanation for them. But we have a few ideas.” 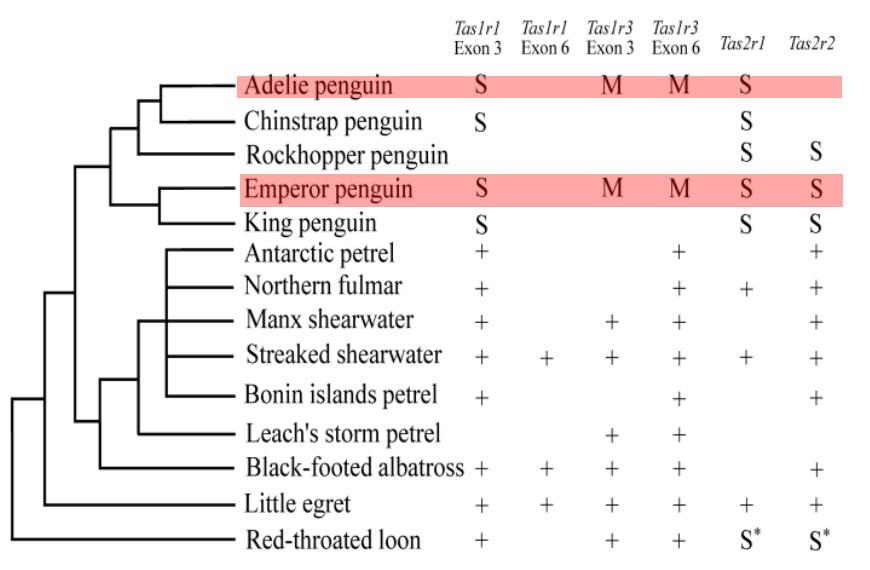 Above you’ll see a chart of genes as they appear in several animals. The following is true:

NOTE: Umami can also be described as a “pleasant, savory taste.”

It’s not just penguins who aren’t able to taste the same as humans. Imagine that! Who would have thought a Black-footed albatross had a less-than-perfect set of taste receptors for bitter foods?

The paper goes by the name “Molecular evidence for the loss of three basic tastes in penguins” and was authored by Huabin Zhao, Jianwen Li, and Jianzhi Zhang.