Autonomous cars may be a sexy, sci-fi vision of the future, but autonomous trucks could be far closer to reality – and a lot more beneficial. Peloton today is showing off its new Automated Following system, a straightforward name for Level 4 autonomy that the company believes is far closer to public highways than others might have you think.

You may not have heard of Peloton – not to be confused with the bike company – but you’ll probably know some of its backers. BP, Intel Capital, Lockheed Martin, UPS, and Volvo are all among the roster of investors, along with Tier 1 auto parts suppliers and others. That has not only given the startup its funding but a shortcut into tight integration with the underlying systems of modern truck models.

Indeed, this new Level 4 system is not Peloton’s first ride on the automated truck rodeo. The company already has a Level 1 system, PlatoonPro, on the market, tailored for the particular nature of long-distance trucking.

In PlatoonPro, two trucks are interconnected. The driver in the first vehicle steers, accelerates, and brakes as normal; the second truck, connected by a direct V2V (vehicle to vehicle) link, also has a human driver, but only for steering. The second truck’s speed is controlled by that of the first truck, maintaining a relatively tight distance between the two.

Both vehicles still require a driver, of course, but there are still savings available in the system. PlatoonPro is already operated with six fleets, with more in the pipeline, with Peloton claiming a “perfect safety record” in use. Customer trucks have shown average fuel savings of over 7-percent, which could add up to as much as $10,000 in savings per truck each year.

The Peloton Automated Following system builds on the same concept as PlatoonPro, but removes some of the drivers. The Level 4 system still has a human driver in the lead vehicle, who operates it as normal. They’re followed by a driverless truck, however, linked by the direct V2V connection with minimal latency, and following it closely.

Peloton’s argument is that this human-machine hybrid approach has some big advantages that more aggressive Level 4 and 5 automated driving systems being developed miss out on. Humans, the company points out, are really good at analyzing data from our physical senses and reacting accordingly. “We continue to leverage drivers for their skills, experience and intuition,” the company says.

At the same time, the efficiency benefits of a closer-following second vehicle – and, in time, longer series of vehicles – are unmistakable, but only the computerized system is capable of reacting instantly to emergency braking or other maneuvers and stopping before an impact takes place. Then there’s the issue of driver shortages, something which the haulage industry struggles with. Not only are drivers in short-supply, they also typically switch companies regularly.

Peloton’s Automated Following doesn’t represent the same job dilemma as fully automated systems might to human drivers. Peloton also points out that it can potentially double the quantity of goods that a single trucker could haul in a trip, leading to better compensation and more efficient routes. 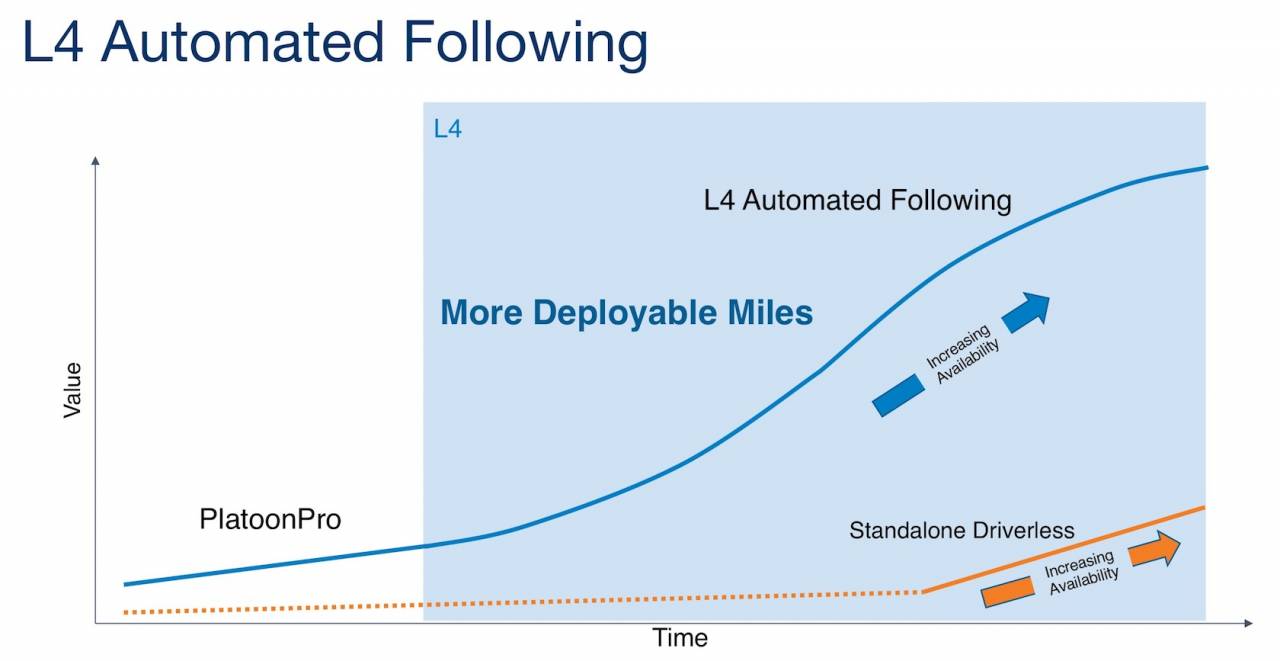 All aboard the truck train

Peloton’s timeline for Automated Follow is fairly vague right now. Testing is underway currently, with a commercial launch some way out. Still, the company insists that it could have Automated Follow commercially deployed before fully-driverless Level 4/5 systems, because of the human driver element.

More efficient use of roads by haulage is going to be a benefit to regular drivers like the rest of us out of the gate. However Peloton envisages other potential benefits for the system, which could one day expand to include non-commercial vehicles. There’s the possibility, for example, of regular passenger cars joining a truck platoon and handing over their controls to the snake of vehicles for periods of extended highway driving. 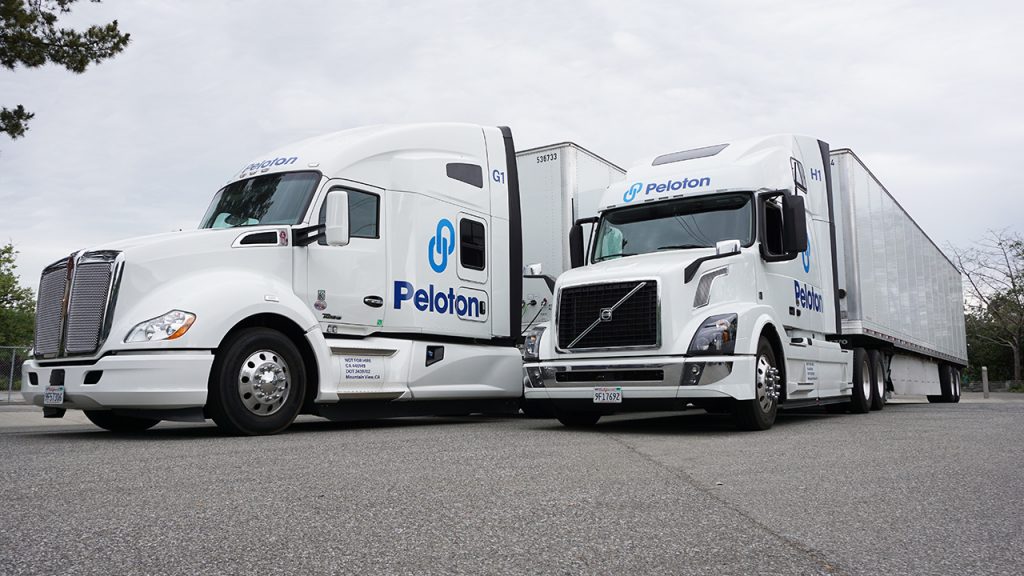 That would have fuel economy advantages for the passenger car, as well as comfort benefits for the driver who wouldn’t have to operate the vehicle themselves. You could, for instance, choose to join a platoon for the more mundane sections of your twice-yearly road trips, or hop into the line for an easier commute.

We’re not at that stage yet, though Peloton’s pricing structure is already built with such possibilities in mind. Currently, PlatoonPro customers don’t pay for the initial installation of the V2V and other hardware. Instead, they pay when they use the following system. Passenger cars could take the same approach, meaning you’d only ever pay for an eventual Automated Follow service if you opted to use it.