Supposing you’re in a situation where you’d love to work with Apple’s OS X desktop operating system, but for whatever reason you’d rather not – or cannot – work with an Apple-made piece of hardware. If you’re the alternate-solutions type, there may be hope for you with the Linux Ubuntu-based system called Pear OS. The newest version of Pear OS – that’s Pear OS 8 – works with a look and feel that’s very much the most solidly cross-breed inspired iOS/OS X system out in the wild today – again, working with Unbuntu, but certainly appearing to bust out an alternate-universe Apple system by all looks and touches.

With Pear OS 8, users are able to load up to a variety of machines. This operating system works on desktop computers, tablets, and – though the developers of the system have not quite commented on this specifically as yet – massive-screened smartphones as well. This system works in both 32- and 64-bit system iterations, and will eventually work with Microsoft’s Surface line of tablets in addition to the current functional desktop system.

Of course developer David Taveres will need some support in the form of a crowd-funded effort to make this all happen, but for now things are looking hopeful. Users are currently able to have a peek at Pear OS 8 for desktop machines with downloads ready and waiting – the tablet (and alternate displays) version is the bit that’s currently in full-speed-ahead development. The creators of this system also have their very own Pear Cloud and a variety of Pear-based apps in full effect. There’s also a burgeoning community of hardcore Pear OS users ready and willing to roll with each new version. 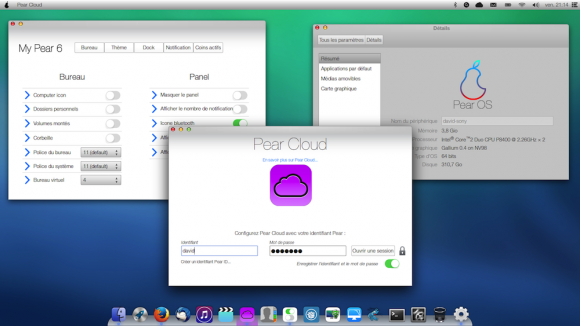 At the moment, Pear OS 8 works with machines that have a 700 MHz or higher processor, 512MB of RAM or higher, and 8GB of hard-drive space at least. The display of this potential Pear OS 8 machin must be VGA capable of 1020 x 768 pixels or higher, while either a CD/DVD drive or USB port is needed to install the OS in the first place. It’s recommended that the device work with ATI and in some cases the proprietary fglrx driver, Intel i915 or better, and NVIDIA graphics with their own proprietary driver.

Sound like a healthy upgrade to you? Have a peek at the system and let us know how it’s working for you – and we’ll keep you updated on the full Tablet Edition action in the meantime!