Parrot‘s drones may be more commonly associated with casual flight, but the company is looking to be taken seriously in UAVs by courting business pilots. The French firm has cooked up a multi-camera sensor that turns a drone into a farmer’s best friend, doing smart agricultural surveys that can figure out the best spots for crops and gage the health of plants from hundreds of feet above them.

Dubbed Parrot Sequoia, the kit consists of two components. Fitted to the underside of the drone is a multispectral sensor, effectively consisting of five differently-tuned cameras all in one cluster.

As well as a 16-megapixel regular camera, the box can also identify the specific green, red, red-edge, and near infrared wavelengths that, combined, allow healthy plants to be differentiated from stressed plants or bare soil.

The same component also includes 64GB of onboard storage, WiFi, and movement sensors including a magnetometer and IMU.

Mounted to the top of the drone, meanwhile, is the sunshine sensor. That has four spectral sensors which track the same filtered light as the camera array, together with GPS, an SD card slot, and matching movement sensors.

By comparing the raw sunlight with the results from the fields below, farmers will be able to predict crop yields, identify possible areas where water or pesticide are required, and pinpoint the best place for extra fertilization.

Parrot isn’t the first drone company to wade into agricultural use, though it says its system has the advantage not only of being modular and fitting to any fixed-wing or multi-rotor style UAV, but of being around half the price of rivals. 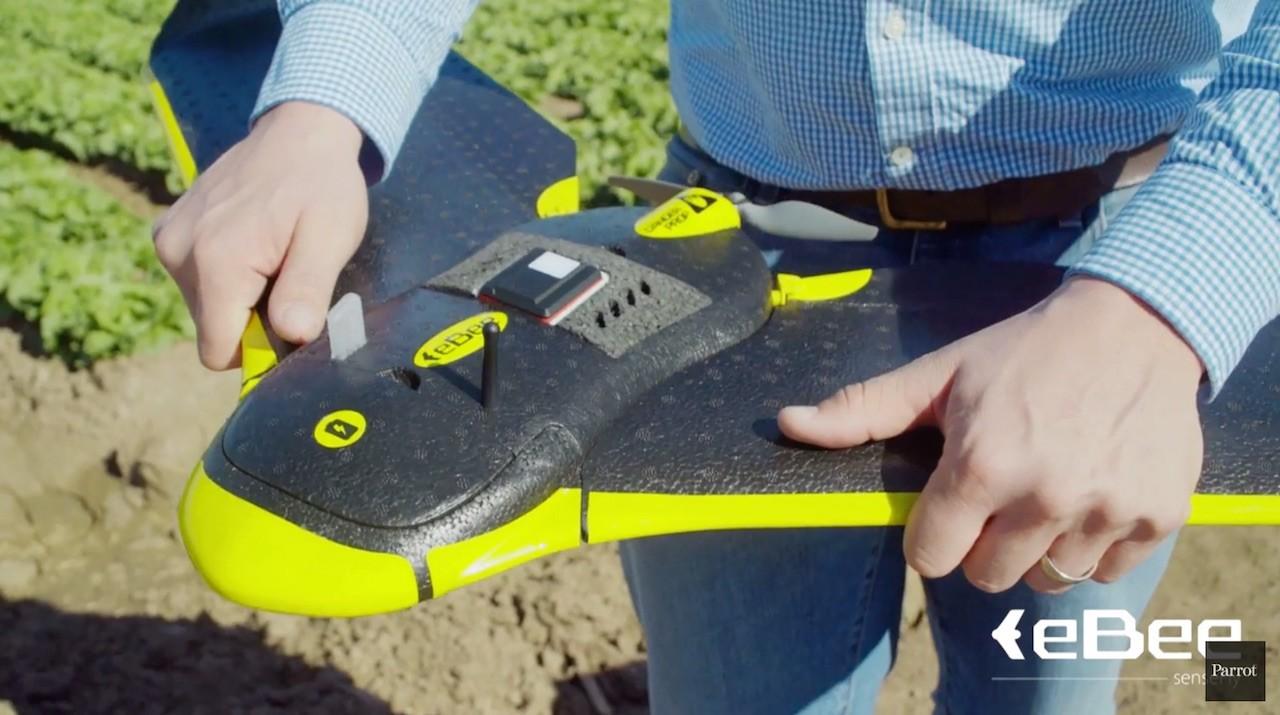 Back in November, DJI revealed a farming-specific drone, the MG-1, though that will be sold as a whole flight-ready package rather than as an upgrade kit for existing unmanned aerial vehicles.

Since raw data alone isn’t much use, Parrot has collaborated with MicaSense on local and cloud-based processing of the Sequoia’s returned metrics. That includes automatically tracking changes over the seasons, together with autopilot flight to specific areas controlled from tablets and laptops in the field.

MicaSense will sell a bundle of Sequoia and a year’s subscription to its ATLAS processing for $3,500 when the camera ships in March this year.

Back at CES in early January, Parrot revealed its latest drone model, the Disco. That eschews the quad-rotor design the company has used so far, in favor of a fixed-wing layout, smart autopilot, and extended runtimes that see the drone remaining in the air for up to 45 minutes at a time.