Now with a solid release date and price, Parrot’s AR.Drone is looking all the more exciting. A four-rotor indoor and outdoor flying machine, complete with dual-cameras and an iOS control app, the AR.Drone certainly ticks most of the geek checkboxes. We stopped by the London launch to try our hand at piloting the quadricopter, and to see whether – unlike some other recent R/C helicopters – it really is as idiot-proof as Parrot claim. Check out our video demos and more after the cut.

Parrot tells us there have been plenty of changes since the AR.Drone made its debut at CES back in January 2010. They include hardware tweaks to the quadricopter itself, adjusting the balance and weighting among other things, together with multiple updates to the control software. Currently that’s written for iPhone or iPod touch – and presumably in “doubled” mode on the iPad – but since Parrot have released the AR.Drone API publicly, they’re expecting developers to code up versions for Android and other platforms in short order.

Control is straightforward, with the screen dominated by a view from the AR.Drone’s front-facing camera (updating at 10fps) while the down-facing camera is in a small window in the top left-hand corner; you can flip the two by tapping the PIP. At the top is an “emergency” button which kills the quadricopter, while at the bottom is a take off/landing button; when you hit it initially the AR.Drone takes off and hovers automatically at about chest height. The left thumb control, when tapped, allows you to move the drone via the accelerometer, tilting it to move left, right, forward and back. The right thumb control spins the AR.Drone on its axis – the two red LEDs are always at the back, the green at the front, to help you orient yourself – as well as controlling altitude. Currently there’s no way to record the video footage from either camera on the iPhone, though Parrot say there’s nothing stopping third-party developers from offering a suitable app for that.

In practice, any trouble you experience is generally pilot error rather than the AR.Drone falling short. The autopilot mode, which hovers the quadricopter in mid-air when you let go of any of the controls (or if it flies out of WiFi range), is almost magical in its stability: you can push or even shove the ‘copter and it’ll stay composed. It’s once you start actually flying it yourself, of course, that the crashes begin; reaction times between moving the iPod touch and the AR.Drone responding are almost instantaneous over the ad-hoc WiFi network the quadricopter itself creates, but it’s easy to spin it around and then lose track of which orientation is which. A little practice improves matters, but thankfully the (removable) EPP hull is sturdy and impact resistant – we saw several crashes (of which we were only responsible for a few) and despite taking a battering none of the AR.Drone demo units showed any sign of damage.

Parrot supply two EPP hulls, one with enclosed blades for indoor use and a simpler, more streamlined “shaped” version for outdoor flight. They, together with spare rotors and other parts, will go on sale alongside the quadricopter, just in case you have a more serious accident. Fingers pushed into the blades will kill the motors straight away (though considering the speed they’re rotating you may still end up a bit sore) but Parrot are still suggesting the AR.Drone be limited to pilots of 14 or up. 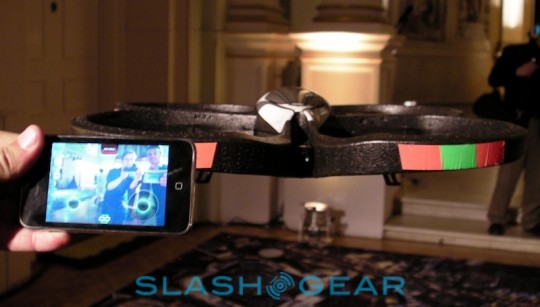 We were having enough fun in single user mode, but of course Parrot are positioning the AR.Drone as a flying game system. Thanks to various apps which will be available through the Apple App Store, together with tag detection software running on the Drone itself, two people can dogfight with their AR.Drones, watching virtual explosions and tracer trails on the iPhone display. It takes some practice – and the 10fps update speed doesn’t help matters – but it does at least promise some longevity appeal. Parrot reckon over 450 developers have signed up for SDK access, so hopefully we’ll see some results from that hit the App Store shortly after the AR.Drone’s release.

As with any flying toy, battery life is the AR.Drone’s biggest drawback. A fully-charged power pack – one of which is included in the box – will last for roughly twelve to fourteen minutes of use. After that, you’re looking at around 90 minutes of charging before you can have another go. Parrot will be selling separate battery packs alongside the AR.Drone from the get-go, but there’s no word right now on what sort of price they’ll command; the company told us that those figures hadn’t been decided on yet. If they’re affordable enough to pick up a few spares without breaking the bank then that won’t be so bad, but we won’t know that until closer to release.

The Parrot AR.Drone will landing in the UK on August 18th 2010 at HMV stores, priced at £299. Meanwhile it will arrive in the US for $299 from September 2010. More hardware details in the gallery below.