This week the folks at Parrot have revealed several additions to the AR.Drone 2.0 ecosystem, not least of these being a new High Density Battery. While the current iteration of the Parrot AR.Drone’s in-box battery does offer quite a bit of flight time, there’s always room for more action – and longer-lasting action, at that: a non-stop 18 minute flight is in store with this slightly more orange-looking Lithium-Polymer battery pack.

The Parrot AR.Drone iOS app had ben given a boost with “Director Mode”, this bit of movement adding on a few Camera Settings, Post-Production settings, and sequence edits. This app is the same one that’s already out on the App Store for iOS devices, here bringing on a collection of pre-registered movements for the drone with an in-app purchase of $3.99 USD. We’ll be giving you a hands-on look at this set of moves soon – stay tuned to SlashGear’s AR.Drone tag portal for more while we’re at it. 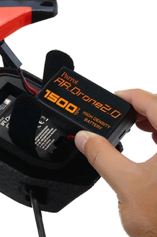 Parrot AR.Drone 2.0 will be working with a new Flight Recorder system allowing users to record and keep flight data and GPS-localized information from here on out. This update will be coming attached to the Flight Recorder, of course, that lovely little gadget shown off at CES 2013 in another cool bit of orange.

This update will allow the AR.Drone 2.0 to grab position information (+/- 2 meters) throughout the drone’s full flight. The Flight Recorder also works with 4GB of Flash memory which allows the machine to record right around two hours of HD video – that’s across several flights, of course. Flight Recorder still rings in at $129.95 while the high density battery will cost you a cool $69.95 starting this summer (aka right this minute).

Flight Recorder also allows for Click & Go Piloting Mode, this giving the user the ability to define a destination based on an overhead map sourced from satellites from space . Once the destination set is reached, the machine will be able to return with a simple tap of the Home button. Sound nice? 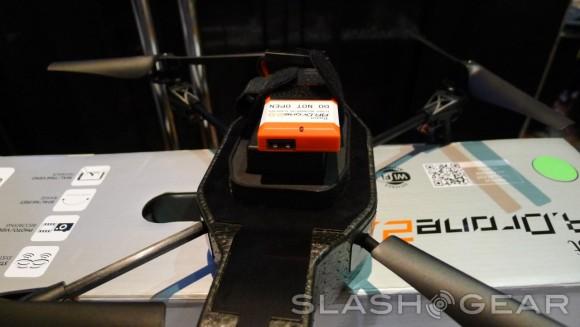 What’s more, the Parrot AR.Drone 2.0 can now work with open source high end autopilot software from the Delft University of Technology. They’ve worked to create this autopilot software code-named Paparazzi, it able to be integrated with the AR.Drone hardware through the Parrot Flight Recorder – simple stuff. Plugging in the AR.Drone to a laptop working with Paparazi allows a single button (Compile) setup, and you’re off!