If you were tempted by Panasonic’s Lumix GF1 micro four thirds camera last year, but put off by its intimidating black casing, excellent news.  The company has announced two new versions of the GF1, with the only differences being that they get silver and pink shells.  The two new Lumix snappers have the same 12-megapixel sensor as the original, together with the interchangeable lenses.

There’s also 720p HD video recording in AVCHD Lite format, along with 3-inch rear LCD with 460K dot resolution and Live View.  No word on pricing – the black original came in at $900 when it first went on sale last September – but Japanese buyers will be able to pick up the new micro four thirds cameras from March 12th 2010. 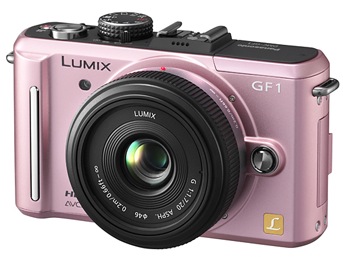