Given how much people like to anthropomorphize their robots, what sort of lovable personality could you assign to an autonomous floor-cleaning inchworm?  Designed by Panasonic, the Fukitorimushi (“wipe-up bug”) drags itself across floors, wiping up dust and dirt with its nanocloth underbelly. 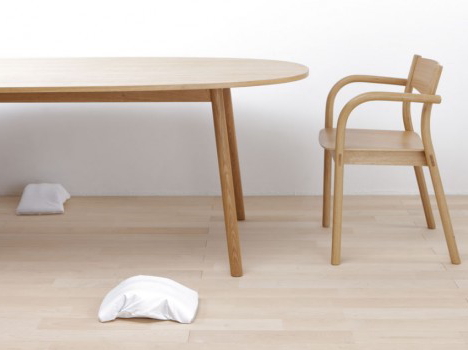 The nanocloth itself is the handiwork of Teijin Ltd., and comprises thousands of polyester filament fibers each 7,500x thinner than a human hair.  Fukitorimushi identifies dirt via blue-white light, and once the robot has discovered some it flashes red and begins shuffling around on the patch until it’s cleaned up.  Like Roomba, it’s capable of finding its charging station when the battery is low.

Although at first (and second, and perhaps third) glance Fukitorimushi is a little creepy, Panasonic claim that users soon come to adore their creeping buddies and want to take care of them.  That’s handy, because the nanocloth needs replacing periodically; the theory is, this will make people treat the floor-cleaner more like a pet.  No word on whether we’ll see Fukitorimushi reach the market; Panasonic have been demonstrating it at the Tokyo Fiber Senseware exhibition in Milan.