At a trade show known as COMDEX all the way back in 1983, an intrepid group of technology enthusiasts captured a great many bits and pieces of what were to become crucial components in the computing universe that we know today. One of the demos shown here was Microsoft’s original demonstration of Windows 1.0. “You might think of the icon as the very smallest form of a Window”, says the presenter, “and as you move the cursor down into this area, it takes on a different meaning, because now it’s in the icon area.” Things are still very, very rudimentary back when this video was filmed.

It’s VisiCalc co-creator Dan Bricklin that captures this bit of history, and according to Time, it was Bricklin’s interest in recording all the things that led to the nearly-lost recording of Steve Jobs shown just this past weekend for the first time in 30 years. That tape was of a second performance of the same presentation, but that’s neither here nor there.

“I’m just giving these demonstrations ad-hoc, not a canned pitch or anything.”

What’s here is what amounts to the same sort of situation we have when we head to CES or Mobile World Congress each year, finding technology that’s just in its infancy. You’ll find the extremely new-born state of recording questioned by the presenter, relatively unheard of here in 2014 on a wide-open free showroom floor.

Move forward to around 6:55 to see the first Windows 1.0 demo taking place.

She asks if the video being recorded has sound – these weren’t necessarily recorded at the same time back in 1983 with a personally-carried video recorder like the one Bricklin employs. She also asks if the recording is “for educational purposes or for promotional purposes.” She’s not worried about the public seeing the early OS in action – there is no internet for a video like this to spread – she just wants to make sure she’s doing a good enough demo for developers at home to see. 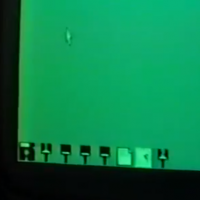 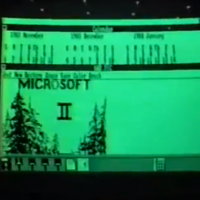 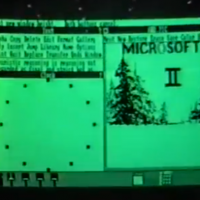 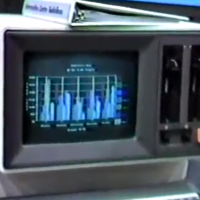 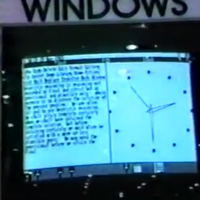 This video records Windows in action just three weeks after Windows was initially announced. At this point Windows was not a full-fledged operating system as such, but an add-on for MS-DOS. While Windows had been announced on November 10, while COMDEX took place November 28 to December 2 the same year.

UPDATE: Dan Bricklin’s videos are being chopped up (by Bricklin himself) to show pointed bits and pieces – important oddities like Bill Gates chatting with Jonathan Sachs on the show floor – casually – no big deal. Also shown is a short demo of the Apple //e with a mouse – well before the first Macintosh, mind you.