Not by George Lucas’ or Disney’s will, but by the will of the people, the original version of Star Wars has been released. Truly it is a good day, a day which will be long remembered. Today is a day in which you will be able to attain the 1977 edition of the original Star Wars movie. This was before it was titled Star Wars: A New Hope. For those of you that are unaware, the first big change to Star Wars game in its re-release in 1981 – from there it continued to evolve. Now we have the 35mm original.

Images above and below this paragraph come from Peter Mayhew, Chewbacca himself, over on Twitter as @TheWookieRoars. What it shows is Mayhew’s original Star Wars script. The first one. Back before it was even re-titled “Star Wars.” 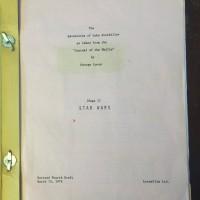 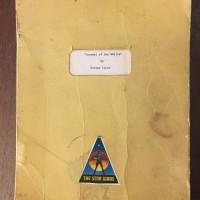 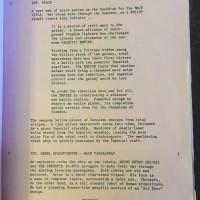 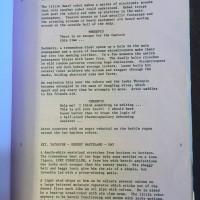 As you might have heard from Stephen Colbert, this script calls the film “The Adventures of Luke Starkiller as taken from the “Journal of the Whills, Saga I: The Star Wars.” Slightly less punch to it there.

Someone has gotten ahold of an original 35mm film print of Star Wars, as released to theaters in 1977. This is technically the property of the film studio and cannot legally be the property of any one individual unless sold to them by the studio directly.

That’s not happened, adding another layer of not-quite on-the-level business going on here.

But the people that’ve done the work to bring the film to you, the public, the ravenous, ravenous Star Wars fan-filled public, they deserve all sorts of thanks. They’ve put in countless hours restoring the film print back to the quality it was seen in theaters in 1977.

If you’ll remember the restoration process done before the release of the Star Wars: Special Edition films in 1997, you’ll recall George Lucas speaking about the degradation of the film stock since its original release.

Luckily the film stock found for this project was a low-fade release print, apparently released using the original theater-released edition of the movie. This hard copy was created some time between the original release and the re-release in 1981.

This project was put into action by a crew called Team Negative1. They’ve spent their time and their own hard-earned cash to make this project a reality.

The picture is going to look soft?

“Yeah, it might. but guess what, when you project it, that kind of thing happens which compensates for the dust and scratches on film. the reason it seems that way on the digital version is you’re seeing it at sharper resolution in some cases than it would seem in a theater. Of course watching it on a monitor/crt or tv, is completely different from the effect of watching projected film onto a screen.”

Where can you get it?

What you can do is take note of the keywords throughout this article – the title of the release, for example – and search file downloading sites of your choice. Torrent sites, for example, can be full of malicious files you’re not going to want to handle.

But the reward is great.