Home entertainment can be difficult: do you invite dozens of speakers into your living room in the quest for perfect sound, or opt for a one- or two-box setup and maybe sacrifice some quality for simplicity? UK firm Orbitsound claims to have the compromise, with its T12v3 soundbar using a clever, patented system to create stereo sound with room-wide sweet spot. It’s the holy grail of home entertainment, but does it really work? Check out the full SlashGear review after the cut.

Given soundbars are meant to be discrete ways of adding speakers to your home entertainment setup, you can’t really fault the T12v3 for its simple appearance. A 605mm long, gloss-finish black bar, it has a magnetically clipped speaker mesh up front – hiding six speaker cones and a blue status LED – with a discrete Orbitsound logo, and a non-removable speaker grill at each end. Up top is an iPod/iPod touch dock, with four different inserts supplied to suit different versions. No iPad dock, which Orbitsound tells us is because it wouldn’t suit the under-TV positioning expected of the T12v3. 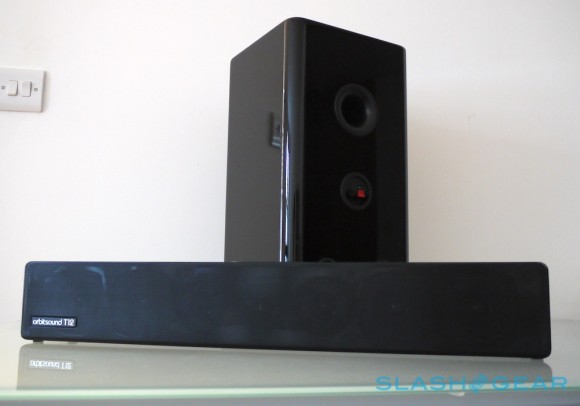 Connectivity is handled around the back, with a DC power socket, optical and coaxial digital inputs, 3.5mm stereo audio and RCA analog inputs, and two RCA composite video outputs (which mirror the same video-out signal from an iPod). There are also connections for the included subwoofer, a 460 x 230 x 230 mm gloss-finish block. A volume knob and power switch complete the controls; on our pre-production review sample there’s also a “Stereo Width” switch, which flicks the stereo affect from off to “normal” or “wide” but which won’t be present on retail units.

The new speaker cones consist of two 1-inch drivers and four 2.5-inch drivers, along with a 2-inch full-range driver at each end. The sub has a single 6.5-inch woofer. Inside the main unit there are two 45W stereo channels and a separate 90W subwoofer channel. Orbitsound quote standby power consumption of 2.3W and idle consumption of 5.6W. 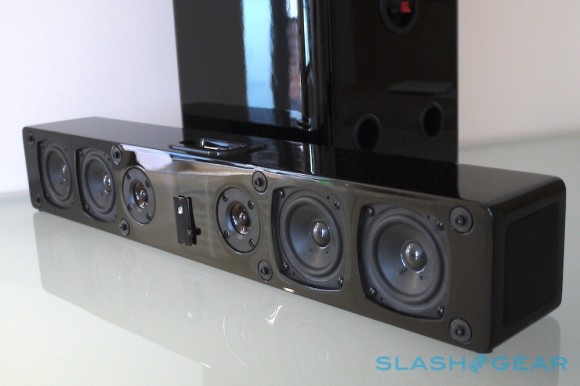 Admirably, Orbitsound includes all the cables you might need in the box. As well as a 1m optical digital cable there’s a length of subwoofer wire, phono (RCA) and 3.5mm cables. A remote control allows tweaking of the volume, treble and bass, as well as flicking between inputs and controlling playback of any docked iPod or iPhone.

Soundbars have generally worked in one of two ways so far: either you have regular stereo speakers spread out at either end of a single, long bar (usually at the cheaper end of the market) or a complex speaker array that uses upward of 20 drivers and special processing technology to bounce sound around the room (at the more expensive end).

Orbitsound’s patented system is different. It uses a system whereby the common sound from the left and right stereo channels is isolated from the mix and pushed out of the mono array running across the front of the bar. Meanwhile, the side-drivers – which fire in phase, so both cones move left or right in relation to the soundbar at the same time – push out a specially calculated noise that modifies that mono sound into something our ears hear as stereo. 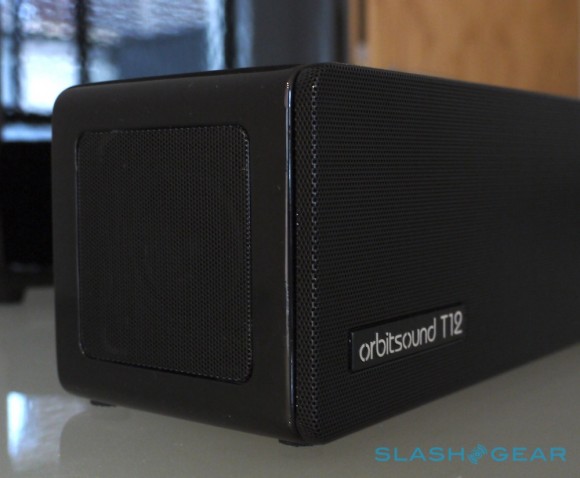 If it all sounds fiendishly complex, that’s because it is. Product manager Daniel Fletcher – son of Ted Fletcher, the audio engineer who came up with the spatial stereo technology system – explained it as the reverse of Mid-Side stereo recording, often used in studios to capture sound. What it isn’t is simply two stereo side speakers firing off the regular left and right channels to bounce against the walls.

So, complicated enough to warrant a clutch of patents, but does the T12v3 work? There’s certainly a noticeable difference between switching the system off and turning spatial stereo on, a broader, fuller sound within which we could hear differences between the left and right sides. What’s really noticeable is the ubiquity of the sweet-spot, however. Regular speaker setups usually have a certain point at which the balance of the sound is ideal: if your chair is in that position then you get the best experience, whereas everyone else around you hears a somewhat unbalanced mix depending on which speaker they’re closer to. 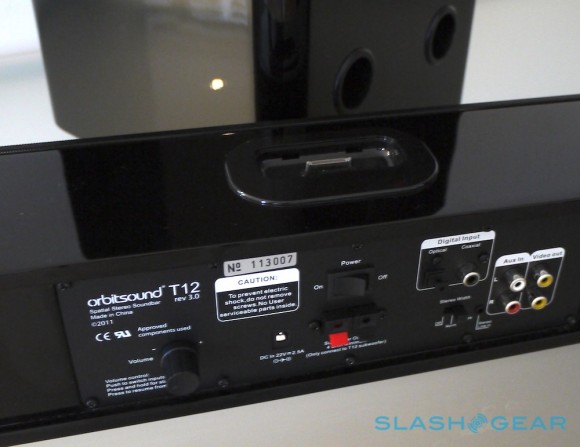 What Orbitsound has managed to do is extend that sweet-spot so that it basically fills the room. No matter whether we stood in the center, off to one side or anywhere else, the experience was pretty much the same. For a room full of people watching the same movie or TV show, that means equal sound for all; we also found that we could listen at a lower volume and still pick out the detail.

Previous iterations of the T12 were criticized for their sound quality, something Orbitsound has moved to address in this v3 model. The speaker drivers are all new and have shed any lingering muddiness in the mid-range, while the sub has also been tweaked for tighter bass response. Treated to high-bitrate tracks from an iPod, the T12v3 is now a solid music system as well as a good TV soundbar, though the subwoofer can lack a little of the immediacy of powered-subs we’ve tried.

Outfitting your lounge or home entertainment room for audio always comes with compromises. 5.1 or 7.1 speaker systems invariably offer a more involving sound, though demand you live with multiple often expensive boxes and all the cabling required to hook them up. Soundbars are easier to install and less intrusive, but generally produce 2.1 sound rather than true surround and can often do a poor job even at that. 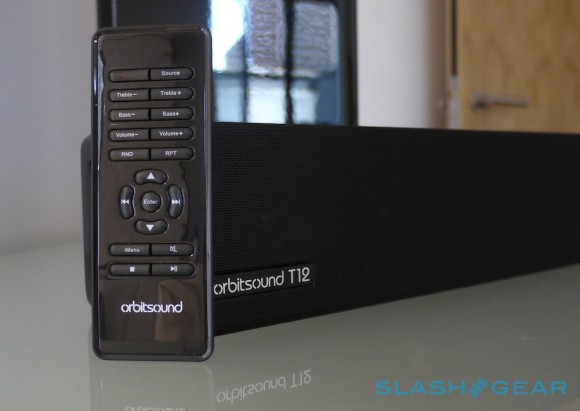 The Orbitsound T12v3 is still 2.1 only, but you’re getting impressive sound for your money. We’re still not entirely sure how the spatial stereo technology works, but it certainly makes a difference. TV and movies have a broadness and impact that belies the compact size of the soundbar itself, while music is a similar treat. Considering the £299.99 price tag the T12v3 will carry when it goes on sale in September, that’s might impressive stuff.

Next step, Orbitsound tells us, is wireless streaming, with the company auditioning several technologies for inclusion in future products. Although AirPlay is still under consideration, Fletcher expressed concerns that users might find its reliance on iTunes limiting. We don’t think Orbitsound is looking to take on Sonos quite yet – this looks to be point-to-point streaming rather than distributed whole-house audio – but with the right lossless or near-lossless technology we can see it being highly usable all the same. Why have a separate speaker system for music when the soundbar under your TV has a room-wide stereo sweetspot?

Beyond that there are ongoing talks with laptop manufacturers – apparently cautiously interested – to put Orbitsound into future notebooks, as well as compact systems that could even fit into a cellphone. For now, however, the T12v3 is the Orbitsound flagship, and it’s certainly one that deserves your audition.